The Russia-Ukraine war may have a silver lining for clean energy push, finds IEA report

The Russia-Ukraine war may have a silver lining for clean energy push, finds IEA report 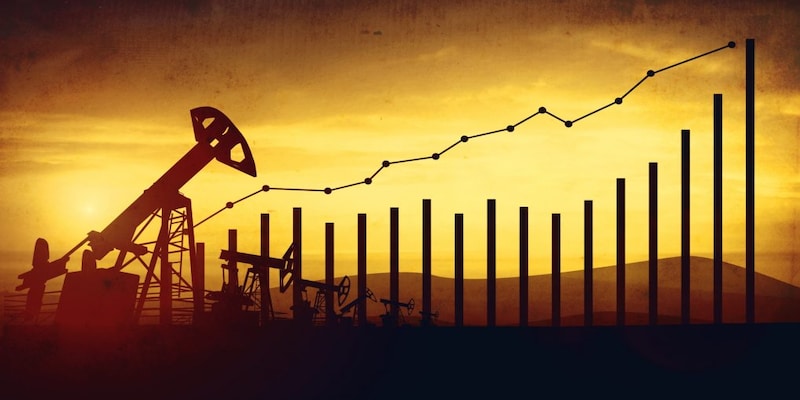 International Energy Agency (IEA) Executive Director Fatih Birol has said that 10 years from now, one might see 2022 as the year when "clean energy technologies saw a major turbocharging". Here are the key takeaways from the World Energy Outlook 2022 (WEO) report.

Russia's invasion of Ukraine has triggered an energy crisis, especially for the members of the European Union which have already cut down on energy supplies from Moscow in protest. This has led to a rise in the use and prices of fossil fuels — which indeed has a significant impact on the environment as well as the economy.

However, this "global energy crisis can be a historic turning point towards a cleaner and more secure future," shows a World Energy Outlook 2022 (WEO) report sanctioned by the International Energy Agency (IEA).
According to IEA Executive Director Fatih Birol, 10 years from now, one might see 2022 as the year when "the clean energy technologies see a major turbo charging".
Here are some key takeaways from the World Energy Outlook 2022 (WEO) report:
> Russia’s invasion of Ukraine has led to extraordinary turbulence, especially for natural gas. Russia's share of internationally traded gas, which stood at 30 percent in 2021, falls to 15 percent by 2030 in the Stated Policies Scenario (STEPS) and to 10 percent in the Announced Pledges Scenario (APS).
> For the first time, global demand for each of the fossil fuels shows a peak or plateau across all WEO scenarios, the report said. The share of fossil fuels in the "global energy mix has been stubbornly high", at around 80 percent, for decades. However, by 2030 in the STEPS, this share falls below 75 percent, and to just above 60 percent by 2050.
This comes as Russian exports are falling significantly even as the world energy order is reshaped. Notably, Russia, by far, is the most important market to Europe and before its invasion of Ukraine, it was the world's largest fossil fuel exporter.
> The world should see fossil fuel usage peak in the 2020s though the current crisis should "provides a short-term boost to demand for oil and coal as consumers scramble for alternatives to the high-priced gas".
However, according to the report, coal demand should peak within the next few years, natural gas demand reaches a plateau by the end of the decade, and oil demand reaches a high point in the mid‐2030s before falling. 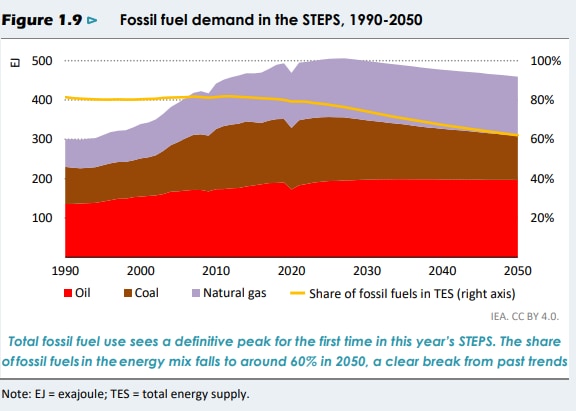 (Credit: WEO report)
As a result, the total demand for fossil fuels should continue declining steadily from the mid‐2020s by around 2 exajoules (EJ) (equivalent to 1 million barrels of oil equivalent per day ) every year on average to 2050, the report finds.
By 2030, fossil fuels should account for less than three‐quarters of the total energy supply, and by 2050 their share falls to just above 60 percent.
Other Important Findings
> It is estimated that 75 million people who recently gained access to electricity are likely to lose the ability to pay for it. Also, 100 million people who have gained access to cooking with clean fuels may forgo it on cost grounds, returning instead to the use of traditional biomass.
> Policy and technology changes since the Paris Agreement in 2015 have reduced the projected temperature rise, but there is still a large gap between today’s pledges and a stabilisation of the rise in global temperatures around 1.5 °C.
> Some 128 countries currently lack universal access to clean cooking, but only 39 of them have clean cooking targets, and fewer than half of these are targeting universal access by 2030.
> In the Stated Policies Scenario (STEPS), CO2 emissions reach a plateau in the mid‐2020s at 37 Gt and thereafter fall slowly to 32 Gt by 2050. "This decline represents a break in the close historical relationship between growth in GDP and growth in emissions". (Credit: WEO report)
> A new energy security paradigm is needed to maintain reliability and affordability while reducing emissions
> The overall effects of polluted air on public health continue to worsen through 2050 – especially in Asia – because of population growth and urbanisation and because of the time lag between exposure to pollution and health problems and premature death.
Clean energy transition
Fatih Birol said he was "very optimistic" about seeing an acceleration of clean energy transitions amid this crisis. "New policies in major energy markets help propel annual clean energy investment to more than USD 2 trillion by 2030 in the STEPS, a rise of more than 50% from today," the report said.
It adds that the increase in renewable electricity generation is fast enough to outpace growth in total electricity generation. This is driving down the contribution of fossil fuels for power. Clean energy supply chains are also a source of employment and growth.
The report batted for goals and plans for scaling up investment in clean energy transitions, and on what governments can do to incentivise this. It predicted that demand for critical minerals for clean energy technologies is set to rise sharply, "more than doubling from today’s level by 2030 in the Announced Pledges Scenario (APS)".
Supply chains for some key technologies – including batteries, solar PV, and electrolysers – are expanding at rates that support greater global ambition.
"Copper sees the largest increase in terms of absolute volumes, but other critical minerals experience much faster rates of demand growth, notably silicon and silver for solar PV, rare earth elements, wind turbine motors and lithium for batteries," it said.
The report said that a smooth and secure energy transition will require a major uptick in clean energy investment flows. "While clean energy investment rises above USD 2 trillion by 2030 in the States Policies Scenario, it would need to be above USD 4 trillion by the same date in the Net Zero Emissions by 2050 Scenario, highlighting the need to attract new investors to the energy sector," it said.
(Edited by : Abhishek Jha)
Check out our in-depth Market Coverage, Business News & get real-time Stock Market Updates on CNBC-TV18. Also, Watch our channels CNBC-TV18, CNBC Awaaz and CNBC Bajar Live on-the-go!