Alarm bells have been already sent with at least 12 states likely to be hit severely in the coming weeks with the country approaching its peak summer season when the demand for power would see a sharp jump.

India is staring at yet another power crisis in less than a year thanks to coal shortage. Alarm bells have been set ringing with at least 12 states likely to be hit severely in the coming weeks with the country approaching its peak summer season when the demand for power would see a sharp jump. The high prices of global coal and low imports are expected to worsen the crisis.

But why, after seeing a severe shortage of coal last year, has India failed to prevent the crisis this year?
First things first, the supply-demand gap has been increasing consistently. India's power demand during April last year reached a high of 182.37 gigawatts (GW), which only increased to 200 GW in July 2021. Experts predict that the power demand is likely to surpass even the July 2021 peak this year as we approach peak of summer in a few weeks and industry activities speed up.
For Q4 FY22, the daily peak power demand has already averaged at 187 GW. During April 1-12, the average daily peak demand stood at more than 194 GW.
The peak power demand in April 2020 was 132.73 GW and it was 176.81 GW in April 2019.
"Last three years, we saw a lull because there was less demand uptick. Now the demand uptick has picked up. The PLFs (Plant Load Factors) have gone up. For every one percent PLF increase, the coal demand goes up by 10 million tonne. And it's already 10 percent more than what it used to be. So there is 100 million tonne extra demand that has come up. Naturally there is some pressure," said Partha Bhattacharya, former Chairman of Coal India, in an interview with CNBC-TV18.
Heavy dependency on coal and one player
India is heavily dependent on coal-based power generation. The coal-based power generation accounts for a capacity of around 210 gigawatts (GW) of the total 396 GW, about 53 percent of the country's total capacity, as of March 2022.
However, the country has less coal miners when compared to the demand for it.
Coal India contributes the bulk, at nearly 83 percent, of the total production but coal stocks in March in the company's pitheads and thermal power generation stations stood at 74 mt, about half of last year's 128 mt.
"We have not really focused on creating more players in the coal mining space, all efforts have not yielded much results so far. Now something is happening, like commercial mining is about to start or maybe it will start in next one or two years or something like that. But it's only Coal India, we have been depending on only one company for all these years. And that's not the way," said Bhattacharya.
"India is too big a country to be met - the demand to be met by only one company or maybe the public sector companies. There is no complimentary production of coal that's happening in the commercial mining space, or not much even in the captive mining space. So that is one problem," he added.
One of the key factors that played a role in the falling domestic stocks of coal was heavy rainfall last year in states like Jharkhand, Odisha, West Bengal, Bihar, Chhattisgarh, Telangana and Madhya Pradesh, that have most of the reserves.
Power plants' inventories had an average coal stock of only nine days at the beginning of financial year 2023, the lowest since at least 2014, as per reports. Federal guidelines require power plants to have on an average at least 24 days of stock.
Additionally, last year, as the prices of imported coal jumped, a 12 percent fall was reported in imports as the companies shifted to domestic coal.
The foreign coal prices have yet again jumped due to the supply disruption caused by the Ukraine-Russia crisis, which will likely keep the rates elevated in the near future as well, discouraging coal imports by firms. 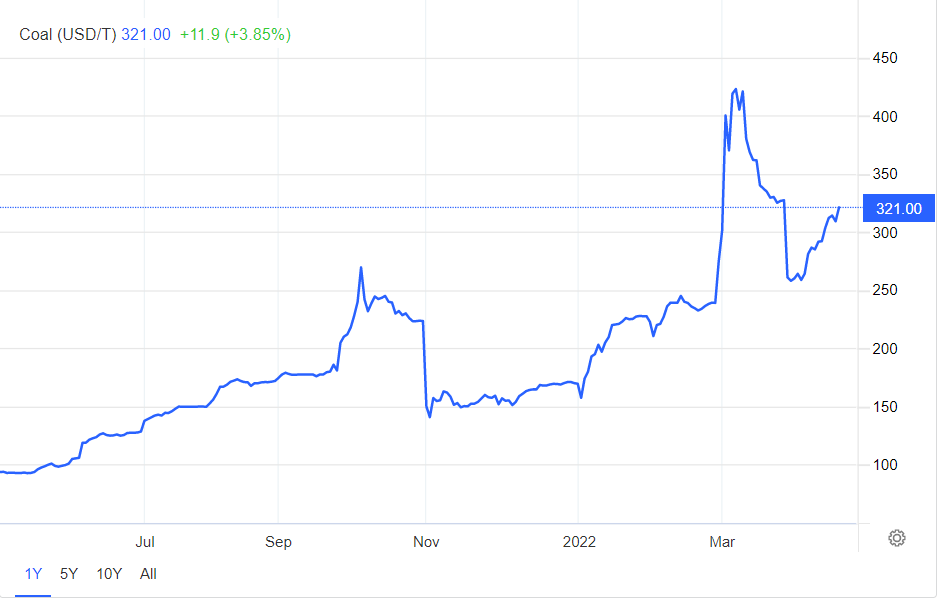 Image: Trading Economics
According to ICRA, the conflict could push the price of imported coal higher by 44-55 percent in the first quarter of FY23.
Besides, as reported, there has been a lack of coordination between the three ministries involved in the process -- Power, Coal and Railways.
However, Bhattacharya said that Coal India and the Railways "have stretched themselves quite a bit and the supplies have increased. In fact, last year, Coal India could supply about 17 percent more coal to the power stations as compared to the previous year. Even this year, the supply has gone up. In the past 18-20 days, the supply is about 14-15 percent more."
Also Read | Half of 54 private sector thermal power plants grappling for coal stocks
Check out our in-depth Market Coverage, Business News & get real-time Stock Market Updates on CNBC-TV18. Also, Watch our channels CNBC-TV18, CNBC Awaaz and CNBC Bajar Live on-the-go!