Updated : December 12, 2019 07:46 PM IST
With just over two years to go for 2022, the deadline for achieving 100 GW target of solar power, India currently has about 32 GW of installed solar power since 2016, while another 68 GW still needs to be installed.
Poor progress in the solar rooftop sector, the impact of the Goods and Services Tax and lack of domestic solar manufacturing capacity were some of the concerns highlighted by the panel in its report.

While the Indian environment minister lauded the country’s progress on renewable energy, at the ongoing UN climate conference in Madrid, a latest report warns that the government is faltering on its progress to meet solar power targets.

The note of caution came in the December 6 report of a  parliament committee on energy that expressed “deep concern” that the Indian government’s ministry of new and renewable energy (MNRE) has “continuously failed” to achieve its yearly targets of installing renewable energy.

In 2015, before the UN climate conference in Paris, the Indian government announced its solar energy ambitions targeting 100 gigawatts (GW) of installed solar power by 2022. This was part of the total target of 175 GW of renewable energy by 2022 that India announced at Paris. Thereafter, India announced an increase of its renewable energy targets to 450 GW at the Climate Action Summit in New York in September 2019.

Of the 100 GW solar power target, 40 GW is to be generated from solar rooftop. The committee, however, noted that given the government’s performance on this front, the solar power goal is unrealistic and should be reconsidered otherwise it could “derail the entire National Solar Mission”. The committee noted “as per the year-wise targets set” by the MNRE “there should have been an installed Roof-top Solar Power (RTS) capacity of 16,000 MW (16 GW) by 2018-19.” However, as of October 15, 2019, only 1.82 GW of rooftop solar capacity has been installed.

The parliamentary committee led by Janata Dal (United) leader Rajiv Ranjan Singh expressed scepticism about the ministry’s assurance of time-bound achievement of targets. It noted that the ministry has a huge task before it to commission the remaining 68 GW installed capacity in “just about two and a half years” to achieve its 100 GW solar power target by 2022, with an average target of more than 27 GW per year.

The warning by the parliamentary panel comes while the Indian government pats its back for the ambitious target of 175 GW of renewable energy by 2022. On December 10, 2019, Indian government’s Environment Minister Prakash Javadekar while speaking at the Conference of Parties under the UN Framework Convention on Climate Change (UNFCCC COP25), in Madrid, Spain, said India is making progress in the sector. “Prime Minister Modi announced 175 GW targets for renewables under Paris Agreement. We have already achieved 83 GW. Prime minister has subsequently increased the target to 450 GW at the recent UN Climate Action Summit. We are simultaneously progressing on solar, biomass and wind energy,” said Javadekar.

The report recommended that the MNRE should strive to achieve the target of 8.5 GW set for the year 2019-20, play a proactive role in monitoring the progress of various solar energy projects and should work towards solutions for the constraints to commissioning of solar projects in a time-bound manner. Specifically, on solar rooftop projects, the committee recommended simplifying and speeding up the process of subsidy disbursement and increasing awareness about rooftop solar projects and its incentives among the public. 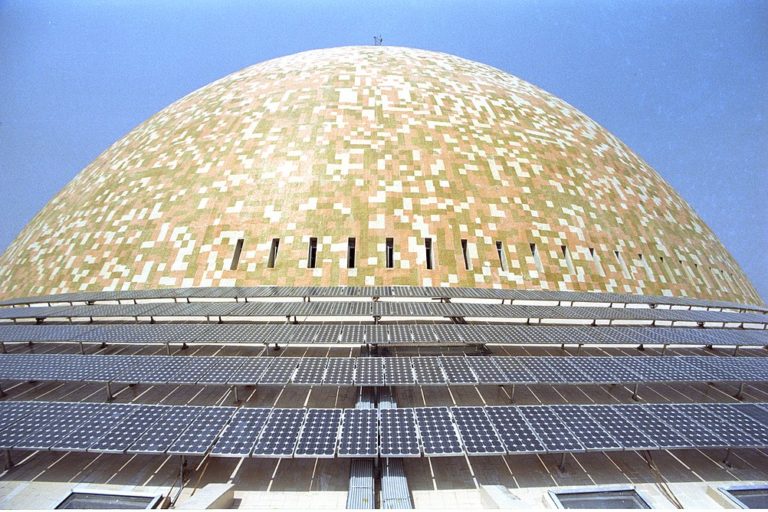 Solar rooftop sector in India has still not taken off. Photo by Biswarup Ganguly/Wikimedia Commons.

Amit Kumar, who is senior director, social transformation at Delhi-based The Energy and Resources Institute (TERI) explained that “there are several issues that have cropped up lately” while responding to Mongabay-India’s queries regarding impediments faced by the solar sector.

However, while deposing before the committee, the ministry defended its position and said, “there is no shortfall in achievement of target.”

“However, major constraints being faced by the developers in commissioning of solar are land acquisition, evacuation infrastructure, non-conducive state policy for development of solar and business environment such as willingness of discoms to purchase solar power,” explained the ministry while adding that it is making concerted efforts to sort out the issues with the help of all stakeholders.

MNRE’s Secretary Anand Kumar told the committee that they are confident that by 2022 they would not only achieve the target but we would exceed the target.

Is Goods and Services Tax (GST) playing spoilsport in the solar sector’s growth?

The committee further noted that that prior to the implementation of Goods and Services Tax (GST), the goods/equipment/material required for setting up of solar power generating systems were exempt from payment of central excise duty.

But, as per the notified GST rates, the committee noted that renewable energy devices and spare parts have a five percent GST on them and that “there are a lot of disputes/ambiguities regarding the applicable rate of GST on solar power generating systems”.

“This prevailing ambiguity regarding applicable rate of GST is not healthy for the renewable energy sector as renewable energy devices and spare parts have been kept in five percent GST slab whereas the effective rate has come out to be about nine percent. Such a situation will lead to an increase in generation cost and pose a threat to the viability of the ongoing projects, ultimately hampering the target achievement,” noted the committee in its report.

On concerns regarding the GST, TERI’s Amit Kumar remarked that “consistency and uniform interpretation of GST on various components could be an area of concern to solar power players.”

The parliamentary panel also expressed concerns about the lack of domestic solar manufacturing capacity in India noting that over-reliance on any single foreign country puts Indian solar sector at risk of disruption in supply chain and cripple indigenisation of the sector. “Renewable energy sector cannot be sustained on imported equipment in the long term,” noted the committee and recommend that the MNRE should urgently formulate a dedicated programme to support solar manufacturing in India.

MNRE’s secretary Anand Kumar told the parliamentary committee that “today, around 85 percent of solar equipment, solar cells and modules, have been imported from China and other countries like Vietnam and Malaysia etc” and “this is a major concern.”

TERI’s Amit Kumar said that the “government has initiated many initiatives in this regard such as NTPC’s bid for solar having domestic content only or SECI’s (Solar Energy Corporation of India) bid for solar linked to indigenous manufacturing.”