Fuel prices step back from record highs, Petrol cheaper by Rs 4.37 in Mumbai

Fuel prices step back from record highs, Petrol cheaper by Rs 4.37 in Mumbai 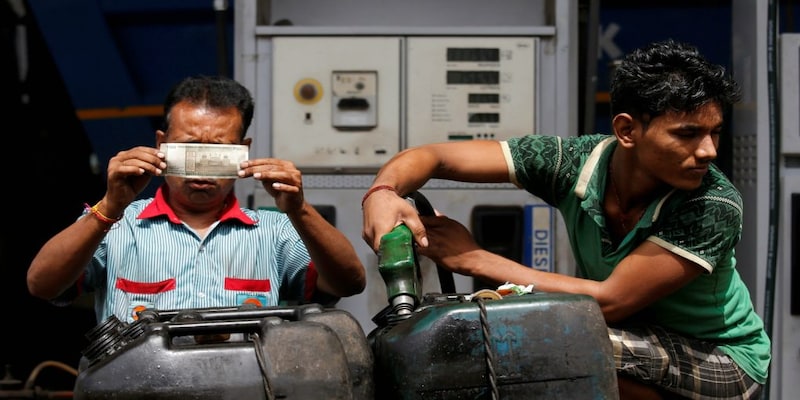 Fuel prices across major metros receded from record highs on Friday after the government reduced excise duty on petrol and diesel by Rs 1.50 per litre.

Fuel prices across major metros receded from record highs on Friday after the government reduced excise duty on petrol and diesel by Rs 1.50 per litre.

In Mumbai, petrol prices were down by Rs 4.37 to Rs 86.97 a litre while diesel declined by Rs 2.65 to Rs 77.45 a litre.
Other metro cities witnessed a price decline too. In New Delhi, petrol and diesel prices fell by Rs 2.50 to Rs 81.5 a litre and Rs 72.95 a litre respectively.
In Kolkata, petrol prices were lower by Rs 2.45 to Rs 83.35, while diesel prices dropped by Rs 2.50 to Rs 74.80 per litre. Fuel prices in Chennai also fell to Rs 84.70 per litre, down Rs 2.63 a litre, while diesel prices dropped to Rs 77.11 per litre.
Since mid-August, the petrol and diesel prices had been on the rise- the most in any six weeks after the daily price revision was introduced in mid-June last year. Various factors including rupee depreciation, high excise duty and rise in Brent crude oil rates have led to soaring domestic fuel prices.
Relief To Common Man
On Thursday, finance minister Arun Jaitley announced additional excise cut by Rs 1.5 per litre on fuels which will be borne by the government. The total benefits to consumers will come around Rs 2.5 per litre on both petrol and diesel.
Following the centre's path, Gujarat government also reduced petrol and diesel prices by Rs 2.50 per litre, while Maharashtra lowered petrol prices by 2.50 per litre.
Chhattisgarh, Assam and Tripura also cut fuel prices by Rs 2.50 per litre, but Andhra Pradesh and flood-hit Kerala refused the centre's request.
Shares of oil marketing companies such as Hindustan Petroleum Corp, Bharat Petroleum Corp and Indian Oil Corp tanked more than 20 percent on Thursday following the fuel price cut as now they will absorb Re 1 per litre cut on petrol and diesel.
Have you signed up for Primo, our daily newsletter? It has all the stories and data on the market, business, economy and tech that you need to know.
Check out our in-depth Market Coverage, Business News & get real-time Stock Market Updates on CNBC-TV18. Also, Watch our channels CNBC-TV18, CNBC Awaaz and CNBC Bajar Live on-the-go!