Explainer-Weakest link? Why Russian gas puts Europe in a bind over Ukraine

Explainer-Weakest link? Why Russian gas puts Europe in a bind over Ukraine 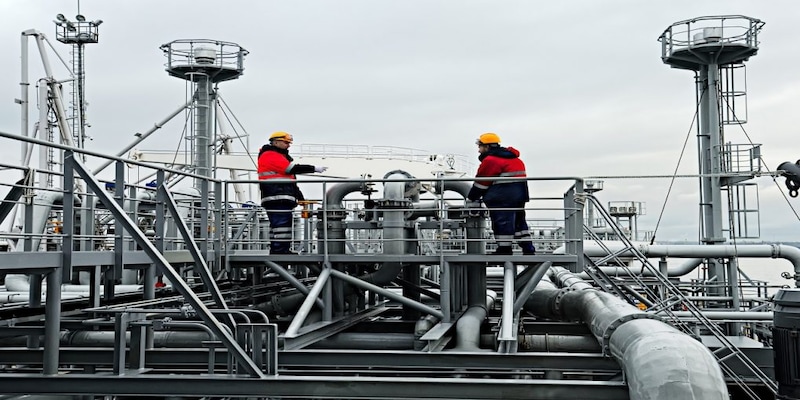 Even without a build-up of Russian forces on Ukraine's border and US warnings of painful sanctions if tanks rumble across, the world's oil and gas producers have struggled to meet global demand, pushing crude prices to their highest since 2014 and driving European gas prices to stratospheric levels last year.

Escalating tensions between the West and Russia over Ukraine have raised concerns about vital Russian oil and gas flows to Europe, prompting the United States to offer reassurances that it will help its European allies find alternative supplies.

But that task may be mission impossible for Washington.
Even without a build-up of Russian forces on Ukraine's border and US warnings of painful sanctions if tanks rumble across, the world's oil and gas producers have struggled to meet global demand, pushing crude prices to their highest since 2014 and driving European gas prices to stratospheric levels last year.
Russia denies it has plans to invade. But if a crisis does flare, there are few, if any, alternatives to fill a gap caused by any disruption to supplies from Russia, one of the world's top three oil producers and the second biggest gas producer.
HOW RELIANT IS EUROPE ON RUSSIAN OIL AND GAS?
In a word, very.
Russia supplies the European Union with about a third of its requirements for crude and gas. Gas is mainly pumped via pipelines that transit Ukraine or other eastern European nations, heating homes and powering industry across the 27-nation bloc and its neighbours, such as Britain.
Russian supplies have become increasingly important as Europe's own oil and gas production, mainly from the North Sea, have dwindled, although Norway - the biggest North Sea producer - still supplies about a third of Europe's gas requirements.
WHY NOT BUY MORE FUEL FROM THE MIDDLE EAST AND BEYOND?
Some European states, particularly those once in the Soviet Union's orbit, have long complained that the EU has become too dependent on Russian gas. But changing the balance is not easy.
European states have built or expanded terminals to receive liquefied natural gas (LNG) shipments from the Middle East, the United States or elsewhere. Gas also comes to Europe via pipelines from North African producers.
Yet Russia still dominates, with its abundant gas reserves, the proximity of its fields and an extensive existing pipeline network. And its dominance shows no sign of waning, a major new pipeline has just been built from Russia under the Baltic Sea to Germany, known as Nord Stream 2, although it hasn't started up yet amid a dispute fuelled by the latest political tensions.
WHY WOULD A DISRUPTION TO RUSSIAN SUPPLIES HURT SO MUCH NOW?
Global energy markets are particularly tight at the moment, after a rollercoaster ride over the past two years.
The immediate reason was the COVID-19 pandemic. First, oil and gas prices went through the floor as economies locked down and factories ground to a halt, prompting energy producers to scrap investment plans. Then, the global economy came roaring back, but there was no extra capacity to meet surging demand.
Yet that's only part of the story. The recipe for tight markets has been brewing for a while. The green transition has discouraged producers, particularly major Western firms, from investing so heavily in fossil fuels. Several majors have started to shift focus towards renewable energy projects. The problem is that the fossil fuel crunch is being felt now, while the renewable energy benefit will take years to kick in.
To put the challenge in numbers: the world consumes about 100 million barrels per day (bpd) of oil, with Russia accounting for about 10% of that. The world's spare capacity, or the amount of extra production that can be switched on fairly swiftly to meet a sudden disruption, stands at below 3 million bpd according to some of the more generous estimates - and it may be less. That extra capacity, which largely sits in Saudi Arabia and other Gulf states, can't fill a big gap left by Russia.
The gas market offers a similar picture. A few years ago, the market was set for an LNG glut. Now, gas has increasingly become a favoured green transition fuel because it produces lower emissions than coal and oil, so demand has rocketed and the global market has become as tight as a drum.
SO WHERE CAN WASHINGTON FIND EXTRA SUPPLIES FOR EUROPE?
Good question. The administration of President Joe Biden doesn't have a lot of options.
The U.S. government has held talks with international energy firms about supplying more gas to Europe, U.S. officials said this month. But industry sources said the companies responded by pointing out just how tight the market was.
Washington cannot turn to its own producers to fill a gap.
U.S. energy firms, which rely on costly hydraulic fracturing technology, or fracking, have transformed the United States into a major energy exporter. But they were hammered harder than most by the 2020 price plunge. Projects were put on hold and only one LNG facility now being built could add extra capacity this year.
Even if Washington can find more oil via the spot market for Europe, diverting gas cargoes will prove a bigger headache. Gas tends to be sold via long-term contracts and making adjustments is therefore trickier.
Qatar, a U.S. ally in the Gulf and a major LNG exporter, has told Washington it would be ready to reroute cargoes but said it would need U.S. help persuading other buyers to accept such a move, a source said in January.
Asian nations are major buyers of Qatari gas, including China.
SO WHAT DOES THIS MEAN FOR EUROPEAN CONSUMERS?
A disruption to Russian energy supplies would send already red-hot electricity and gas bills higher still for European households.
The impact on oil prices would be almost immediate, but a lag in passing wholesale gas market prices onto utility bills mean the surge may also take six to nine months to trickle through, prolonging the pain.
(Writing by Edmund Blair: Editing by Dmitry Zhdannikov and Carmel Crimmins)
Check out our in-depth Market Coverage, Business News & get real-time Stock Market Updates on CNBC-TV18. Also, Watch our channels CNBC-TV18, CNBC Awaaz and CNBC Bajar Live on-the-go!