The jobless rate in urban areas saw a marginal drop from 7.7 percent to 7.2 percent but a drastic jump from 5.8 percent to 8.04 percent in rural India pointing to reduced labour participation, as per CMIE data.

India’s unemployment rate in October 2022 increased to 7.8 percent from 6.4 percent in the previous month, according to data from the Centre for Monitoring Indian Economy (CMIE).

However, the jobless rate in urban areas saw a marginal drop from 7.7 percent to 7.2 percent but a drastic jump from 5.8 percent to 8.04 percent in rural India pointing to reduced labour participation, as per CMIE data.
Though there has been a significant rise in the rural unemployment rate on a month-on-month basis, it is similar when compared to the previous years. In October 2021 and 2020, it stood at 7.7 percent and 7 percent, respectively. In the pre-pandemic October 2019, it was 8.1 percent.
This year, Haryana saw the highest unemployment rate (31.8 percent) in October followed by Rajasthan (30.7 percent) and Jammu and Kashmir (22.4 percent). Madhya Pradesh (0.8 percent) and Chhattisgarh (0.9 percent) and Odisha (1.1 percent) witnessed the lowest jobless rate.
Hiring slowdown
The hiring activity during the month also reflected a similar trend as the monthly Naukri Jobspeak index shows recruitment slowed owing to festivities and stayed flat compared to the last year. At 2,455, the index is at its lowest level in 2022.
However, the report suggests it is still on an upward trajectory when compared with last year’s festive window in November 2021, where the index recorded 2,173.
Also Read | Techies, e-commerce employees likely to get over 10% salary hike in 2023: Survey
Pawan Goyal, Chief Business Officer, Naukri.com, said, “The temporary deceleration in hiring activity was expected given the festive season, however when you compare the data with last year’s festive window (November 2021), the index is a healthy 13 percent ahead which is reassuring. It is also interesting to note that most key industries maintained hiring expansion during this month which is likely to only get stronger as year-end approaches.”
Among sectors, the insurance sector in the country continued to witness phenomenal growth of 93 percent due to an increase in demand for professionals across experience bands, the Naukri.com report suggests.
Other sectors that continued to show upward hiring trends are banking, financial services and insurance (BFSI), oil, travel and hospitality, real estate, and auto. 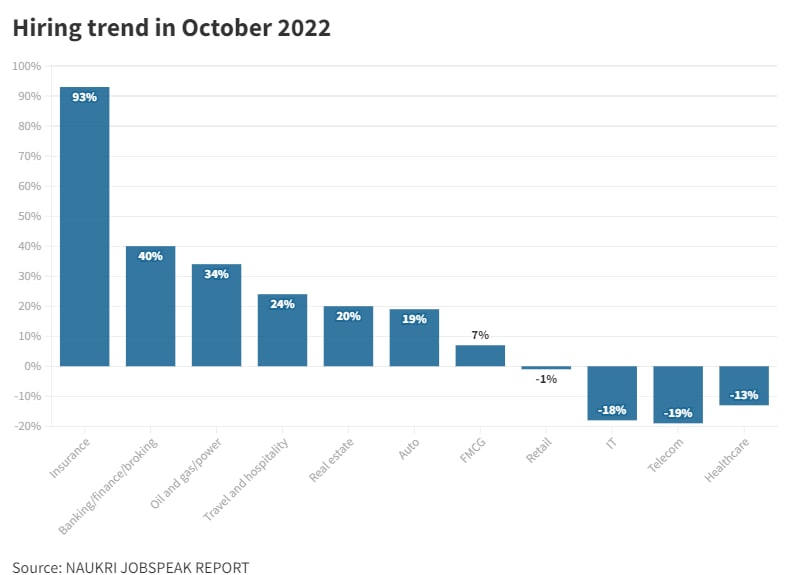 The report added that hiring in the IT sector slowed down as there has been a drop of 18 percent in October compared to the same month last year. Apart from IT, other sectors recorded a notable decline in hiring sentiments including telecom and healthcare.
Also Read | Over 53% IT professionals likely to resign to pursue new job within next year: Report
Among cities, while hiring in Kolkata and Mumbai continued to grow, Delhi stayed flat compared to October last year. As the IT sector showed a decline, hiring in tech hubs Bengaluru, Hyderabad and Pune also slowed.
Check out our in-depth Market Coverage, Business News & get real-time Stock Market Updates on CNBC-TV18. Also, Watch our channels CNBC-TV18, CNBC Awaaz and CNBC Bajar Live on-the-go!