Where have all the women gone from Elon Musk's Twitter? 'Before & after' office photos shock internet

Where have all the women gone from Elon Musk's Twitter? 'Before & after' office photos shock internet 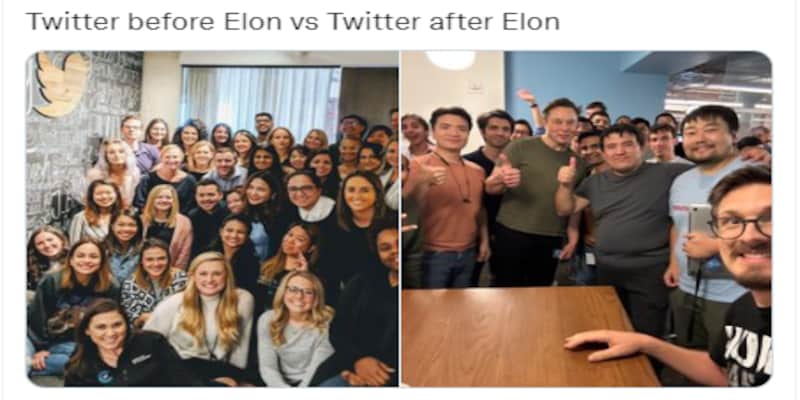 Twitter layoffs: Are there fewer women left at Twitter since Elon Musk laid off nearly half of the workforce while many others have resigned after the 'hardcore' work environment ultimatum?

Over 3,700 Twitter employees are out — they have either been laid off or  exited on their own. As the staff adjusts to the norms laid down by new boss Elon Musk, a photo comparison has emerged on the microblogging site pointing out the “missing women” at Twitter’s office since the billionaire’s entry into the firm.

YouTuber Lauren Chen on Sunday, November 20, posted photos of a Twitter office before and after Musk took control of the firm following a $44-billion takeover. The first photo shows a mix of female and male employees posing for a group picture while the second one shows a majority of men and hardly any women employees (about two to three can be spotted) getting clicked with Musk.

CNBCTV18.com could not independently verify the first image that is claimed to be from a time before the billionaire bought Twitter. The second one was recently shared by Musk from his handle and was captioned, “Just leaving Twitter HQ code review.”
The two photos shared by Chen have gone viral, leaving the internet in shock, with people wondering where all the women went after the Musk came in. Several tweeple questioned the lack of gender equality among the Twitter workforce, as is visible in the latest photo.
Also Read: From mass layoffs to resignations: How Elon Musk's Twitter went from 7,500 to 2,900 employees in three weeks
A few of them also compared the scenario to ex-US president Donald Trump's Cabinet, which had only a handful of women.
However, when the first photo was clicked is not immediately clear as one of the users posted another tweet in a reply saying, “Little facetious to share a pic of the @TwitterComms team and compare it to a room of engineers, innit?”

Little facetious to share a pic of the @TwitterComms team and compare it to a room of engineers, innit?https://t.co/Q8VWlTS0rY

Another person commented, “Where are the black people?” while a few others stressed that the team is now more culturally diverse because of more Asian employees. A user said, "Asia is well represented."
Also Read: Twitter in hot water for not giving advance notice to laid off employees
Meanwhile, according to a Bloomberg report, Musk is considering firing more Twitter employees as soon as Monday, November 21, this time targeting the sales and partnership side of the business after mass resignations among engineers last week.
Also Read: What the future could mean for Elon Musk's Twitter
(Edited by : Shoma Bhattacharjee)
Check out our in-depth Market Coverage, Business News & get real-time Stock Market Updates on CNBC-TV18. Also, Watch our channels CNBC-TV18, CNBC Awaaz and CNBC Bajar Live on-the-go!