Today is World Food Day and India has slipped to 102nd position in the Global Hunger Index 2019 of 117 countries, behind its neighbours Nepal, Bangladesh and even Pakistan.

Today is World Food Day and India has slipped to 102nd position in the Global Hunger Index 2019 of 117 countries, behind its neighbours Nepal, Bangladesh and even Pakistan, which used to be the only nation in South Asia to rank below India. The report, prepared jointly by Irish aid agency Concern Worldwide and German organisation Welt Hunger Hilfe, termed the level of hunger in India "serious".

In 2000, India was ranked 83 out of 113 countries. Now, with 117 countries in the fray, it has dropped to 102nd rank.
Its GHI score has also decelerated — from 38.9 in 2005 to 32 in 2010 and then from 32 to 30.3 between 2010 and 2019.
Countries like Yemen and Djibouti, which are conflict-ridden and facing severe climate issues respectively, fared better than India on that front, according to the report.
While the data highlights the alarming hunger level in the country, it is to be noted that food safety, too, remains to be an equally critical issue, if not more.
So how safe is the food that we eat? Is there a way one can judge the level of contamination from the source of consumption? Are there other external factors that play a role on food adulteration or the quality of food that we consume? The Food Safety and Standards Authority of India has some hard-hitting data in its annual report, which was accessed by CNBC-TV18's Priya Sheth.
The data, which was represented in the form of ‘annual public laboratory testing reports for the year 2017-18', shows that close to a quarter or 25 percent of the samples analysed were found to be adulterated or misbranded.
The data shows that 99,353 food samples were analysed by the public labs in the year 2017-18 with an aim to check on adulteration and misbranding. These samples were collected across almost all food categories right from loose to packaged commodities.
In 2012-13, testing revealed that the adulteration rate of food samples collected stood at 15 percent, and this number has constantly been increasing over the years.
While category wise break up is not available, state-wise break-up reveals that Mizoram, Rajasthan, Uttar Pradesh and Jharkhand have the highest adulteration rates. States like Arunachal Pradesh, Goa and Chandigarh have the lowest adulteration rates in 2017-18. 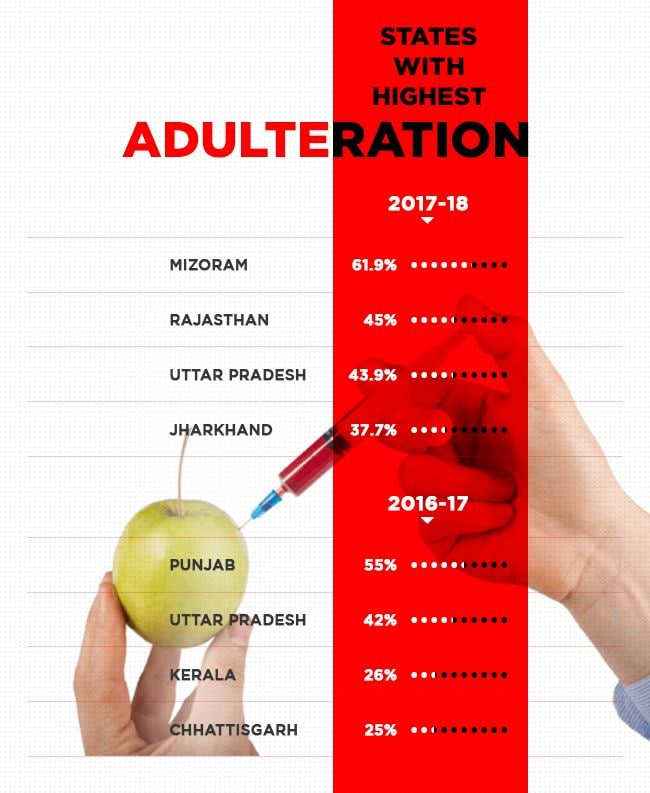 The FSSAI, however, told CNBC-TV18 that the increase in adulterated or misbranded samples means that officers are conducting more targeted sampling or are aware of the pockets where high adulteration rates could prevail. This 25 percent does not mean that a quarter of the food available in India is adulterated or misbranded, the authority said.
"The authority in its capacity has been working on increasing manpower, resources and having better-structured inspections to tackle food adulteration," it added.
(Inputs from PTI)
Check out our in-depth Market Coverage, Business News & get real-time Stock Market Updates on CNBC-TV18. Also, Watch our channels CNBC-TV18, CNBC Awaaz and CNBC Bajar Live on-the-go!