Will urban outrage over environmental apathy reflect in voting?

Updated : March 21, 2019 04:15 PM IST
Over the past 10 years, many Indian cities have witnessed citizen activism towards environmental issues like air pollution, poor waste management, felling of trees and water scarcity.
Though environmental issues are now part of election manifestos of various political parties, experts believe they are far from shaping voting preferences of urban citizens
In the 2019 parliamentary elections, about 200 of the total 543 Lok Sabha seats fall in the urban and semi-urban areas.

Whether it was the intense public protest in Delhi last June, over the proposed cutting of thousands of trees, or protests in Bengaluru since 2017 against tree felling for a flyover, environmental issues over the past few years are increasingly a part of the urban citizen’s priority.

But will the outrage by urban dwellers against the government’s apathy towards environmental issues reflect in their votes in India’s upcoming general elections?

Political experts, as well as environmentalists, believe that compared to the past, environmental issues are now certainly gaining prominence in the election discourse but are still not a major influencing factor on voting preferences.

The elections for 543 parliamentary seats are scheduled for April-May 2019. Of the 543 seats, nearly 70 seats are considered purely urban and the number increases to about 200 seats if the semi-urban areas are also included.

Environmental problems such as air pollution, felling of trees, threats to green spaces, waste management and water scarcity have seen citizen activism in urban areas over the past few years.

For instance, a serious public movement started in Delhi after the national capital had been regularly featuring in the list of most polluted cities in the world for the past 10 years. It led to concerned citizens pressurising policymakers to take action to address air pollution. Public protests even stopped a redevelopment project by the national government in the heart of Delhi which would have led to cutting down of thousands of trees.

Similarly, residents of Delhi’s neighbouring city of Gurugram came together to start a campaign “No Aravallis No Vote” to protest against the government’s move to dilute rules which would have resulted in opening up of forests in Haryana for non-forestry purposes.

Other metros too saw citizen activism on green issues. People came together to protest against tree felling for a flyover in Bengaluru, while in Mumbai citizens have been protesting against the diversion of a green patch in the lush Aarey Milk Colony for a metro shed. Last year, Shimla, a popular tourist destination in northern India, faced a severe water crisis.

Nationalism, caste, religion, prominent leaders, agriculture are some of the usual influencing factors on the Indian voter. But will green issues make an impact this time round?

Is Environment An Important Election Issue In Urban Areas?

On February 19, a group of Delhi-based environmentalists got information that an old semal (red cotton tree or Bombax ceiba) tree was being cut in the Green Park area of south Delhi. Within a couple of hours, many of them reached the spot, fought with officials who had given the permission to cut it and saved it from being cut. By that evening, the Delhi government’s forest department issued another order temporarily suspending the permission given for axing the tree.

Delhi-based environmentalist Bhavreen Kandhari stated that one of the reasons behind cutting that tree in Green Park – according to officials on the spot – was that people were slipping due to the flowers of the tree that had fallen on the ground. She said if such a small reason can be behind people opting to axe a tree then how can one expect them to decide their voting preference on the basis of environmental issues. The Semal tree which was under the axe in Green Park area of Delhi. Photo courtesy of Bhavreen Kandhari.

She also informed that in the run-up to the 2019 Lok Sabha elections a group of activists and environmentalists, including her, have had meetings with the leaders of the Congress and the Aam Aadmi Party over green concerns.

“Citizens in urban areas are certainly talking and discussing about environmental issues but I don’t think it will be such a huge issue that it would impact their voting preferences. The political parties are aware about this reality and that is why they also just do lip service about the issue,” Kandhari told Mongabay-India.

Bharati Chaturvedi, who is the founder of Chintan, an NGO working on environmental research and action, expressed similar sentiments.

“I don’t think environmental issues would directly be a big deal and the reason is that the urban dwellers have not had the kind of protests and marches that farmers had on issues of our concerns. The urban voters have not shaken up the political class as yet,” said Chaturvedi.

Sanjay Kumar, who is a director at the Centre for the Study of Developing Societies, totally dismissed the idea of environmental issues currently playing a role in India’s elections.

“Not even half percent or even 0.1 percent. The voters are concerned about environmental issues but it is not shaping their voting preference. They get concerned about environmental issues but only when they think it has become difficult for day-to-day living. But even in those cases once that situation is over everyone forgets about it,” Sanjay Kumar told Mongabay-India.

“The environmental concern comes and goes. In the 2019 elections, this is not going to matter. During our surveys, when we ask people about issues impacting their voting preferences, we would not even get 50 people after 10,000-20,000 interviews who would say that environment is an issue,” Kumar said.

Environmental Issues Are Getting Attention From Political Class

Last year, the AAP-led Delhi government presented a green budget that focused on addressing pollution. Just before the 2019 elections, representatives of civil society organisations and political leaders of different parties came together to develop a common agenda.

“In the past few months, we have developed a People’s Progressive Agenda (PPA) for India in which a lot of stakeholders including political leaders from different parties participated. Environmental issues are an important part of that agenda and I can say that representatives of all political parties endorse it,” said Tikender Singh Panwar, a leader of the Communist Party of India (Marxist) and former deputy mayor of Shimla. The People’s Progressive Agenda is like a common minimum programme developed by a group of experts and political leaders from different parties.

“But whether environmental issues would become an issue on the basis of which people would vote is something that would depend on peoples’ participation,” Panwar told Mongabay-India. 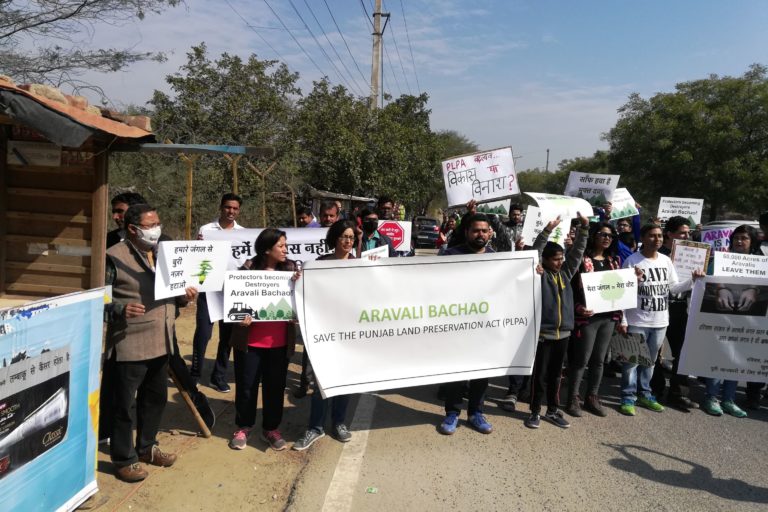 Residents of Gurugram recently started a campaign ‘No Aravallis No Vote’. Photo courtesy of Save Aravalli Campaign.

Chintan’s Bharati Chaturvedi also stressed that what is encouraging is that political parties are at least focusing on the environment as an important part in their manifestos which was not a case 10-15 years ago.

“In a recent conversation, a senior politician in Delhi told me that unlike farmers, environmentalists in urban areas are not scaring the political class enough or putting enough pressure on the political class,” said Chaturvedi.

She stated that the fact that terror of pollution and environmental collapse is being acknowledged by policymakers, means that there is an opportunity to discuss it in detail and seek strong action on it, with whichever government comes to power after May 2019.

Professor Jagdeep Chhokar, who is a founder member of the Association for Democratic Reforms (ADR), told Mongabay-India that, “in urban areas, there is a section of people who think about the environment but the tragedy is that the number of those people is very small.”

“They are from the upper strata of society, think and talk about the environment, but do precious little about it. They are big energy consumers themselves. There is a minuscule group who does something about environmental problems but they are very small in numbers and they are not able to make much of a difference,” said Chhokar.

“In Indian elections, the environment is not an issue which attracts a large number of people. If we look at Indian population as a whole, even in urban areas the proportion of people who think about the environment is very small and those who do something can be counted on fingers,” he added.