Will agriculture distress in Saurashtra benefit the opposition?

Updated : April 22, 2019 03:44 PM IST
Often criticised for rolling out the red carpet for industrial projects, the government in Gujarat is under fire from farmers and their organisations who believe the authorities have failed to address their problems.
In drought prone Saurashtra region of Gujarat, the farmers are battling issues like lack of water for irrigation, failure of crop insurance scheme and inability to get a right remuneration for their produce.
For nearly half of the year, farmers end up doing other jobs like that of a construction labour and truck driver to earn a living for their family.

Caught between the two mainstream parties, Bharatiya Janata Party (BJP) and the Indian National Congress, the farmers of Saurashtra are an angry lot this election season. They are waiting for answers to their woes, but there don’t seem to be any.

Mongabay-India travelled across several constituencies of the arid region in Gujarat, last week and found that water for irrigation, right price for their produce and timely payment of insurance remain consistent concerns among farmers through the area.

Saurashtra is an important agricultural region of Gujarat and it includes several parliamentary constituencies such as Surendranagar, Rajkot, Porbandar, Jamnagar, Junagadh, Amreli and Bhavnagar. Cotton, sorghum, groundnut and castor are primarily grown by farmers in the region. Rainfall in the region is low and erratic due to which it faces water scarcity, which becomes a critical problem for farmers.

All the 26 constituencies of Gujarat are scheduled to go for polls on April 23 in the third phase of the 2019 elections to Indian’s parliament, which is spread across seven phases from April 11 to May 19. Two-thirds of the state’s population is engaged in agricultural activities.

“Politicians fly to our villages during the elections, spend crores of rupees (tens of millions) on their rallies, make tall claims and vanish. Their grand claims do not translate into water for us. From the last three years, we have not got enough water for irrigation, even when it was available for industries,” Bharatbhai, 45, a farmer in Surendranagar constituency told Mongabay-India.

“It is so hard to secure even the insurance money that was promised to us,” said Bharatbhai as he resumed working in his field under the scorching sun.

The Saurashtra region is prone to water problems and is a routine witness to drought. Lack of water for irrigation is a key issue for voters, mainly farmers, in the Saurashtra region. Photo by Mayank Aggarwal/Mongabay.

“In the last three years, the water situation has worsened. Beyond the two-three months in the monsoon, there is absolutely no water for us to irrigate our crops. Even when there is a decent crop, we don’t get the right price for it, resulting in heavy losses. So, we either sit idle like this or do small jobs like that of a labourer to run our family,” said Haribhai Bharwad of Bhavnagar area, who was sitting with a group of farmers at a tea stall near the national highway.

“Our children are no longer interested in agriculture as they see no future in this. I don’t have any loan but there are so many farmers who have loans and some even committed suicide when they could not pay it back. What are we supposed to do? We don’t know anything else,” said Haribhai, who drives a truck for livelihood, when he is not farming.

Irrigation is a major issue of farmers

To quench the thirst of the parched land of Saurashtra region, the government of Gujarat had started the Saurashtra Narmada Avtaran Irrigation Yojana (SAUNI) scheme a few years ago. The scheme meant to divert excess overflowing flood water of Narmada to 115 reservoirs of 11 districts of Saurashtra through 1,126 km-long four link pipelines benefitting a total of 10,22,589 acres of land.

But farmers state that the scheme, so far, has been nothing but a failure, leaving them simmering with anger.

Veljibhai Patel, 65, of Lathi village in Amreli said these schemes are launched only to benefit contractors, not farmers.

“Farmers are no one’s priority. We are nothing but beggars for these politicians. The SAUNI scheme has not brought any water … the canals are empty just like the empty promises made by the government,” said Patel.

Travelling across the region, one could witness that the election fervour was mostly absent. There were only a few party flags and farmers expressed their anguish with politicians as they were either sitting on the roadsides or working in their fields in the sizzling heat with temperatures over 40 degrees Celsius.

Among scores of farmers that Mongabay-India spoke to while traveling across the constituencies of Saurashtra, there were several who appreciated the steps taken by the Prime Minister Narendra Modi led central government as well. Farmers want the government to ensure they get the right price for their produce. Photo by Mayank Aggarwal/Mongabay.

For instance, Kunwarjibhai, 63, who is a farmer in Surendranagar, said an important issue like agriculture needs time for it to be sorted out. “Modiji is working hard for farmers. We need to give him a little more time – at least five more years. People have a habit of complaining and they don’t appreciate the steps taken by him. The condition of groundwater is bad but he has ensured that we get Narmada water for irrigation,” said Kunwarjibhai, while admitting that water supply needs to further improve.

A recent report by the South Asia Network on Dams, Rivers and People had held that “Gujarat received a lot more water at Sardar Sarovar Project, which Gujarat claims is its biggest source of water, this year” but “while people and farmers are suffering, Gujarat government has not used this available water to satisfy the basic needs of people of Gujarat.”

Rural distress is a key political issue in elections

Stress in the agricultural sector had turned out to be a key issue in the assembly elections in Chhattisgarh, Rajasthan and Madhya Pradesh in December 2018. It had resulted in BJP-led state governments in the three states being voted out of power.

Congress is hoping to ride on the agriculture stress in the 2019 elections and wrest at least five to seven seats in Gujarat on the basis of this issue alone. In the 2014 parliamentary elections, the BJP had won all 26 seats of Gujarat.

“Our motto is simple – ‘save agriculture, save country’. Thus, we have promised a separate agricultural budget for farmers. We want to ensure that farmers no more die under the burden of loans. We will do everything to address the problem of water and ensure that it is used sustainably. Our focus is to ensure that farmers get their just share of water for irrigation rather than industries cornering it,” said Gujarat Congress leader Manish Doshi.

However, the BJP leaders sing a different tune.

The Gujarat BJP spokesperson Prashant Vala expressed confidence that they won’t face any problems in the agricultural belt of the state.

“The government has already distributed Rs. 2,600 crore (Rs 26 billion) to farmers as part of insurance. Besides, thousands of farmers have already got the installment of Rs. 2,000 promised to them by the central government,” said Vala.

Vala also told Mongabay-India that BJP-led Gujarat government has created an extensive network of canals in the Saurashtra region and started schemes like SAUNI to ensure that water is no more an issue for farmers.

“We won’t let go to waste even a single drop of Narmada river. Our plan is to develop 150 dams to divert its excess water to the parched areas … Already 55 such dams are made and they are completely filled with water,” said Vala while adding that water won’t be an issue for the farmers in the state. 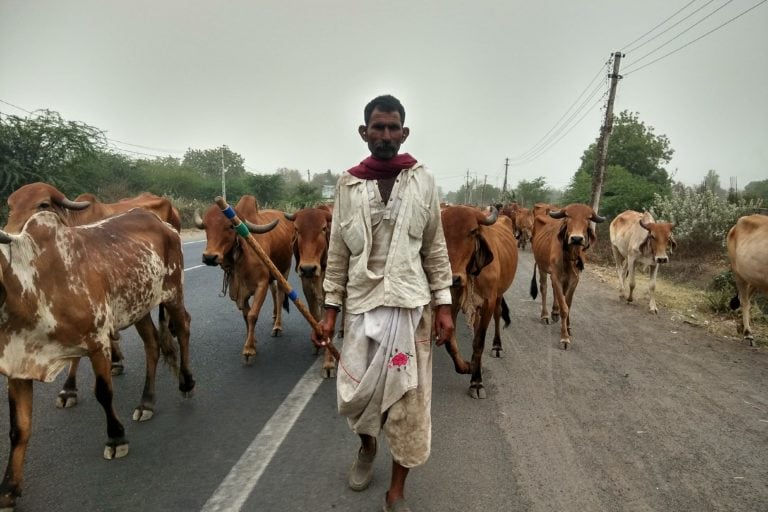 Farmers say they are forced to work as labourers and drivers due to problems in the agriculture sector. Photo by Mayank Aggarwal/Mongabay.

The farmer organisations in the state disagree.

Jayesh Patel, who is the president of the Gujarat Khedut Samaj (GKS), a group of several hundred thousand farmers of the state, said the main issues of farmers in Gujarat are acquisition of land for industrial and infrastructural projects, lack of water for irrigation, failure of crop insurance schemes and getting the right price for their produce.

“We want the government to follow the recommendations of the Swaminathan committee that said that farmers should get at least 50 percent more than their average cost of production for their produce. If that happens, most of their problems would be solved,” said Patel.

He also stressed that if the critical issue of water for irrigation is addressed in a systematic way then it will go a long way in increasing the income of farmers.