Updated : August 22, 2019 05:06 PM IST
A study of wild yak dung has shed light on climate-linked dietary preferences and habitats of the endangered species that is found only in the higher elevations of the Himalayas.
The recorded information also helps understand the extinction of megaherbivores such as woolly rhino and mammoth despite having diets very similar to the surviving yak which outlived them.
The flexibility in the dietary habits of the wild yak could be one of the reasons for their survival.

From the trekking and tour companies named after it to cheese and tee-shirts, the image of the culturally important shaggy yak is ubiquitous as one trundles through Himalayan villages. The dung of the wild yak (Bos mutus), ancestor of the economically important domestic yak (Bos grunniens), is of scientific value too.

Researchers have dug up clues in wild yak dung that could shed light on how the species outlived woolly mammoth and woolly rhino that went extinct about 9000 years ago.

They hypothesise in a study that dietary diversity in a changing climate may have shaped the yak’s survival in contrast to its colossal contemporaries-the woolly rhino and woolly mammoth. A group of wild yak. Photo by Sadhan Basumatary.

The study documenting the dietary preferences of the modern wild yak also offers insights for the conservation of the endangered species that is found only in the high Himalayas.

“We carried out the study on the dung of present-day wild yak, a temperate climate-loving megaherbivore, to understand their dietary and habitat preference concerning the current vegetation and climate. We were mindful of the fact that the present is the key to the past,” study author Sadhan K. Basumatary of Birbal Sahni Institute of Palaeosciences, Lucknow, told Mongabay-India.

It is the first attempt to tease apart pollen and plant remains in modern yak dung, the scientist said, adding the recorded information may deepen our understanding of the extinction of these megaherbivores despite having diets very similar to the surviving yak and bison.

Around 11,700 years ago, a transition from the Pleistocene to the Holocene epoch took place and regions around the world suffered unprecedented losses of megafauna species.

Pleistocene and Holocene are two epochs of earth’s most recent geologic era, the Quaternary period. In earth’s geologic history, the quaternary period began 2.6 million years ago, extending into the present.

A change in vegetation, the spread of modern humans (Homo sapiens), related effects of hunting and habitat change and climate change, have received broad support as the primary drivers of this extinction.

“The Quaternary period is a very critical period where maximum climatic changes have been observed. The pollen and non-pollen microfossils are the only proxies to understand the past vegetation and climate concerning the paleo-herbivory and paleodietary analysis,” said Basumatary.

“The findings reveal that the pollen assemblage recorded in the present yak dung study is very similar to the pollen cluster found in the dungs of the woolly mammoth and rhino that lived until 9000 to 10000 years ago. The last surviving woolly mammoths died out about 4000 years ago,” Basumatary explained.

“But the modern-day data can help reconstruct paleovegetation and climate in the region and can be correlated at a global level,” he said. 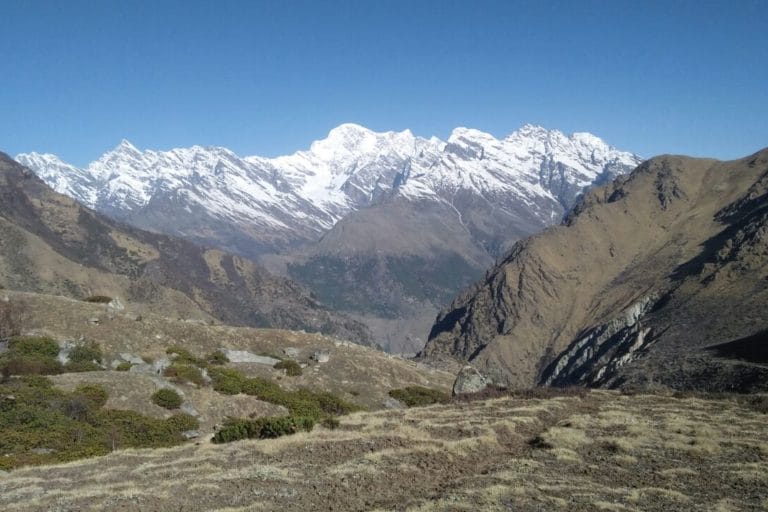 The vegetation in the study area. Photo by Sadhan Basumatary.

The study findings feed into generating baseline data on yak dung characteristics from different environments. “The generated data can provide us with the reasons for the megafaunal extinction, whether it is climatic or anthropogenic,” said Basumatary.

To source dung samples for their study, the researchers trekked up the alpine hills north from the Dronagiri village areas in Chamoli district of Uttarakhand in the western Himalayas during summer and winter of 2017.

In unpacking the yak’s diet, the researchers found the yak chows on a combination of both alpine meadow and steppe vegetation as the season changes.

“Grasses are the primary food of yak, but they also consume different kinds of non-grasses and some trees and shrubs depending on the availability and climate of the region,” said Basumatary.

Laboratory analysis revealed a higher diversity of pollen in summer samples, which means the yak likes a wide range of plants in that season and they migrate up to 50 kilometers in search of food. Pollen grains of plants of the genus Pinus, Cedrus, and Alnus which do not grow in this region, also showed up in the analysis.

Their presence could be due to the pollen grains drifting upwards with the warm wind rising from conifer forest zone in the lower altitudes.

The presence of diatoms (single-celled algae) in the dung is suggestive of the fact that yak has access to a seasonal perennial water source in the region. The dung samples also contained phytoliths (silica particles deposited in cells of plants).

Presence of grass phytoliths and other phytoliths reinforced the idea that plants other than grasses that were also important food plants of the yak.

“By studying pollen assemblages of wild yak, woolly mammoth and woolly rhinos, we can say they have the same food habits. But there are some minor differences in their food habits,” said Basumatary.

“For instance, arboreal (tree) elements are present in the wild yak dung samples which mean the animals migrated towards lower elevation and are acquainted with vegetation and climate in those altitudes,” said Basumatary. 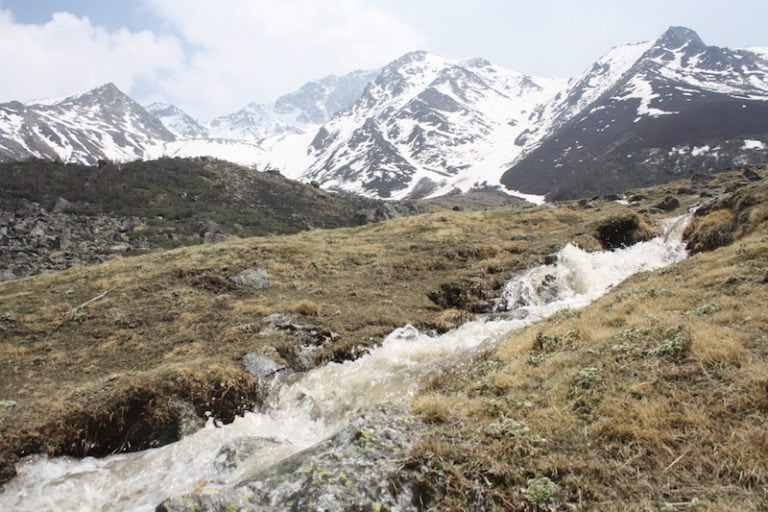 A view of the study area. Photo by Sadhan Basumatary.

According to paleobiologist Advait Jukar with the Smithsonian Institution’s National Museum of Natural History, the present study is useful for conservation in that it gives us a better understanding of the diet of the yak, and hence the kinds of habitats we should be conserving to ensure its continued survival.

However, Jukar, who was not associated with the study, said he thinks yaks likely survived in the high Himalayas because of the low densities of people there and/or reduced anthropogenic pressures and an abundance of the steppe-like vegetation they preferred.

“The only unique factor that we have been able to discern in the last ice age is the presence of humans. Yaks likely survived in the high Himalayas because of the low densities of people there and/or reduced anthropogenic pressures and an abundance of the steppe-like vegetation they preferred,” Jukar told Mongabay-India.