Updated : June 24, 2019 07:30 AM IST
The government focus on the need to improve water use efficiency by atleast 20 percent.
India extracts more ground water than the United States and China put together.

As the new NDA government gets sworn in, it is a good time to project how the water sector will be viewed in the new regime. One week before the election results came out, Prime Minister Narendra Modi announced in Madhya Pradesh: “I will focus my next term on ensuring clean drinking water.” This was manifested by the formation of the jumbo ministry of Jal Shakti. Earlier, multiple ministries worked on water-related issues – drinking water supply, water resources, urban development, environment, irrigation, inland waterways, shipping and hydroelectric power. A unified ministry should help significantly in having a holistic water management policy and in ensuring focused working. This is the first time in independent India that the government would be able to target water-related issues in such a clear and direct manner 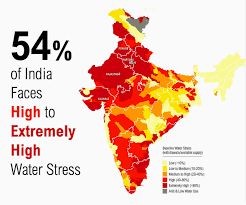 India is currently suffering from the worst water crisis in its history and millions of lives and livelihoods are under threat. Currently, 600 million Indians face high-to-extreme water stress and about two lakh people die every year due to inadequate access to safe water. The crisis is only going to get worse. By 2030, the country’s water demand is projected to be twice the available supply, implying severe water scarcity for hundreds of millions of people and an eventual 6 percent loss in the country’s GDP. As per the report of National Commission for Integrated Water Resource Development of Ministry of Water Resources, the water requirement by 2050 in high use scenario is likely to be a milder 1,180 billion cubic metres (BCM), whereas the present-day availability is 695 BCM. The total availability of water possible in country is still lower than this projected demand, at 1,137 BCM.

India extracts more ground water than the United States and China put together. The ground water table in India is falling more steeply than any other region in the world.

Forty percent of the population will not have access to drinking water by the year 2030. As much as 75 percent of the households do not have drinking water on premise and 84 percent rural households do not have piped water supply. Seventy percent of our water is contaminated. In the water quality index, India is currently ranked as 120th out of 122 countries. Twenty-one major cities including Delhi, Chennai, Bengaluru and Hyderabad will run out of groundwater by 2020, affecting 100 million people. These are alarming facts and we are running perilously closely to ‘Day Zero’ when we will run out of water. The BJP manifesto promises an ambitious goal of piped water supply to all homes by 2024 – ‘Nal se Jal’, as the catchy phrase proclaims.

The enormity and the complexity of the problem is not properly understood or appreciated by decision-makers. There is an acute lack of thought, planning and action. There is no accountability and the government is just waking up to the problem.

Well ahead of his time, Gandhiji wisely said, “There is enough water for everyone’s need, not enough for everyone’s greed.” That is the essence of the problem and the solution. There is still enough water available in totality. It needs to be managed better to ensure that it reaches the users efficiently. There are a set of supply-side solutions to augment the available water supply – leakage monitoring and reduction, rain water harvesting, sea water desalination and river interlinking. These are all essential, as availability of water goes down. But the more urgent and impactful interventions need to be on the demand-side of water management

Indian economy is one of the most water-inefficient in the world. Indian agriculture, industry and power utilities consume about 5 to 6 times as much water as their counterparts in the developed world. We take water for granted and do not attach any value to it. So we misuse, overuse and abuse water. Water auditing and metering is essential to better manage water and to improve water efficiency.

Wastewater Recycling is the big solution, as water is not a once-use resource. Sewage and industrial effluent can be treated, and the recycled water can be used for cooling towers, boilers, gardening, washing and just about any non-potable water requirement. Singapore has pioneered the concept of NeWater, where recycled water is bottled and sold for drinking by all citizens. The government needs to set stricter standards for recycling, and to incentivize recycled water through better pricing.

The new government is likely to be committed to the interlinking of rivers as a long-term concrete solution. The National Perspective Plan is envisaged to give the benefits of 25 million hectare of irrigation from surface waters and 10 million hectare by increased use of ground waters, raising the ultimate irrigation potential from 140 million hectare to 175 million hectare. It is also seen to lead to the generation of 34 million KW of power, apart from the incidental benefits of flood control and drought mitigation.

The Mihir Shah Committee calls for the creation of a National Water Commission, which subsumes the Central Water Commission and the Central Ground Water Board. This calls for a holistic, integrated approach to water management. It calls for a more participatory approach bringing multiple stakeholders into the fold. It also looks at a multidisciplinary approach that goes beyond engineering and hydrogeology. This could set a stronger regulatory framework and help to enforce stronger performance standards with government utilities. A key area of government focus is likely to be a need to improve water use efficiency by atleast 20 percent. Water conservation and recycling are likely to be focus areas. In 2018, Gujarat became the first state to come out with a Policy for Reuse of Treated Waste Water. Other states are likely to follow suit and aim for a specific objective to reuse atleast 25 percent of treated waste water by 2022 and to reuse 100 percent of the treated waste water by 2030. The pricing of treated wastewater shall be kept lower than the price of fresh water as notified by the government. The pricing would consider the recovery of capital and operation and maintenance costs for the treatment plant and the distribution network.

The government must facilitate an enabling environment, in which private sector involvement and investment can be supported. They must emphasise on setting standards and enforcing them strictly.

Water management is not an engineering problem or a technological challenge. This calls for raising awareness and to involve the local community, with carious stakeholders. Solutions cannot be built in a centralised manner. One needs decentralised, local solutions based on the ground situation, and involving the local stakeholders – civil society, industry, government, NGOs and everyone who is affected. Water is a localised subject and needs localised solutions as well. This will ensure on-the-ground accountability and speedy decision-making.

Water is too important a subject, to be left to the government or to experts.

India’s worst water crisis could also be its best opportunity to address fundamental issues and become more water efficient. Often, necessity is the mother of innovation. If we can take the current crisis in a positive sense, then we can create capability and solutions that can go a long way. India can take up leadership on issues like water recycling, rain water harvesting, leakage prevention and river interlinking, and set an example for other countries in the world.

If Swachh Bharat was Prime Minister Modi’s favourite initiative in his first term, Water is likely to dominate his agenda in his second term. All of us need to come together and tackle this challenge. Success is achievable and we have the capability in us. Our success in navigating through the water channels may well determine whether we have a ‘parched’ future or a water-filled scenario to look forward to.