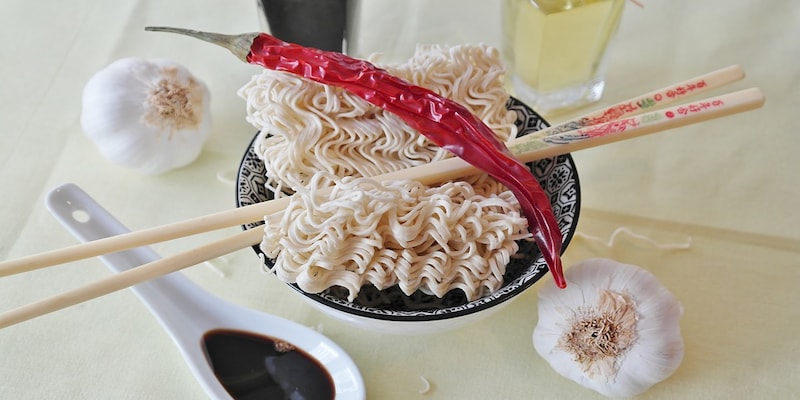 The first generation that got introduced to Maggi had no idea what Ramen was, what good noodles tasted like.

Everybody loves Maggi. Well almost, everybody. I personally am not a fan of the squiggly dish. In the “two minutes” of its shelf life, when it comes alive in a pan of boiling water, unfurling its chewy curls, you already know what it is going to taste like, how it will sit heavy in your stomach and you can think of different ways to "cook" it as it boils, because, surprise! it takes more than the advertised “two minutes” to cook. It takes almost ten.

However, with all my complaining, I am in the minority when it comes to the love this instant food garners. The fanatical devotion for the noodles, is mind boggling. How on earth, would such a plain noodle dish provide gastronomic pleasure to millions?
Maybe it was the timing, in the entertainment starved 1980s, Maggi noodles entered the market, like a genie sprouting from Aladdin’s lamp. Mothers across India were given an option for a stress free hot snack. “Bas do minute” was enough to give Maggi noodles, the top spot in Indian kitchens. It was tagged healthy, you saw the advertisement, a sprinkle of green peas and tomato bits made it nutritional. The hold this dish has on its followers is phenomenal. It became a vehicle for ingenuity, nostalgia, and profound epicurean pleasure for over three generations of Indians.
The first generation that got introduced to Maggi had no idea what Ramen was, what good noodles tasted like. The only other option you were served up with was Hakka noodles, a dish you ate when relatives from out of town showed up. The dish also translated to ‘Too much effort’. The second generation of Maggi devourers were the young students who had flown the nest.
The hunger pangs and empty wallets, naturally helped in reaching out to the affordable, and instantly ready cup of noodles. Akin to war stories, the swapping of Maggi stories “We cooked it on a pan, holding candles under the vessel” or “We mixed Maggi with chips and served it to our chief guest” . There was so much life lived with these noodles as a witness. Boyfriends found it easy to get that first kiss, after “cooking” for their new found female friends. Aaah Maggi, always garnished with nostalgia, after you are done sloughing off of the old plastic wrapping. Its biggest contribution as a cheap and transporting dish remained intact.
Then came the third generation. And like a good potboiler, this is when there was a twist. Maggi was suddenly found to be the villain. On June 5, 2015, the FSSAI asked Nestle to recall Maggi noodles, since some batches were found to contain high amounts of MSG and lead. The nation went into a tizzy, till the ban was lifted on August 13, the same year. The company came back with an advertising campaign, “Your Maggi is safe, has always been.” And it had a mother espousing how it was always safe. All this masala in one bowl of noodles, and it was devoured instantly. Today, the company has got back almost 60% of the market share in value terms, since the product was relaunched in November 2015. A huge feat. It had managed to secure its place once again, in the Indian kitchen.
But all this still doesn’t make me want to reach out for a bowl of Maggi. Despite the cruel play on how time-saving it is, I love the ads and admire the brand’s tenacity, but honestly without a spike of hot sauce, the soggy bite of the noodle dish is yet to transform into a food epiphany. Maybe the noodle labyrinth will have more to offer, in the next decade to convert us skeptics.
Sharon Fernandes is a journalist based in Delhi.
Check out our in-depth Market Coverage, Business News & get real-time Stock Market Updates on CNBC-TV18. Also, Watch our channels CNBC-TV18, CNBC Awaaz and CNBC Bajar Live on-the-go!