When smog travels from South Asia to the United States

Updated : September 17, 2019 04:33 PM IST
Ozone alerts in the United States advise people to skip car trips and against prolonged exposure to high levels of the lung-damaging greenhouse gas on specific days.
The role of foreign air pollutants, such as those that blow from southern Asia, in contributing to local pollution levels in the United States has stirred debates.
While ozone from other countries does impact the surface air of the USA, it is not the major contributor to ozone pollution events.

An electronic ozone alert flashes by, prompting us to “skip car trips” as we head for a hiking trip up in the Rocky Mountains National Park from Denver in Colorado in the western US, on a particularly hot Saturday in August.

As we drive through the freeway, Neil, our bus driver, points to the Colorado Department of Public Health and Environment’s electronic alerts that urge those sensitive to high ozone levels to avoid prolonged exposure between 2 p.m. and 8 p.m. on Saturday, August 24, 2019.

Ozone is the main component of smog and excessive ground-level ozone can worsen lung and heart disease, trigger asthma attacks and lead to early deaths. People most at risk from breathing air containing ozone include people with asthma, children, older adults, and people who are active outdoors, especially outdoor workers.

The ground-level or “bad” ozone is a colourless gas that forms when sunlight strikes various human-created pollutants. This ozone is different from the naturally occurring ozone in the upper atmosphere which blocks harmful ultraviolet radiation from the sun.

In Colorado, which for years has failed to meet the US government’s standards for ozone thresholds, Neil explains why people avoid pumping gas in the heat of the day. He says ozone “cooks” (forms) at high temperature (from precursors nitrogen oxides, carbon monoxide and volatile organic carbons) and the vapours from gasoline can contribute to its formation.

Neil is from Colorado’s capital Denver, which in March saw the return of its dreaded ‘brown cloud’, an unhealthy mix of ozone, smoke, and other particles from human activities: a stark reminder of the state’s dependence on cars and the impact of its oil and gas industry.

But even as Colorado works on ramping up controls in the oil and gas sector, the role of foreign pollutants — particularly from a rapidly-developing Asia — in disrupting local air quality standards, has been fueling debates.

Specifically, in the western part of US, there is a lot of debate whether we can blame upwind states and continents for the local pollution, notes Gabrielle Pfister of the National Center for Atmospheric Research (NCAR), which is now generating high-resolution, experimental, 48-hour forecasts of air pollutants across the contiguous United States.

Ozone is tricky not in relation to greenhouse gases (ozone itself actually is a greenhouse gas) but because ozone has a very complex chemistry, said Pfister.

“To form ozone you need emissions of nitrogen oxides (that come from cars, trucks, industry, power generation) and volatile organic compounds (emitted by industry, cars, trucks, plants). These get into the atmosphere and in the presence of sunlight react to form ozone,” she said.

The chemistry is very non-linear and it depends on the balance of nitrogen oxides and volatile organic compounds and having more of one or the other does not necessarily mean that you have more ozone. “When there is way too much nitrogen oxide you might actually destroy ozone,” Pfister said.

In 2004, NASA scientists announced that a giant, smoggy atmospheric “brown cloud” that forms over south Asia and the Indian Ocean has “an intercontinental reach and has effects around the world.” 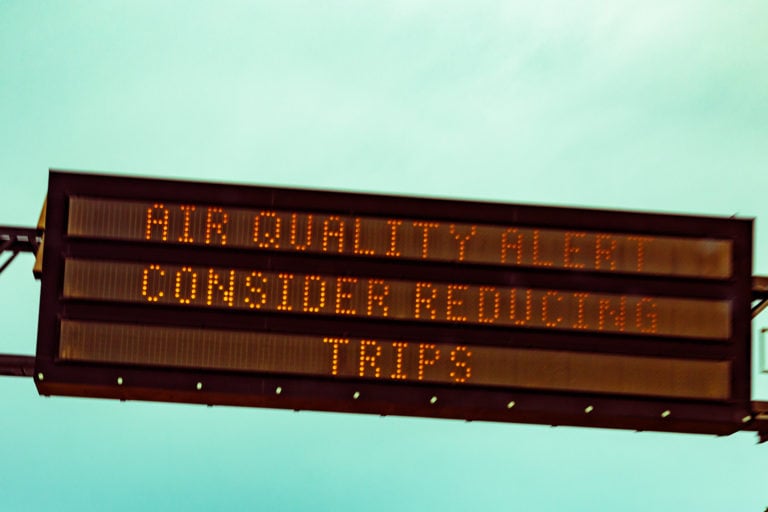 According to the University of Colorado, Boulder researcher Owen Cooper, most of the pollution is high above the surface and it never reaches the surface of North America. While ozone from other countries does impact the surface air in the US, it is not the major contributor to ozone pollution events.

Cooper explained that ozone from Asia drifts across the Pacific Ocean to North America all year long, but the pathway is fastest and most direct during March, April and May. This is the time when the jet stream is in a favourable position to loft pollution from the surface of Asia into the free troposphere and transport it to the western USA and Canada.

“The high elevation regions of North America, especially above the southwestern USA., are far more likely to be impacted by aged Asian pollution plumes than locations near sea level,” he said.

Take, for example, high-elevation western United States cities such as Denver that have seen stubbornly high ozone levels. National parks such as Yosemite, Joshua Tree and Yellowstone National Park, located at higher altitudes in the western United States, have reportedly seen a rise in ozone in the past 25 years due to smog blowing over from Asia. These areas are also closer to the atmospheric layers where smog travels from south Asia, according to media reports.

But the ozone transport pathway from south Asia to western North America is higher in the atmosphere than the route from East Asia, and therefore it has less impact at the surface of North America, clarified Cooper.

“The quantity of Asian ozone that impacts the surface of western North America varies greatly according to the amount of ozone in the pollution plume, the time of year, and the elevation of the receptor site in North America,” Cooper said.

Estimates of the impact of strong episodes of Asian pollution plumes on the western USA are in the range of 8-15 parts per billion by volume. These Asian ozone enhancements cannot be unambiguously measured by instruments, rather they are estimated by global chemical transport models which are constrained by observations, Cooper pointed out.

Model studies also indicate that ozone can be transported from Mexico and Canada into the U.S.A and their impact is variable due to shifting winds, but due to their close proximity to the U.S.A., pollution plumes from Canada and Mexico can contain higher levels of ozone than plumes from Asia, especially when considering regions of the U.S.A. that are close to the northern and southern borders, said Cooper.

However, when you factor in climate change, the scenario may change. Cooper spelt out two major impacts of climate change on ozone.

Heatwaves are expected to increase in the future due to climate change. Heat waves, which have light winds and lots of sunshine, are conducive for producing high levels of ozone. Therefore, on the regional scale, climate change will exacerbate local air pollution episodes, and we expect this phenomenon to occur in Asia, North America and Europe, said Cooper.

Secondly, a warmer climate means that the atmosphere will hold more water vapour. “Ozone can easily react with water vapour, and therefore higher levels of water vapour will mean that ozone will have a shorter lifetime,” he said.

Reducing greenhouse gas emissions from fossil fuel combustion, for example, according to the 2015 Paris Agreement, could also lead to a drop in ozone pollution. “Reducing domestic emissions would be much more effective at reducing ozone pollution events than reducing emissions in countries across the Pacific Ocean. Emissions reductions in the upwind countries could hypothetically be driven by domestic policies or by international agreements to limit intercontinental transport,” elaborated Cooper. We continue on our bus journey and our chat with Neil, as he elaborates that within his country’s borders, individuals will have to arm up against air pollution in their own ways.

As fossil fuels choke Denver, Neil says he has noticed people, especially youngsters, are catching on to public transport vehicles, such as the light rail system and the free electricity-powered MallRide buses, to reduce car trips.

“Earlier people used to care about air pollution because they were aware of the brown cloud which hung over the air in Denver but now they know it is ozone and are more cautious about the consequences,” Neil said.