homeeconomy NewsWhat is preventing the widespread adoption of biopesticides in India?

What is preventing the widespread adoption of biopesticides in India?

Biopesticides are yet to take off in a major way in India because of mixed constraints, despite their enormous market potential and the national and state initiatives to promote them as alternatives to chemical pesticides, according to a new review.

The Indian economy is predominantly agriculture-based, with about 70 percent of Indians engaged in activities linked to agriculture. The use of chemical pesticides and fertilisers increased tremendously after the Green Revolution in the 1970s. But now there is an increasing realisation of the risks posed by “rampant and continuous use of pesticides and fertilisers” to human health, ecosystems and their “catastrophic” effects on soil microorganisms, the review says.
Developing plant breeds that are tolerant to, or have better resistance to, pathogens is one eco-friendly alternative option, but it requires a long time to develop, test, license and commercialise new varieties.
This opens the way for using other cost-effective, eco-friendly and sustainable alternatives that would give better yield, such as the agriculturally important microbes (AIM) ‘rhizobacteria’ (bacteria that grow on plant roots in a mutually beneficial relationship in which these microbes enhance plant growth) and biopesticides that can control the outbreaks of pests.
“India still faces major challenges in developing its agricultural sector to enable the country to feed its growing population in the next 20–50 years,” says Chetan Keswani of the department of biochemistry at the Institute of Science, Banaras Hindu University, Varanasi, who is one of the authors of the review.
Several government agencies such as the Ministry of Agriculture and Farmers Welfare, Department of Biotechnology (DBT) and the Ministry of Science and Technology have been promoting research, development and commercialisation of biopesticides and biofertilisers. A page from the book “Natural history of the insects of India”, containing upwards of two hundred and twenty figures and descriptions. Photo courtesy Cornell University Library / Flickr.
There is global demand too. For example, the North American Free Trade Agreement (NAFTA) countries (the U.S.A., Canada, and Mexico) are the world’s major consumers of biopesticides and use up approximately 45 percent of all the globally sold biopesticides while the European Union uses 20 percent.
Globally, biopesticides amount to only 4.5 percent of the total pesticides produced, and in the U.S.A. it is 6 percent, whereas in India, it is only 3 percent, according to Subhash Chandra Santra, a professor in the Department of Environmental Science in Kalyani University, Kolkata. In India, the annual growth rate of biopesticides production is estimated to be 2.5 percent.
There are 970 biopesticides companies registered with India’s Central Insecticides Board and Registration Committee (CIBRC) which screens potential biopesticides for bio-safety. Despite tremendous efforts by Indian regulatory bodies to encourage the use of biopesticides, its slow permeation in agricultural applications remains a major challenge, the review says.
A disturbing trend
Meanwhile, in a disturbing trend, the rise in demand for biopesticides owing to national and state initiatives has ended up “stimulating the marketing of spurious biopesticides that are undermining the respectability of the biotechnology sector,” it says.
One of the constraints in India is the limited production of biopesticides with only 14 biopesticidal formulations being registered under the 1968 Insecticide Act, which primarily catalogues the criteria for determining pesticide bio-safety, the review says.
The cost of registration of biopesticides in India and the long-drawn-out process involved, further deter companies from engaging in research and development on biological pesticides.
Another limitation is the requirement to verify the microorganism for bio-safety before registration and propagation of biopesticides. Many universities and research institutions which conduct the initial research and develop biopesticides are unable to bear the additional costs required for extensive safety and allergy tests. For example, allergies to some fungi such as Trichoderma, Metarhizium, Anisophliae, Beauveria and Bassiana have been reported in immune-compromised patients; and sometimes strains safe for humans have been found to alter soil microbes, the review notes.
The need for an extensive battery of tests stifles commercialisation, confining several promising strains developed in India’s public-funded research institutions literally to the shelf.
A possible way forward, says the review, will be to use DNA bar-coding for accurate identification of the species to be used in biopesticide formulation prior to their development and field applications.
“India needs an integrated federal action plan, realistic funding and smooth administrative mechanisms for the registration and marketing of biopesticides,” said Keswani, “For harvesting maximum benefits, farmers should also be trained properly on how to use biopesticides,” he adds.
Ifs and buts
Biopesticide production is a high-risk venture requiring a high initial capital investment — right from the screening stage to selection of potential strains for sale, packaging, storage, and distribution. But the single biggest constraint to its development and growth is the rampant sale of sub-standard or spurious biopesticides, and biopesticides contaminated with chemical pesticides.
Adding to the problem of fake, contaminated or sub-standard biopesticides are the unregulated organic biological products not approved by the Central Insecticide Board and Registration Committee (CIBRC) and sold under the guise of organic bio-inputs certified by the Agricultural and Processed Food Products Export Development Authority (APEDA) under India’s Ministry of Commerce and Fertilisers. These ‘organic’ products are not subjected to any CIBRC-mandated bio-efficacy and bio-safety trials and account for an estimated 65 percent of the total volume of sales of biopesticides in the country.
Their low shelf life is also major concern for farmers. Biopesticides consist primarily of living microbes; temperature fluctuations, humidity and exposure to ultraviolet radiation dampen their efficacy. Moreover, any contamination severely reduces its effectiveness in field conditions.
Santra says biopesticides are more target-specific than chemical pesticides, affecting only target pests and their close relatives. In contrast, chemical pesticides often destroy friendly insects as well as birds and mammals. 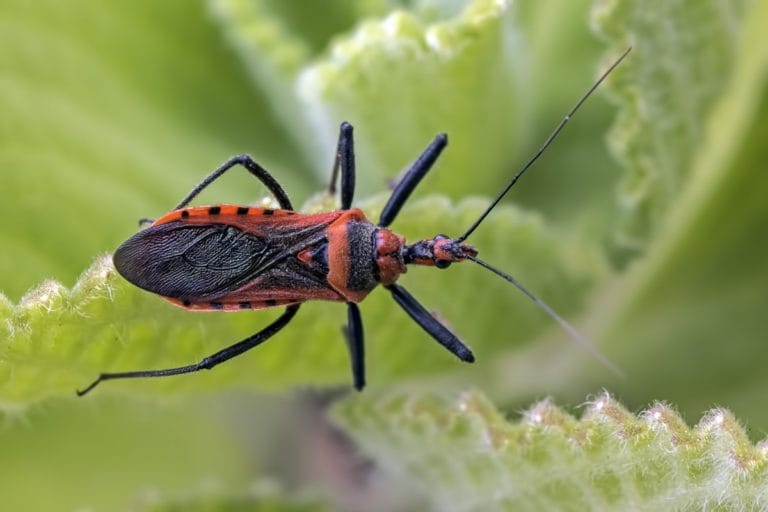 An assassin bug in Chennai. Photo from pxhere.
There are a lot of ‘ifs and buts’ when it comes using biopesticides widely, says Santra, who is a former member of DBT’s task force on biofertilisers and biopesticides. As they are target-specific they cannot be used against a wide range of pests, and that is a constraint.
Biopesticides are also highly dose-dependent and their effectiveness varies from climate to climate. Unlike synthetic pesticides that can be produced in desired purity and yield, it is often difficult to produce pure botanical pesticides due to the wide variations in the active and associated ingredients of the parent plants in different agro-climatic zones, says Santra. This leads to variations in their physical and chemical, as well as toxicological and other related properties. Their physical, chemical or microbial contamination also complicates matters.
More research and trials needed
“It would be unrealistic to expect biopesticides to completely replace chemical pesticides. They are one of the components of integrated pest management.” Santra said, adding that more research and trials on area-specific and crop-specific formulations are needed to maximise the use of biopesticides.
Microbial products cannot be commercialised the way other agri-inputs are commercialised, points out Rajeswari Raina, a professor in the School of Humanities and Social Sciences, Shiv Nadar University, Gurgaon.
“Being live products that are subject to high variability and diversity, they cannot be standardised across the country,” she says. “There is a need for research and production units at the local level to supply to each region/crop/crop-livestock system.”
“Secondly, no good scientist will advise that these products be applied directly or along with inorganic fertilisers. The microbial product is applied along with organic matter like farm yard manure or compost.”
Compounding the problem is the fact that mechanisation of agriculture has reduced or removed cattle in many areas, reducing the scope for biomass application in general.
Raina, a former scientist with the National Institute for Science, Technology and Development Studies (NISTADS), New Delhi, too emphasised that the ‘one-size-fits-all’ approach cannot be applied to biopesticides or biofertilisers. Biopesticides “need local data and intelligence, understanding of pest incidence patterns, etc., as well as non-pesticidal practices such as a bonfire during the egg laying season of the pest, or two rows of a trap crop.”
“The biggest problem is with the centralised consolidated agricultural research system which could not, and still cannot, cater to any location-specific problems,” says Raina. It is “very easy to do validation trials for chemical products which can be applied across the board in any season and crop. This is not the case with biopesticides where you cannot produce a standard product for all the districts even in one state,” Raina adds.
According to her, more than 90 percent of the biofertilisers, and perhaps almost all of the biopesticides marketed in the country are used in the four southern states in India. North Indian states, especially the Green Revolution states, have no base organic material to apply the microbial cultures into their soil. And even in southern states, the changing rules of the departments of agriculture have caused a decline in the use of biopesticides, says Raina who in 2014-15 talked to farmers in Coorg and Hassan districts in Karnataka about using biopesticide.
The farmers apparently told her that earlier the state department for agriculture used to supply Trichoderma cultures for being used in coffee and such other plantations. But once the department stopped doing this, they were forced to buy substandard or fake products from private companies.
There is massive potential for marketing biopesticides in India, says Raina. “But it needs a re-organisation of agricultural research and information systems, strengthened with local data and local pest scouts to succeed.”
(This story was first published on Mongabay)
Check out our in-depth Market Coverage, Business News & get real-time Stock Market Updates on CNBC-TV18. Also, Watch our channels CNBC-TV18, CNBC Awaaz and CNBC Bajar Live on-the-go!