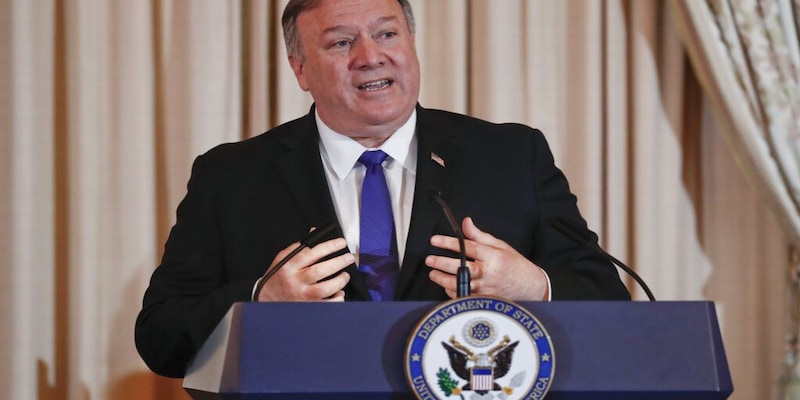 The United States has slammed China for its move to impose a controversial national security law in Hong Kong, with Secretary of State Mike Pompeo saying it's a "sad day" for the people of the territory and warning Beijing of new countermeasures.

Chinese President Xi Jinping on Tuesday signed a controversial security law that gave Beijing new powers over Hong Kong that are tailor-made to crackdown against dissent, criminalising sedition and effectively curtailing protests, amidst global anger and outrage in the former British colony.
In a strongly worded statement on Tuesday night, Pompeo said, "The Chinese Communist Party's (CCP) decision to impose draconian national security legislation on Hong Kong destroys the territory's autonomy and one of China's greatest achievements."
"Hong Kong demonstrated to the world what free Chinese people could achieve one of the most successful economies and vibrant societies in the world," he said.
But Beijing's "paranoia and fear" of its own people's aspirations have led it to eviscerate the very foundation of the territory's success, turning 'One Country, Two Systems' into 'One Country, One System', the US Secretary of State said. "Today marks a sad day for Hong Kong, and for freedom-loving people across China."
Civil liberties, including the right to protest, freedom of speech and the independence of the judiciary, were enshrined in Hong Kong's mini-constitution called 'Basic Law', which came into effect with the end of British control in 1997.
The 50-year agreement, in effect, offers Hong Kong a "one country, two systems" principle, guaranteeing it the rights and freedoms that do not exist in mainland China.
Pompeo said the United States will continue to stand with the freedom-loving people of Hong Kong and respond to Beijing's attacks on freedoms of speech, the press, and assembly, as well as the rule of law, all of which have, until now, allowed the territory to flourish.
He rued that the CCP's action demonstrates once again that Beijing's commitments in this case the 1984 Sino-British Joint Declaration and the Basic Law  were "empty words".
The Chinese Communist Party promised 50 years of freedom to the Hong Kong people, and gave them only 23. Within the past few years, Beijing has also violated its agreements with the World Health Organization, the World Trade Organization, and the United Nations, Pompeo said.
"This is a pattern the world cannot ignore," he said, adding that the United States will not stand idly by while China "swallows Hong Kong into its authoritarian maw".
"Last week, we imposed visa restrictions on CCP officials responsible for undermining Hong Kong's autonomy. We are ending defense and dual-use technology exports to the territory. As per President (Donald) Trump's instruction, we will eliminate policy exemptions that give Hong Kong different and special treatment, with few exceptions," he said.
In a related action, the United States on Tuesday suspended any License Exceptions for exports and re-exports to Hong Kong, and transfers within the territory of items subject to the Export Administration Regulations that provide differential treatment than those available to China.
A day earlier, the Commerce Department regulations affording preferential treatment to Hong Kong over China, including the availability of export license exceptions, were suspended.
"Further actions to eliminate differential treatment are also being evaluated. We urge Beijing to immediately reverse course and fulfil the promises it has made to the people of Hong Kong and the world," Commerce Secretary Wilbur Ross said.
Congressman John Curtis, a member of the House Foreign Affairs Committee, led a bipartisan coalition to introduce the Hong Kong Safe Harbor Act, which would designate the people of Hong Kong as Priority 2 refugees, streamlining their admission process to the US and opening up an asylum route for frontline activists in immediate danger.
The Senate companion bill is led by Senators Marco Rubio, Bob Menendez, Todd Young and Ben Cardin. The world witnessed the courage of Hong Kong's pro-democracy activists, who last year took to the streets to defend their autonomy from China's authoritarian grip, Rubio said.
"Following last night's implementation of Beijing's National Security Law, the US must help the people of Hong Kong preserve their society at home and find refuge for those who face persecution for exercising the rights once guaranteed under the Joint Declaration.
"Through the Hong Kong Safe Harbor Act, our nation would offer a safe-haven to many Hong Kongers who have tirelessly fought against tyranny," he said.
Check out our in-depth Market Coverage, Business News & get real-time Stock Market Updates on CNBC-TV18. Also, Watch our channels CNBC-TV18, CNBC Awaaz and CNBC Bajar Live on-the-go!