The US Fed has hiked its key interest rate by 75 bps and economists believe that it is behind the curve and that more is in store.

The US Federal Reserve approved a 75-bps hike in the policy rate to a range of 1.5-1.75 percent — its largest interest rate increase in more than a quarter of a century — to stem a surge in inflation. US central bank officials acknowledged the jump in consumer prices may be eroding public trust in their power, and being driven by events seen increasingly out of their hands.

Fed Chair Jerome Powell said the central bank is not trying to induce a recession, as it cut growth projections for the world's largest economy staring at rising unemployment ahead.
In an interview with CNBC-TV18, Sameer Goel, Global Head of Emerging Markets Research at Deutsche Bank spoke at length about what this means for India and other emerging markets. 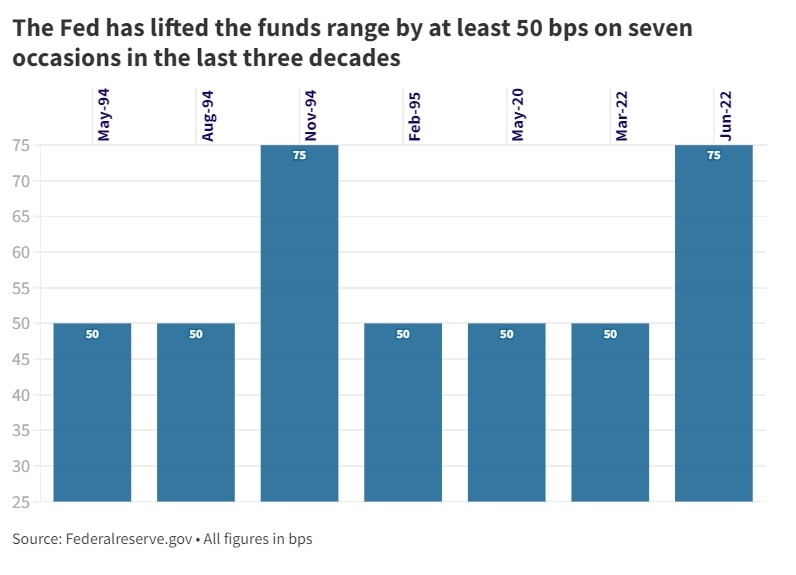 “Our read of the Fed yesterday, June 15, was very much that they will probably end up needing to tighten more aggressively than what maybe they are suggesting. We still think the next inflation print is going to be relatively elevated, which means a 75 basis points hike likely in July, probably followed by 50 each in the following couple of meetings,” he said.
Explained: What Fed’s biggest rate hike since 1994 means for you
Where will this leave the RBI? Goel foresees peak rates in India in the range of 6.5 percent.
“The peak rates in India are probably in the region of about 6.5 percent with a risks more towards 7 percent. Has that change with the Fed pace of tightening? I think maybe the timing of it gets influenced in terms of both front loading. I don't think it necessarily changes where we think the terminal rates would get to,” said Goel.
Also Read: US Fed hikes interest rate by 75 bps to 1.75%, the biggest increase in 28 years
Rupal Bhansali, CIO-International & Global Equities, Ariel Investments too feels that Fed’s move is an acknowledgement of being behind the curve.
“Frankly, the Fed is so behind the curve, I think today's move is more an acknowledgement of them being behind the curve, rather than us trying to interpret that they are now finally getting it. I think we have a far way to go. And in fact, Powell (Chair, Federal Reserve, USA) acknowledges that” he said.
For the entire interview, watch the accompanying video
(Edited by : Abhishek Jha)
Check out our in-depth Market Coverage, Business News & get real-time Stock Market Updates on CNBC-TV18. Also, Watch our channels CNBC-TV18, CNBC Awaaz and CNBC Bajar Live on-the-go!
Tags