Follow real-time updates on Union Budget 2023Catch exclusive videos on Union Budget 2023 from CNBC-TV18
In Italy’s ancient port city of Genoa, a laboratory table at Istituto Italiano di Tecnologia (IIT) laden with green, brown and orange heaps of powder may remind one of Holi, India’s festival of colours. But this is a scene of cutting-edge research on crafting biodegradable plastics out of agro-waste, a component whose poor management in India is a root cause of air pollution.

These powders, derived from fruit and vegetable waste, are the raw materials for bioplastics fabricated by the researchers at IIT Genoa’s Smart Materials lab part of the team composed by Giovanni Perotto, Ilker Bayer and Athanassia Athanassiou.
Bioplastics are derived from renewable, plant-based sources such as vegetable plants and oils, wood chips, etc., and are a potential alternative to fossil-fuel derived plastics.
At IIT Genoa, researchers transform these powders to bioplastics of varying flexibility and mechanical strength using an eco-friendly water-based method.
So while bright green powdered parsley and spinach stems became soft and stretchable plastic films, rice husks yielded more robust and less flexible version of bioplastics.
“Our main approach is to use waste material from agriculture such as fruit and vegetable peels, inedible parts of fruits and vegetables and unsold fruit and vegetables. We have established a strong collaboration with the central vegetable market of Genoa, as well as with other producers,” said Despina Fragouli, team leader at the Smart Materials lab. 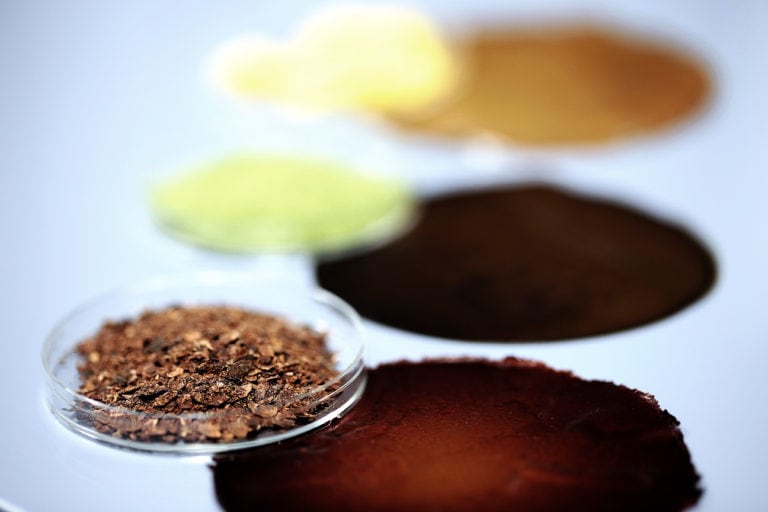 These powders, derived from fruit and vegetable waste, are the raw materials for bioplastics fabricated by the researchers at IIT Genoa’s Smart Materials. Photo by IIT-Istituto Italiano di Tecnologia.
“We developed a technology for the direct transformation of inedible agro waste into bioplastics,” Fragouli said.
Fragouli discussed the research on eco-friendly smart materials with a visiting delegation of science journalists, including this Mongabay-India correspondent, during a field trip organised alongside the World Conference of Science Journalists, 2019 in July.
The technology developed by IIT, Genoa breathes new life into cellulose-rich vegetable and fruit waste and aligns with the idea of a circular economy where a strategy of reduction, reuse and recycling of elements drives resource utilisation.
From powder to plastic
These bioplastics, which are being promoted as biodegradable and environmentally friendly, can be produced in two ways, including a water-based process.
“In the first one, we blend the agro-waste powders with variable amounts of biopolymeric material and then we make objects by processes widely applied in the industry such as melt extrusion, injection moulding or by mould casting,” Fragouli told Mongabay-India in a follow-up email.
“The amount of agro-waste component can reach 70-80 percent by weight in the biocomposites. So in the final composite, a very small amount of polymer is actually acting as a glue to keep the powder particles together,” Fragouli said.
In the second method, the waste powders are simply mixed with specific solvents or water of defined pH without the addition of any other components.
“The solvent ‘attacks’ and destroys the crystallinity of the cellulose components of the wastes, resulting in homogeneous solutions, and after casting and solvent evaporation, homogeneous plastic films are formed,” Fragouli said.
It can take from a few minutes to a few hours to arrive at the final product.
Depending on the plant species, biopolymers display diverse mechanical properties ranging from brittleness and rigidity (such as rice husk polymers) to softness and stretchability (parsley stems).
Because of the mild conditions of the fabrication process, the colour of the starting vegetables stay preserved in the bioplastics, the researcher explained. Functional properties of the source material, like antioxidant capabilities and even odour are retained.
Upon cradling the circular patches of bioplastics, one notices a delicate fragrance, reminiscent of their source: a slightly peppery note of turmeric in one film and a toasty whiff of coffee off a brown coloured bioplastic.
Once produced, the bioplastics can be broken down into non-toxic byproducts.
“Plastics biodegrade at highly variable rates that span from few months to few years. The bioplastics break down into low-weight and non-toxic byproducts. We have proved that our biocomposites are biodegradable either in landfills or even in home composting conditions or even in the sea. The production is not energy-intensive and they are not costly,” said Fragouli.
The time needed for biodegradation depends on the temperature and humidity of the environment and the properties of the plastic component added Fragouli. For instance, crystalline plastics require more time compared to amorphous plastics. 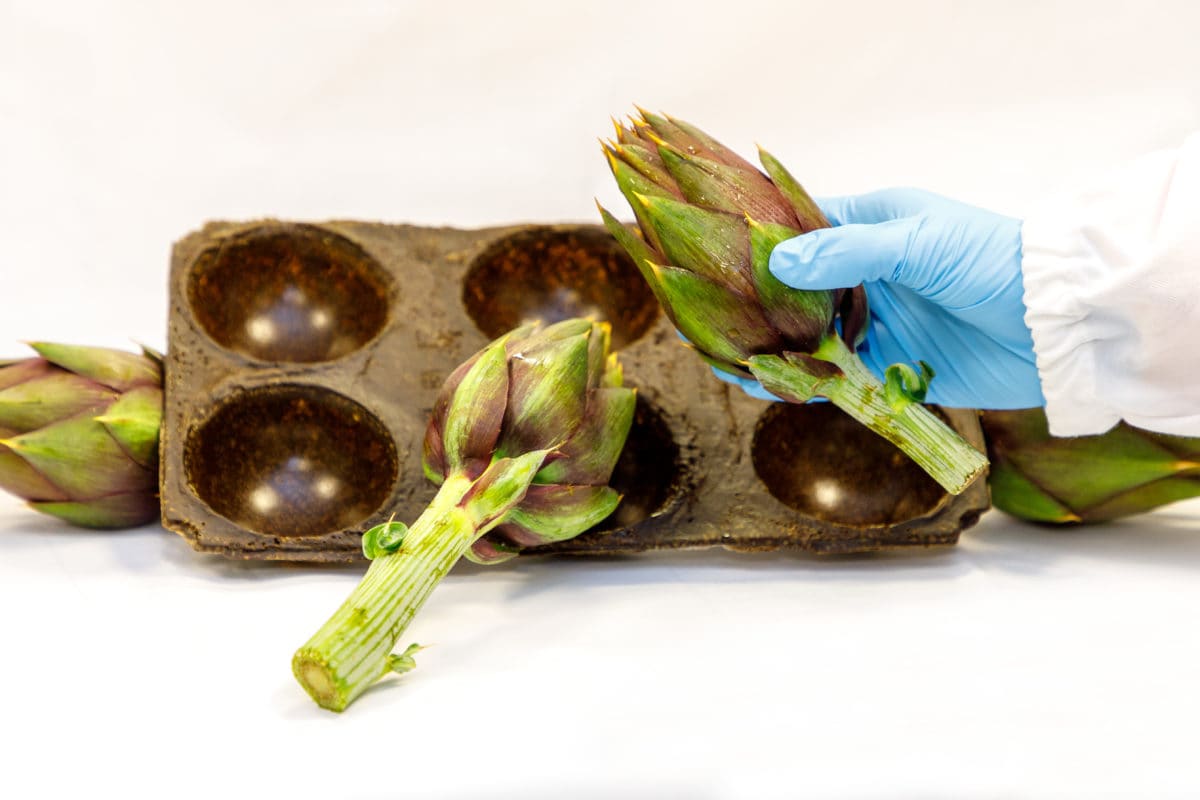 Biodegradable packaging from artichokes. Photo by IIT-Istituto Italiano di Tecnologia.
Can bioplastics help in the management of crop waste?
Indian polymer scientist Vimal Katiyar sees an opportunity in using agricultural wastes (biomass) for designing a diversified range of bioplastics. He says it could boost management of crop waste.
“One way to look at the crop burning issue in India is to use these wastes for bioplastics and biofuels,” suggested Katiyar, the coordinator for Centre of Excellence for Sustainable Polymers at India’s Indian Institute of Technology, Guwahati.
“This could also tie in with the biorefinery idea which means transforming biomass to energy and other beneficial byproducts including bioplastics and biofuels,” said Katiyar.
India’s Ministry of New and Renewable Energy (MNRE) estimates say that about 500 million tons of agricultural and agro-industrial residues are generated annually in the country. And nearly seventy percent of these residues are used as fodder, as fuel for domestic and industrial sectors and other economic purposes.
However, in the absence of adequate, sustainable management practices, around 92 metric tons of crop waste (biomass) is burned every year in India, causing air pollution.
In India, action on beating plastic pollution has been at the centre of attention of the central and several state governments. But results have varied across states.
Effective solution or an attempt at greenwashing?
Though bioplastics are considered as a sustainable solution due to the low emission of greenhouse gasses during production, they are far from the silver bullet to the plastic pile-up problem. For one, bioplastics can be more energy-intensive during manufacture than their conventional competitors.
Further, there is scepticism regarding their biodegradability: are they just as harmful as conventional plastics. Bioplastics can also be relatively expensive to produce than their conventional counterparts.
But Katiyar reasons that the investment in bioplastics is worth the money and time since they biodegrade faster whereas conventional plastics break down in 400 years. “Prices will also go down due to the extensive research on production processes happening across the world,” he said.
Currently, bioplastics represent about one percent of the about 320 million tons of plastic produced annually. But with rising demand and with more sophisticated materials, applications and products emerging, the market is already growing each year.
Katiyar acknowledged the three most pressing challenges globally in the widespread adoption of bioplastics.
“While biodegradability is an advantage, we need to get them to break down in open environments in a safe manner. Usually, some of the successful plastics of this class need appropriate infrastructure such as high temperature composting facilities to degrade. Secondly, they are not heat stable. And bioplastics for food packaging must be able to provide a barrier to oxygen permeation, so the food doesn’t spoil. The commercially available biodegradable plastics do not adequately fulfill this criterion,” Katiyar explained.
The researcher and his colleagues have taken on these challenges head-on. The growing repertoire of biodegradable products from their lab comprises of items ranging from cutlery, household furniture to a variety of biopolymers (such as polylactic acid) from feedstock such as cassava waste and sugarcane juice.
At present, Katiyar and his team are working on a process that makes bioplastics that can easily breakdown in the soil.
“Our products have also passed the hot beverage test and can be used to store hot drinks, unlike most bioplastic items. Production costs may also lower when compared to the other biodegradable plastic producers in the world once produced in industrial scale. So far, we have been producing few kilograms of biodegradable plastic at one time but we are now experimenting with a tonnes per year capacity pilot plant,” he added. 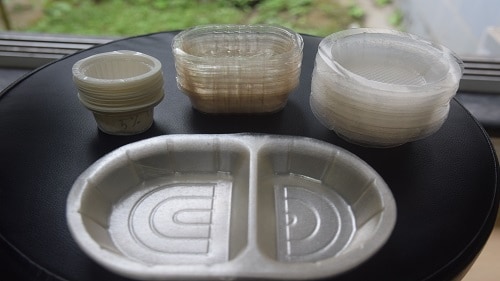 While biodegradability is an advantage, we need to get them to break down in open environments in a safe manner, according to Vimal Katiyar of IIT-Guwahati. Photo from Centre of Excellence for Sustainable Polymers.
(This story was first published on Mongabay)
Check out our in-depth Market Coverage, Business News & get real-time Stock Market Updates on CNBC-TV18. Also, Watch our channels CNBC-TV18, CNBC Awaaz and CNBC Bajar Live on-the-go!