To find out monkey fever’s next destination, scientists follow the ticks that carry it

Updated : July 01, 2019 04:30 PM IST
Monkey fever or the Kyasanur forest disease (KFD), is a tick borne viral disease that has spread from wild to people living at the periphery of forests across the Western Ghats.
Over 9000 people have been affected by the disease; several have died. KFD has no cure and only a weak vaccine.
Scientists are now trying to understand if monitoring an area for ticks that transmit the KFD virus can help create risk maps for areas that can help health officials take preventive measures.

Since it was first detected in a small village in the Karnataka Western Ghats in 1957, the Kyasanur Forest Disease (KFD) or monkey fever has affected over 9000 people across five states in the Western Ghats region. The lack of a cure, an ineffective vaccine and a recent surge in outbreaks has spurred researchers to look for ways of mapping areas at a high risk of outbreaks.

In one such attempt, researchers from the Manipal Centre for Virus Research have studied the spatial distribution of ticks, the transporters of the KFD virus, across the Western Ghats, to see if this was an effective way of creating risk maps for the disease.

The KFD virus belongs to the Flaviviridae family of viruses, whose other notable members include the dengue and yellow fever virus. While the latter viruses are carried and transmitted by mosquitos, the KFD virus is transported by ticks. Ticks are tiny parasitic animals that latch onto the bodies of animals and feed on their blood and while doing so, can transmit viruses into the bloodstream of the hosts. Ticks from the Haemaphysalis group, especially the species Haemaphysalis spinigera, are believed to be the most common vectors of the virus.

The KFD virus has long been circulating in the wild, infecting small mammals like the jungle striped squirrel, the common house shrew and several bat species but in primates particularly the bonnet macaque and common langur the disease seems to be especially debilitating often fatal. Indeed, it was a spate of monkey deaths in the Shimoga district that first drew attention to the disease and lead to the name monkey fever.

From animals to humans through ticks

In humans, the disease comes with a range of symptoms including headaches, muscular pain and internal bleeding. Some studies assessed that 3-10 % of the cases resulted in death, while others reported mortality rates as high as 20%. Over time, the disease was detected in other districts in the Karnataka Western Ghats including Uttara Kannada, Dakshina Kannada, Udupi and Chikmagalur but it remained understudied.

“Since it was a disease of a few districts in one state, it never received much attention,” said G. Arunkumar, the director of the Manipal Institute of Virology (MIV) (which is the new name for Manipal Centre for Virus Research). “Not many studies were done except in the late 1950s and 1960s,” he added. 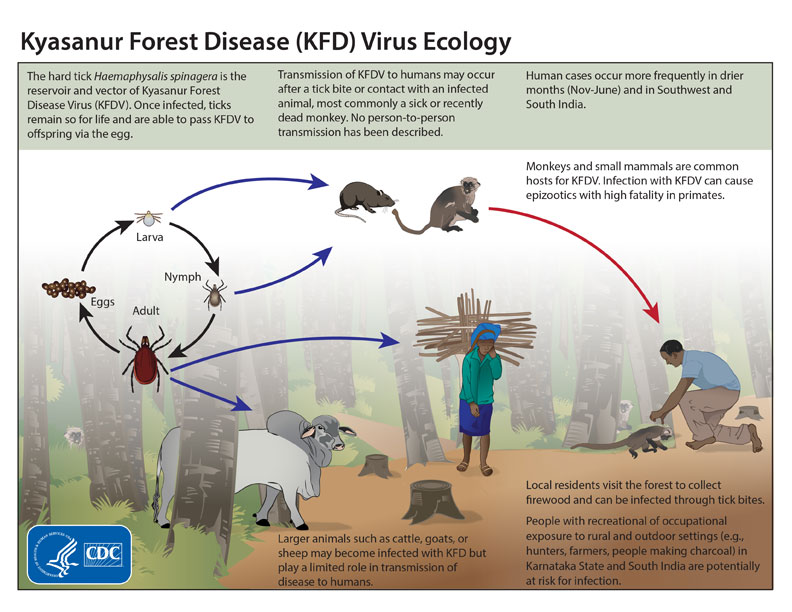 Graphic shows how the KFD virus can spread to animals and humans. Over 9000 people living in the periphery of the Western Ghats have been affected by the disease. Infographic courtesy Centre for Disease Control, USA.

In 2013, as part of the Global Health Security Agenda, MIV in collaboration with the Centers for Diseases Control and Prevention in the US and state hospitals across India began a four-year project called Acute Febrile Illness (AFI) surveillance project. Under the AFI project, researchers collected clinical samples of patients from hospitals in ten states and made a startling discovery.

“We found that the virus of this disease [KFD] existed in five different states,” said Arunkumar. Apart from Karnataka, Kerala, Tamil Nadu, Maharashtra and Goa also had cases of KFD.

While all the newly afflicted states also lay in the Western Ghats, within Karnataka the disease was being detected even in drier districts away from the mountain range, causing concern that the virus could spread far from its origins.

Moreover, the brunt of the illness and its cost was being borne by poor farm workers and forest dwellers who worked in farms close to forests or ventured inside to collect forest produce. Entire local economies were also reported to be affected. In Shimoga district, repeated outbreaks were keeping tourists away, affecting the local economy, according to the newspaper Deccan Herald.

KFD outbreaks were also difficult to predict. “If you look at KFD in humans, the problem is that a village may be affected one year, and next year the outbreak will occur in a totally different place. So, for any kind of effective control or effective vaccination campaign, etc., , we need some other markers,” explained Arunkumar “We have tried to see if tick surveillance could be that marker.”

Using the AFI data, the researchers zeroed in on five affected taluks in five states – Thirthahalli in Shimoga district in Karnataka, Sattari in North Goa district in Northern Western Ghats, Dodamarg in Sindhudurg district of Maharashtra in the Konkan region, Sultan-Bathery in the Wayanad district in Kerala and Gudalur in the Nilgiri district in Tamilnadu.

KFD is a seasonal disease, with peak outbreaks occurring between December and May in the dry season when tick numbers are also at its highest. Since the objective was to find a method of assessing risk before the outbreak season started, Arunkumar and his colleagues decided to study tick populations a little before the peak season.

From October 2017 to January 2018, field researchers collected a little over 8000 ticks from a subset of sites in all five taluks. Fieldwork was done in villages, plantations and sites close to forest boundaries, places where humans could be bitten by ticks. A field researcher from the Manipal Institute of Virology sweeps the forest floor for ticks as part of their disease surveillance efforts. Photo courtesy G. Arunkumar.

Fourteen different species of Haemaphysalis ticks were found in their collection. Haemaphysalis spinigera, the primary KFD vector, was dominant in the Thirthahalli in Shimoga district (the place where it all began), in Sattari in North Goa, and in Dodamarg in the Sindhudurg district.

The mere presence of ticks, even those that are known vectors of the disease, is not enough to decide if the area is at risk. The researchers looked for signs of the KFD virus in the ticks they collected, hoping that this data coupled with the abundance of ticks would help them develop a formula for calculating the risk of infection in each of the five taluks. But none of the ticks they had collected had any infection.

The authors noted in the study that the KFD virus infected only a small proportion of the ticks present in a region. “Every Haemaphysalis tick is not infected with KFD virus,” Arunkumar said. “In fact, KFD infected areas may be more like islands. Small areas where infected ticks are concentrated,” he added.

Without the necessary complementary information for tick infection, the authors attempted to look for another piece of correlating evidence. In each of the five taluks, they compared tick abundance to the number of active KFD cases.

Did areas with the highest tick abundance also have the highest number of KFD cases in that year? If yes, perhaps tick numbers could be used to identify high-risk areas.

Using the AFI data, the researchers found 205 cases of KFD among humans in the five taluks during the study period of 2017-2018. Over 60% of these cases were reported from Sattari and Dodamarg, taluks where the Haemaphysalis spinigera dominated. This result, according to the researchers, lent credence to the argument that areas were the vector tick species were present in high numbers were at higher risk of having KFD outbreaks.

However, in Thirthahalli in Shimoga district, the ground zero of the KFD outbreak had the most Haemaphysalis spinigera ticks, but fewer cases of KFD. Arunkumar speculated that continued exposure to the disease and vaccines might have made this population more immune to KFD. In Goa and Maharashtra, areas that KFD had newly broken into, the presence of ticks may mean higher chances of disease.

What does this mean for the future of disease surveillance and risk mapping?

“Continuous monitoring of tick populations will definitely help authorities to identify risk areas,” said Arunkumar. “This will vary from year to year. So, it will have to be done every year, a few weeks after the rainy season, maybe from October. If surveillance is done for multiple locations, we can map tick densities and make some sort of an initial prediction about which are the high-risk areas where outbreak can occur.”

But the researcher is clear that this prediction would not be a hundred percent accurate. “Density [of ticks] is one major factor, but there are other factors,” Arunkumar added.

S.L. Hoti, director-in-charge of the National Institute of Traditional Medicine in Belagavi, Karnataka, seemed to hold a similar view. “Tick surveillance may be important. Especially if you find ticks with infection, that is useful information,” said Hoti, who is not part of the current study. “Apart from ticks, it is important to study the reservoirs, the small rodents and human behaviour also,” he added.

“Unlike diseases like malaria, where the vector, the mosquito, goes to humans, in KFD humans go to the disease,” said Arunkumar. Indeed, reports showed that KFD mostly affected human beings who frequented forests and forest edges, such as forest guards patrolling wildlife reserves, cashew plantation workers working in farms close to forest edges and people venturing into forests to collect produce. “So, any risk map will have to factor in what human beings are doing in these situations,” explained Arunkumar. People working in plantations at the edge of forests in the Western Ghats seem most likely to be infected. Photo by Rajaram Rao K/Wikimedia Commons.

“Risk maps will also only be useful if vaccinations are strengthened,” added Hoti. The KFD vaccination was first introduced in 1990, but studies have reported that the coverage has been inadequate. “Even where vaccinations are given, patients are given one dose but not the second dose,” Hoti pointed out. This is a matter of concern because a 2014 CDC report suggests that the first dose of the vaccine is effective in only 4% of the vaccinated patients while a second dose is effective in 69% of the cases. “So apart from risk maps, we need to work on this aspect as well.”

Overall the resurgence and spread of the disease seem to be spurring researchers. Hoti himself is the Indian principal investigator of Monkey Fever Risk, an interdisciplinary project in collaboration with multiple institutions from India and the UK. Apart from standard tick surveillance, the project studies ecological factors, including natural carriers of KFD like small rodents and the impacts of deforestation and sociological factors such as human behaviours leading to exposure.

Meanwhile, Arunkumar and his colleagues have extended their surveys to cover more parts of Kerala state and are now turning their attention to small animals to understand how the virus is maintained in nature. “We have just begun,” emphasised Arunkumar, calling the study a background survey that could be built upon. “For a full picture, we need to understand much more.”