Updated : October 28, 2019 04:59 PM IST
Stress hormones from tiger scat samples in Bandhavgarh and Kanha Tiger Reserves in Madhya Pradesh revealed that the charismatic cats are highly stressed during the tourist season compared with the non-tourism period in both reserves.
While the National Tiger Conservation Authority (NTCA) stipulates a maximum of 40 vehicles should be allowed in tiger reserves per day, the research team noted that both reserves accepted much higher numbers per day on average.
The study authors recommend more stringent regulation of vehicular traffic, number of tourist vehicles, shifting of artificial waterholes away from tourist roads and reducing other anthropogenic disturbances, including the relocation of villages from the core area of tiger reserves.

Ever wondered how tigers feel in response to hordes of vehicles ferrying tourists eager for the thrill of a perfect close-up encounter?

Now, a study examining stress hormones in tiger scat collected from two popular central Indian tiger reserves has revealed that these iconic carnivores suffer from high levels of physiological stress due to wildlife tourism and a large number of vehicles entering the parks.

Prolonged stress can adversely affect both survival and reproduction. “Chronically elevated glucocorticoid levels can negatively impact growth, reproductive success, immunity, and cause muscular atrophy,” explained senior author Govindhaswamy Umapathy who is a principal scientist and project leader at the Laboratory for the Conservation of Endangered Species (LaCONES) at CSIR-Centre for Cellular and Molecular Biology (CCMB), Hyderabad. “If it continues it will have a definite impact on the population in the long-term.”

Interestingly, a previous study by the authors, published in 2015, showed that tigers introduced in Sariska Tiger Reserve in Rajasthan failed to reproduce, probably due to stress elicited by human disturbances.

Classed as Endangered by the International Union for Conservation of Nature, tigers (Panthera tigris) have lost over 95 percent of their historical global home range because of a myriad of threats from humans. This iconic species is now restricted to fragmented habitats, usually protected areas, amid human-dominated landscapes.

Meanwhile, ecotourism has soared over the decades and conservationists are concerned about its impacts on endangered wildlife. Until now, little was known about the impact of tourism on the physiology of these charismatic cats.

For the study, the team focused on two reserves, each home to a large population of over 60 tigers, situated in the central Indian state of Madhya Pradesh (which was recently declared the “Tiger State” of India): Bandhavgarh and Kanha tiger reserves. Both are surrounded by a matrix of forest and land used by humans. Fifteen villages inside Bandhavgarh Tiger Reserve harbour over 6000 people and a livestock population of 11,000. Similarly, the buffer zone of Kanha Tiger Reserve is home to around 129,000 people and more than 85,000 cattle. 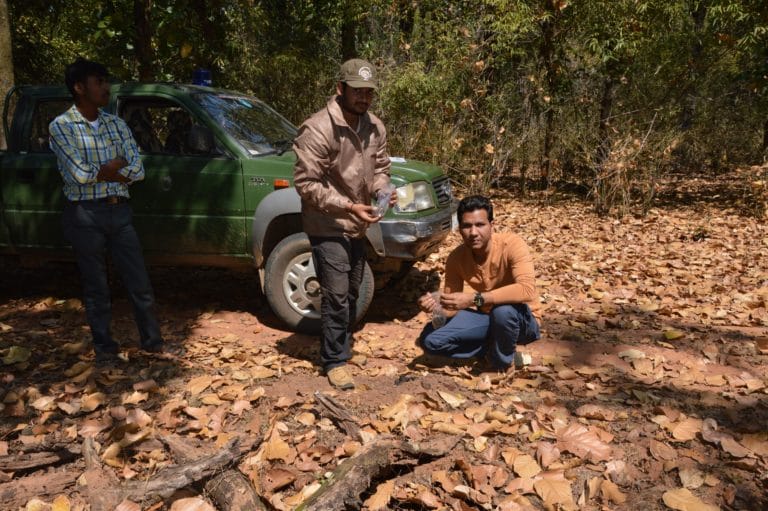 Researchers collecting tiger scat samples to take back to the lab for extraction of the stress hormones. Photo by G. Umapathy.

In 2015, the researchers scooped up 206 tiger fresh scat samples during the tourism period between January and March and the non-tourism period, the month of September. From these samples, they extracted glucocorticoid metabolites—steroid hormones that are released when the animals are stressed—and quantified their concentrations using a cortisol enzyme immunoassay. They also determined the gender of the tiger to see if there are differences in the concentrations between males and females.

For disturbance levels due to tourism, the team gathered data from the forest department on the number of vehicles entering the parks and tourist footfall. As both reserves have multiple routes and points of entry for vehicles, sample locations were classified as ‘high’, ‘moderate’ and ‘low’ depending on the presence of livestock and villagers; wood cutting and lopping; and vehicular movements.

“Non-invasive fecal sampling and assessment of glucocorticoids (stress biomarker) provides a reliable animal-welfare friendly method for tracking the stress levels of cryptic wildlife species such as the tiger,” said Edward Narayan, senior lecturer of animal science at Western Sydney University, who was not involved in the study and specialises in non-invasive reproductive and stress endocrinology.

Tigers exhibited higher levels of glucocorticoid metabolite concentrations in both reserves during the tourism period compared with the non-tourism period, meaning that they were more stressed when tourists are around. And while the authors had anticipated a slight increase in stress, what they found was much higher. “It was expected to be a slight increase but a significant increase was recorded,” Umapathy said.

They did not find any significant differences in the glucocorticoid metabolite concentrations between males and females during both tourism and non-tourism periods.

“Stress plays a pivotal role in the ecology of wildlife species and increased perceived stressors in the wild. For example, human-induced disturbances can cause significant changes across the brain-endocrine-tissue pathways leading to over-expression of the stress biomarker (cortisol),” explained Narayan. “Cortisol can have life-long significant negative impact on all aspects of wildlife ecology including growth and development, maturation, reproductive fitness, behaviour and survival.”

What’s more, the glucocorticoid metabolite concentrations grew higher in Bandhavgarh Tiger Reserve as the level of disturbance and the number of vehicles increased.
Regulating vehicular entry to tiger reserves
Bandhavgarh Tiger Reserve received 106, 535 visitors while Kanha Tiger Reserve accepted 137, 644 people during a 9-month long tourism season from October 2014 to June 2015. To travel inside the reserve, an average of 85 vehicles were used per day in the former reserve and the latter accepted 106 per day.
Tourism is restricted to only 20 percent of the core areas of the reserves and a maximum of 40 cars per day are permitted as per guidelines laid down by the National Tiger Conservation Authority (NTCA) in their 2010 management plan.
While the authors did not quantify how much of the core area was used for tourism, they noted that it appeared higher than the 20 percent suggested by the NTCA. Additionally, they pointed out that both reserves have permitted much higher numbers of vehicles than the 40 recommended by the NTCA, especially Kanha Tiger Reserve, which allowed an average of 106 vehicles per day.
The findings have implications for the management of reserves and conservation. Some of the measures advised by the authors are more stringent regulation of vehicular traffic and the number of tourist vehicles entering the reserves; shifting of artificial waterholes away from tourist roads; and reducing other human disturbances, including the relocation of villages from the core area of tiger reserves.
Umapathy also highlighted the need to conduct similar studies in other Indian tiger reserves and also to examine the impact of increased glucocorticoid metabolite concentrations on the reproductive potential of the wild cats in the long-term. 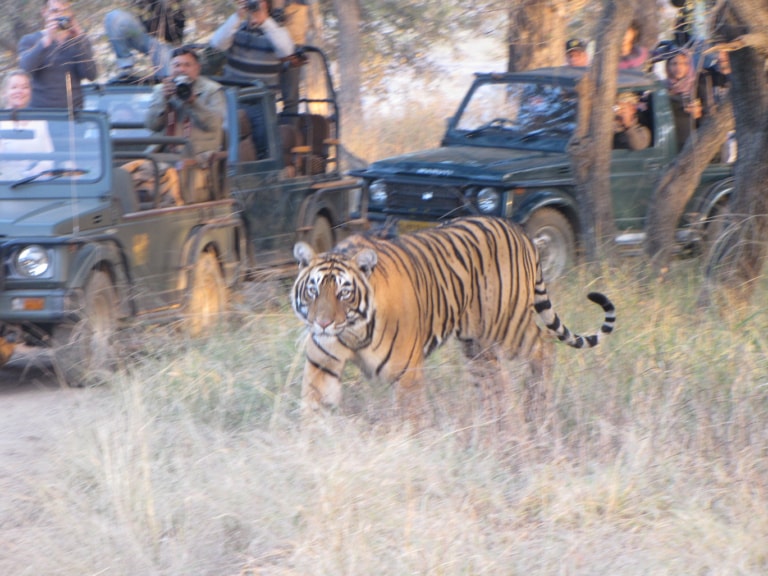 Tourist vehicles near a tiger at Sariska Tiger Reserve. Photo by Subhadeep Bhattacharjee.