The second Goa Renaissance: How luxury hospitality is rewriting the Goan experience

Updated : June 20, 2019 12:34 PM IST
Parts of Goa, in their quiet way, have begun pushing back against chaotic tourist hordes.
In the first of a two-part series on Goa, we look at how sharp-witted hoteliers are redefining the stay experience for discerning travellers.
If The Postcard Hotel offer a ‘transformative’ stay experience, La Maroma Estate by Vianaar Homes blend ‘villa living’ with carefully curated local experiences, and W Goa revives the state’s reputation as India’s party capital.

Are you among those who mourn Goa’s ‘loss of innocence’? Are you nostalgic about the tropical paradise of the past? You may never be able to recreate those simple times; a vast part of the state is blighted by unplanned construction and the angry red pocks left behind on its landscape by indiscriminate mining. But parts of Goa, in their quiet way, have begun pushing back against chaotic tourist hordes. These neighbourhoods live in bubbles, but you have several such bubbles—artisanal and exclusive. This is the second phase of Goan renaissance, as a long-term resident, Sucheta Potnis, who herself runs a villa property, Summertime, tells me.

The ones pioneering this movement to reclaim Goa’s vibrant past but in newer ways, are sharp-witted hoteliers who are cutting a swathe across the coastal state. Among the newest luxury retreats is the unconventional The Postcard Hotel, founded by Oberoi ex-president Kapil Chopra. Fresh off-the-ground, there are already three ‘Postcards’ in Goa — The Postcard Moira in the heritage village of Moira, The Postcard Velha, set amidst 300 acres of coconut plantation, and The Postcard Cuelim in the lush green south Goa. Among the newest luxury retreats is the unconventional The Postcard Hotel, founded by Oberoi ex-president Kapil Chopra.

The attempt is to break from the rigid rules of luxury hotels — there are no check-in or check-out times; the breakfast is truly all-day, and the pace is leisurely. Chopra calls The Postcard Hotel, which has ambitious plans to set up almost 100 properties across India, “as transformative hotels.”

The hotelier looks at the state as a potential design capital of India. “It has historic houses belonging to the Saraswat Brahmins and the Catholics. It has a unique blend of culture and design, very good food, great beaches, churches and temples. Unfortunately, our tourism policy has encouraged charter tourists. You will be surprised to know that the biggest FIT (Free Independent Tourist) operators, whose clients live at the Taj palace hotels or the Oberoi hotels, don’t list Goa on their itinerary. Now, with us coming in, they have put Goa on the map. FITs look for very alternate, often free-spirited experiences in terms of stay and destination. The FITs we are looking at don’t mind paying $500 per night.”

Design as a differentiator

Design is at the core of this nine-room The Postcard Moira, set in a restored 214-year-old Portuguese-era mansion, surrounded by verdant fields, old homes and scenic views. At the boutique property, design, luxury and heritage coalesce in a seamless whole. The ‘un-lobby’ resembles a living room of a plush home, with ceilings that are sky-high. The trellis and the roof are black in colour, a break from traditional Goan mansions. Design is at the core of this nine-room The Postcard Moira, set in a restored 214-year-old Portuguese-era mansion, surrounded by verdant fields, old homes and scenic views.

Gaurav Malhotra, the affable resort manager, is on hand to welcome guests, often spending an evening with them, recommending unconventional ways to explore Goa. He joins me on a heritage trail through Moira, the village known as much because of its famous son, the late architect Charles Correa, as for its stately churches, the intense green backwaters, the fields, the Moira river, two modern gated complexes that blend in effortlessly, and the delicious Moira banana, a variety that is grown only in this village. “This is a Goa that few see,” he tells me. “It is artisanal, intimate and resides in the villages.” Dining experiences at The Postcard Moira draw from the native culinary culture — the Moira banana is turned into sautéed fritters; the omelette is layered with cashew cafreal.

At the other end of the spectrum is the luxury villa experience. There are several across the state, among them, La Maroma Estate, a gated property with several villas by Vianaar Homes. It is not what you expect a ‘villa hotel’ to be. But then, consider the fact that it is not a villa hotel. Vianaar Homes is actually a real estate company by brother-sister duo Varun and Naina Nagpal. Vianaar has built a range of properties — apartments and villas, which are managed by their housekeeping team.  “We have an entire eco-system set up — housekeeping, maintenance services, estate managers who keep the estate running,” says Varun. 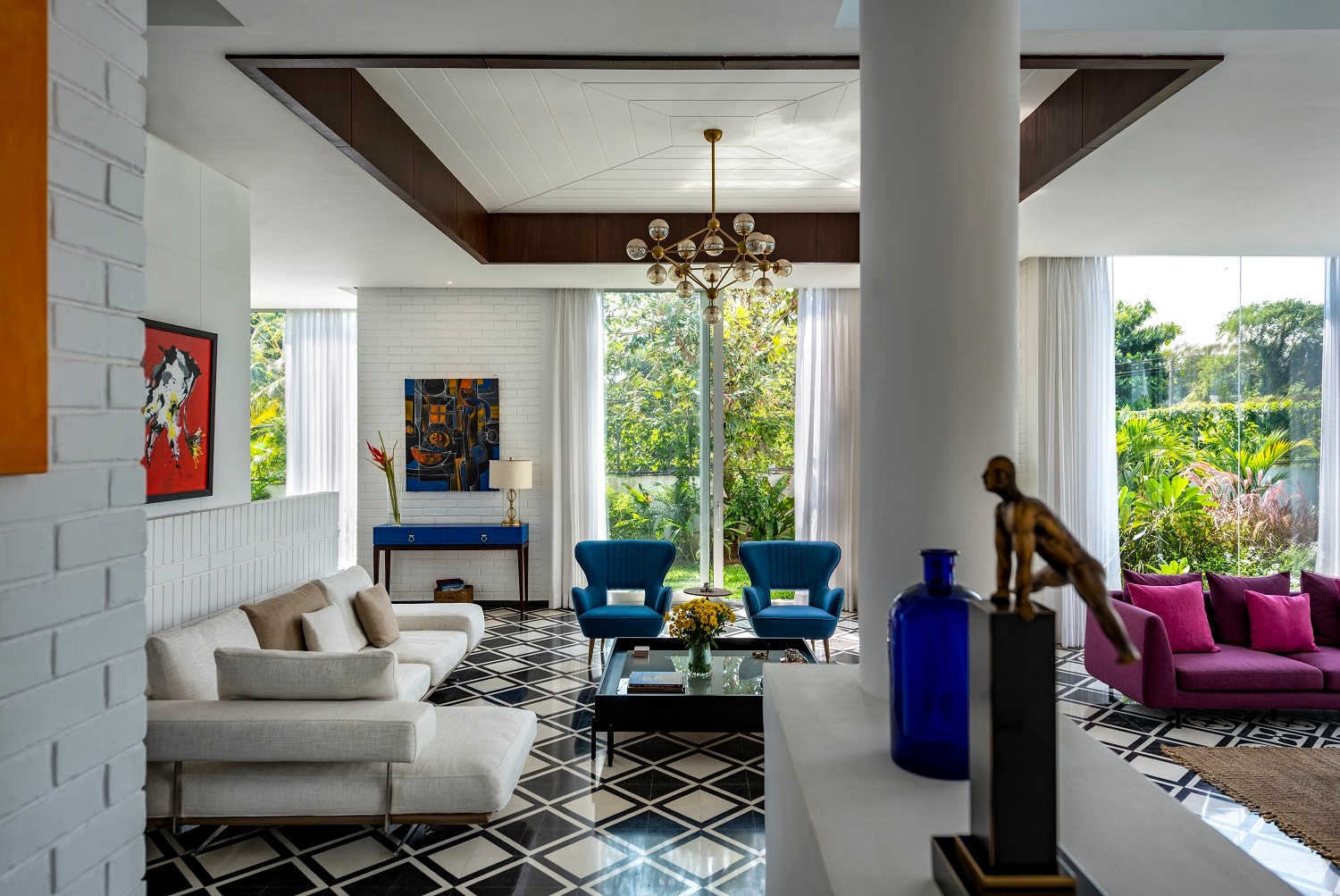 La Maroma Estate is a gated property with several villas by Vianaar Homes. It is not what you expect a ‘villa hotel’ to be.

The unusual thing about Vianaar’s homes, including La Maroma Estate, is the hospitality segment that is built into the model. The owners, who are typically from other parts of India, come for a few days or weeks, on a vacation; the rest of the time, the villas are empty. “We thought, why not rent them out for anywhere between two to seven days to vacationers and travellers? That would also help to keep the staff busy when the owners are not around.” While the apartments can be hired for anywhere between Rs 25,000 to Rs 28,000 per night, the villas are pegged at Rs 40,000+ per night.

And what lush villas these are: Double-tiered; minimally designed with patterned floors and carefully curated artefacts; equipped with a private swimming pool, a kitchen that’s stocked, and a trained housekeeper who cooks your breakfast and makes your bed. What sets them apart are the concierge services that offer ‘Goa off the Beaten Track’. The ‘Goa Insiders’ know all the best-kept secrets. “There are island visits, market tours, Goan cooking classes, pottery sessions, gallery tours,” says the very bohemian Andrea, one of the Vianaar Goa Insider.

Among the experiences she has planned — an evening spent tasting urak in Escobar, a pretty roadside bar with open seating, which you would miss unless you are a local, followed by dinner at Sublime within an atmospheric bungalow in Assagao, considered a Goa institute; barbeque within the little garden surrounding the villa; and a beach getaway to Anjuna where there is a wall separating Santorini-style Eva Cafe, run by a Greek lady, and the scenic, vast Arabian Sea.

Varun reveals that 13 years ago, when he set up the business, no traveller came to Vagathor or Assagao. Today, they are the hubs of cool.  “Even though people bemoan that tourism is falling, they are talking about backpacking foreign tourists who don’t spend much in Goa. The ones who spend are the Indian travellers, and they are looking for quiet luxury and offbeat experiences, whether dining or otherwise,” he says.

This in no way means that Goa has lost its tag as India’s party destination. Consider the success of the luxury-lifestyle hospitality brand, W Goa, which rewrote the rules for luxury hotels. This is where country-inspired reverie gives way to a ‘perfect beach destination’ vibe. In keeping with its ‘young lifestyle’ brand vibe, the hotel doesn’t have a traditional concierge. Instead, it has a W Insider.

The boho-chic hotel, set against the heritage Chapora Fort and Vagathor beach, is done up in shades of white. The flamboyant furniture adds splashes of vibrant colour. With its whimsical villas, cottages and expansive rooms skirted by terraces, sundowners at the buzzing beachside Woobar, and experimental pan-Asian meals at Spice Traders — the hotel has proved to be a disruptor on Goan luxury hospitality scene. Across the hotel’s public spaces, synthwave beats waft out of speakers through the day. Art by local artists such as Subodh Kerkar pay tribute to Goa’s past and its equally vibrant present. In the hotel’s lobby-cum-bar, The Living Room, mixologists offer tastings of, and workshops on unusual cocktails, some made with house bitters infused with local spices.

In keeping with its ‘young lifestyle’ brand vibe, the hotel doesn’t have a traditional concierge. Instead, it has a W Insider. Rishabh, the young man on the job, looks the part of a ‘with-it’ local connect who knows the best places to eat, party in and shop. He shows guests to their room and hangs out at the bar with them.

Cajetan Araujo, the hotel’s GM, contends that Goa has a ‘liberating and hippyish past’, yet it is rich in heritage from its Portuguese and Saraswat Brahmin culture. “It has access to everything any leisure customer would want in terms of dining, relaxation, sports activities, beach activities, yoga retreats and mountainscapes.” And W Goa, he says, fits right in. “Through our passion points of fashion, design and music, we have been able to offer to breakthrough.”

Several hotels that have opened over the past few years are in an attempt to introduce guests to ‘native luxury’ through architecture, design, food and local experiences, even as, in the case of W Goa, they keep the party going. In the tiny emerald land’s jumble of characterful hotels and villas, hotels such as these are transforming the stay experience.