Is trade no longer a driver of economic growth?

India’s merchandise exports grew 9 percent in FY19, the third consecutive year of growth. More importantly, exports reached an all-time high of $331 billion in FY19, higher than the previous high of $314 billion recorded in FY14. While this sounds positive, the broader picture is not encouraging. India’s merchandise exports have grown at a compounded growth rate of just 1 percent since FY12. In contrast, in the 7 years preceding this period, exports had grown at a compounded growth rate of 20 percent. This current period has been the worst performance for exports since at least the 1970s. The point is that even when the economy was growing much slower – the so-called ‘Hindu rate of growth’ – exports were growing faster. 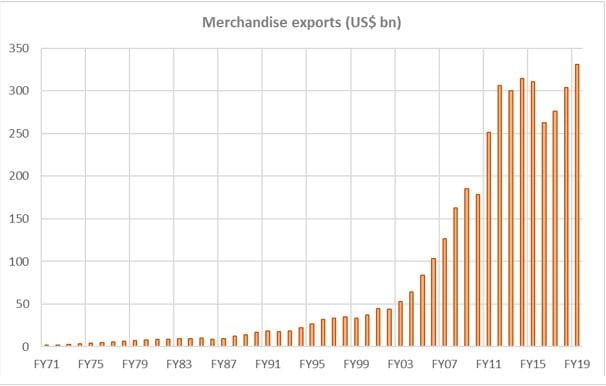 This abysmally weak export performance is generally attributed to two factors – one, that is one more point that suggests that economic growth in India, as measured by the current series, is significantly overstated and second that India has lost export competitiveness and as a consequence India is losing its standing as an exporter in global markets. There is some merit in both the arguments but there is a bigger and more fundamental factor explaining this abysmal export performance. And that being that, external trade has got de-coupled to economic growth. In a sense, trade is no longer a driver of growth. Consider this: in sync with the lower growth in exports, even import growth has been weak. Merchandise imports have grown at just 0.5 percent per year over the past 7 years which again is the slowest since at least the 1970s. Thus, not just exports but even imports are growing much slower. India’s trade itself, in value terms, is not growing in sync with either real or nominal economic growth. And this is a global trend. As per data from the IMF, the World real GDP has grown on average (median) at 3.6 percent in the last 4 decades. And the volume of global (merchandise) exports has grown on average (median) at 5.4 percent during this period. Thus exports, in volume terms, have historically grown significantly faster than economic growth. But in the last 5 years (2014-2018), while the World GDP has grown at 3.6 percent, the same rate as the long-term average, global export volume has grown much slower than world GDP growth at 2.9 percent per annum. This is true in value terms as well. As per data from the WTO, global exports have grown at just 1 percent CAGR in the last 6 years (2012-2018) as against 7 percent growth in the preceding 6 years (2006-2012). Post the global financial crisis thus while economic growth has reverted to the long-term trend, global trade is growing much slower – globally economic growth has become much less trade intensive than before. 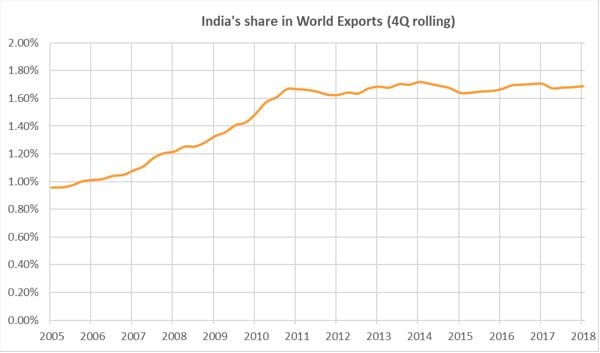 The bottom line, however, is that a big reason why India’s export growth has been so anaemic in the last few years is that it is part of the global trend of sharply lower intensity of economic activity to foreign trade. That said, there is some case to be made that adjusted for that, India’s exports ought to have grown slightly faster than what they have. The fact that they haven’t suggests some loss of relative competitiveness in the export market. As to which of the three factors suggested above are responsible, that is a topic for a separate piece. And one where a definitive answer will probably elude us.