The burning coalfields of Jharia belch poison for local residents

Updated : October 03, 2019 04:30:18 IST
Lives of around half a million people in Jharia in the eastern state of Jharkhand are at risk from land subsidence over abandoned coal mines, where fires have been raging for over a century.
Noxious fumes from the coalfield fires and opencast mining with little heed to environmental safeguards have turned Jharia into the pollution capital of the country, severely impacting the health of local residents.
A plan to relocate people to safer areas has moved at a snail’s pace, with a mere 3,000 families out of 140,000 rehabilitated to a nearby township.

Sahadev Ram and his family of 10 barely escaped with their lives when their house in Niluri Pathra Balurgada village suddenly collapsed without any warning six months ago. Although a tragedy was averted, such occurrences are not uncommon in the Jharia region of Jharkhand, which produces some of the finest coal in India.

More than a century of underground coal mining in Jharia in eastern India has left the land hollow, and houses and other overground structures collapsing due to subsidence has become increasingly common. Ram, 65, gets teary eyed when he sees the ruins of his home from where he also ran a small grocery store. But his troubles have not ended. His wife Kanti Devi is chronically ill.

“She has severe breathing troubles and has become bedridden,” said Ram. “We have been advised by doctors to shift her to a less polluted place, but where can we go? We are destined to be devoured by the raging fire sooner or later.”

He was referring to the infamous underground coalfield fires of Jharia, which were first reported more than a century ago in 1916. When India’s coal mines were nationalised in 1971, some 70 such fires were reported. The fires have only worsened since then. These coal fires continuously belch poisonous fumes in the air, besides making the land in many places intolerably hot. A fire of burning coal in a coal mine in Jharia, Jharkhand. The region is one of the most important coal mines in India and one of the largest in Asia. Photo by Peter Caton/Greenpeace.

Kanti Devi is one among many in Niluri Pathra Balurgada and neighbouring villages who suffer from respiratory ailments from the unremitting pollution. Some have even fallen victim to tuberculosis because of the toxic fumes.

“It is difficult to stand here barefoot even for a second, as the ground is searing hot. The situation turns worse during summers when the underground heat and the sizzling temperatures make life unbearable,” said local resident Manoj Ramani, 48, who sells snacks for a livelihood. “The fire was quite far till a few years ago, but now it is inching closer and has almost touched our homes. Almost every household has people suffering some sort of ailment because of the poor quality of air.”

Some 17 people have lost their lives due to land subsidence in Jharia, according to veteran area journalist Govind Nath Sharma. “Sadly, compensation has been rare and those lucky get it after several rounds of visits to government offices,” he said. “We apprehend around 500,000 people in Jharia and neighbouring areas are inhaling toxic gases from the fires burning at different locations, coupled with severe pollution from coal mining.” 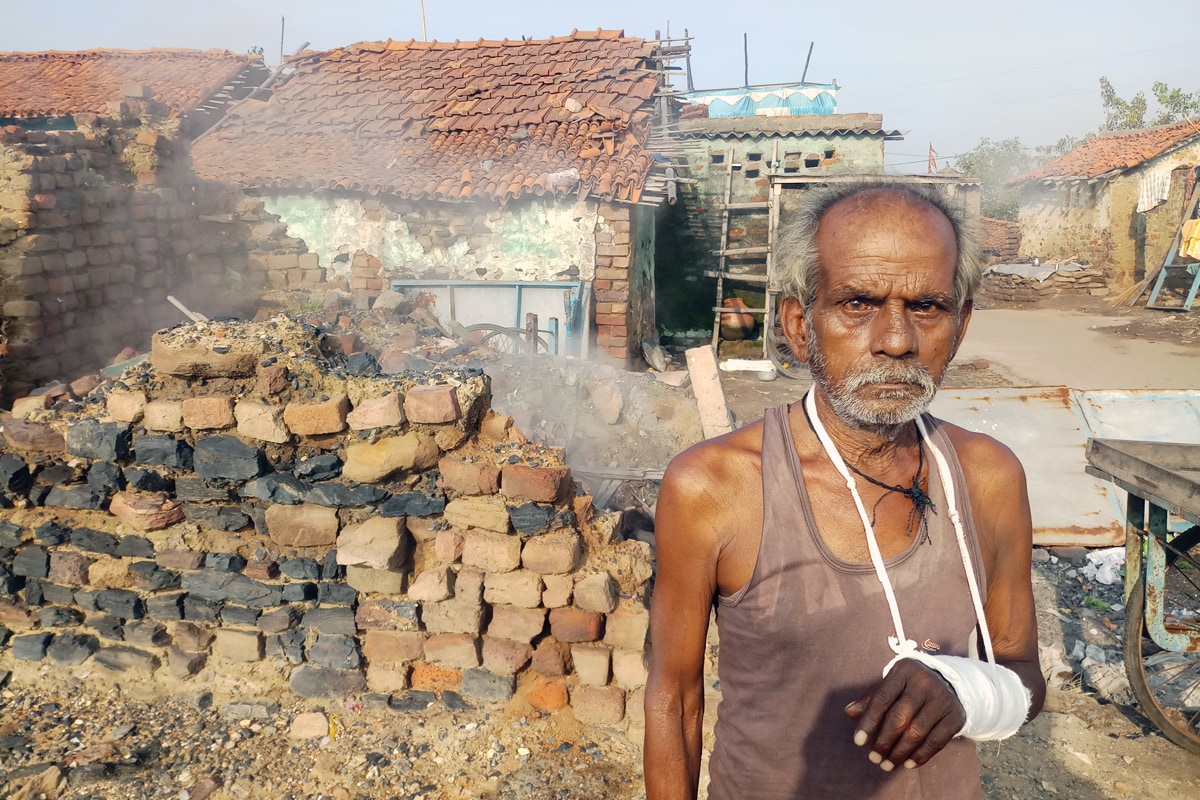 Sahadev Ram’s house is one of the many that collapsed due to land subsidence which is a result of a century of underground coal mining in the region. Photo by Gurvinder Singh.

Not surprisingly, Jharia tops the list of polluted towns in India among the 313 surveyed in a recent Greenpeace India report. The Airpocalypse report, released in January this year by the environmental activist group, collated data on PM 10 in cities in 2017. PM 10, or particulate matter 10 micrometers or less in diameter, is a key air pollutant.

The report found that PM 10 level in Jharia was 295 µg/m3 (micrograms per cubic meter) in 2017, almost three times the permissible limit of 100 µg/m3, while the neighbouring city of Dhanbad registered PM 10 at 238 µg/m3 and was declared the ninth most polluted town in the country. Greenpeace said Jharia’s air would have 207 µg/m3 of PM 10 even if air pollution levels were trimmed by 30 percent by 2024. Noxious fumes from the coalfield fires and opencast mining have turned Jharia into the pollution capital of the country, severely impacting the health of local residents. Photo by Peter Caton/Greenpeace.

Carved out of Bihar in November 2000, Jharkhand is one of the richest states in India in terms of mineral wealth. The state is estimated to have about 40 percent of total mineral resources of India. The forest area accounts for more than 29 percent of the state which is also amongst the highest in India. Jharkhand’s population is estimated to be around 33 million and of that, nearly 75 percent lives in rural areas. Scheduled tribes account for over 26 percent (more than one fourth) of the state’s total population.

However, richness in mineral resources has not translated into development for the state. According to Jharkhand government, the state has 39.1 percent people below the poverty line (BPL) as against the national rates of 29.8 percent.

Since its formation in 2000, there have been four elections to Jharkhand’s legislative assembly. The elections for 81 assembly seats of Jharkhand are expected to be conducted in November-December 2019 in phases. Coal mine workers in Jharia. Photo by Gurvinder Singh.

Although the coal fires do give out noxious smoke, activists also hold current activities of Bharat Coking Coal Ltd (BCCL) responsible for the sorry state of Jharia’s air. Much of the environmental pollution in the area is due to the opencast mines operated by the state-owned company, a subsidiary of Coal India Ltd. Since the year 2000, BCCL has started opencast mining that involves the extraction of coal through an open pit or borrow.

Over 90 percent of the BCCL’s production comes from Jharia’s coalfields, which spans over 273 sq. km and contains an estimated coal reserve of 11,000 million tons. There is an increasing demand for coking coal, mainly in the steel industry, due to rapid industrialisation and urbanisation. In 2018-19, BCCL extracted 31.04 million tons of coal, out of which 30.14 million tons came from opencast mines, according to its annual report. Sales stood at about Rs 151 billion (USD 2.2 billion). 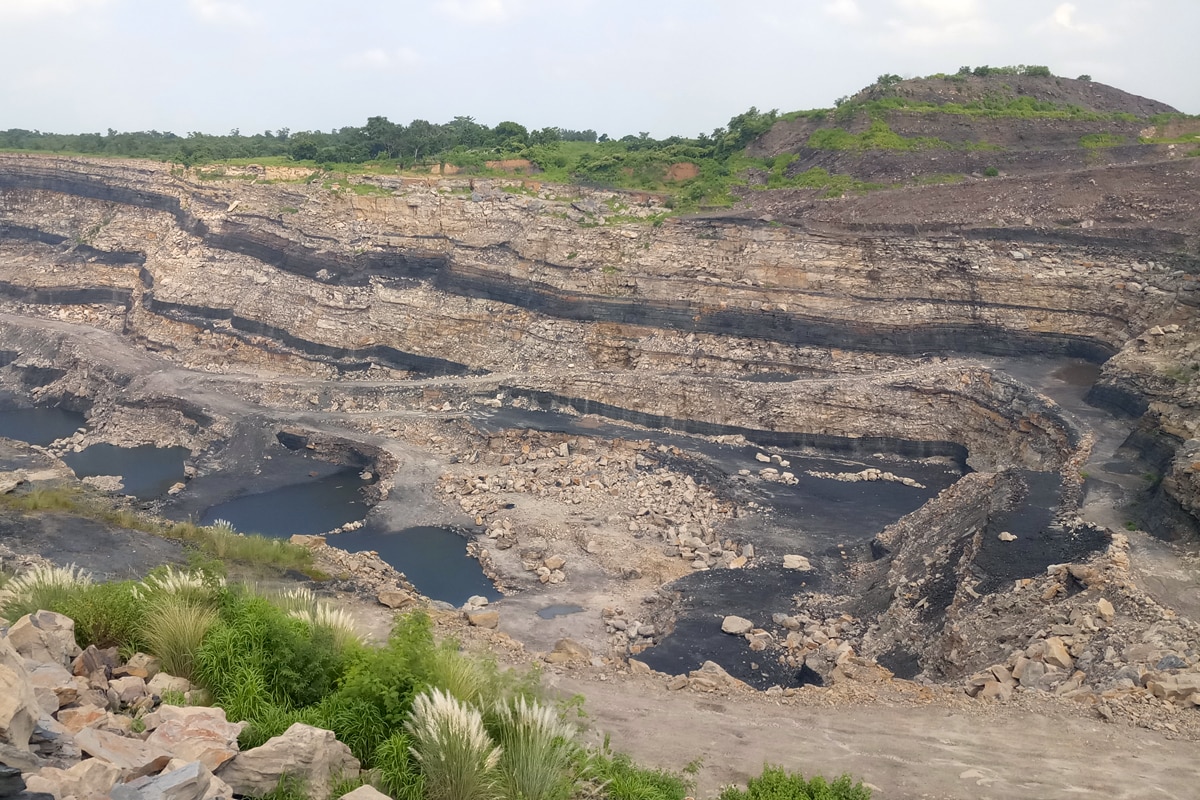 An opencast mine in Jharia that involves the extraction of coal through an open pit or borrow contributes to environment pollution in the region. Photo by Gurvinder Singh.

It is mandatory to fill up the coal pits after extraction, but activists say the rules are frequently flouted. This not only raises the risk of accidents but also leads to coal scavenging. “Children as small as seven or eight years old and women put their lives in danger by going several feet below the ground to collect leftover coal,” said social activist Pinaki Roy. “They earn a paltry sum of around Rs 150-200 per day after spending several hours in the pit, when they are exposed to toxic gases.” Roy provides free tuition to poor children in the area.

“We fear around 2,500-3,000 children are involved in coal scavenging due to acute poverty. Our aim is to change their mindset and connect them with education,” he said. “We are teaching around 60 students, but dropouts are common because of their economic status compels them to return to the dark places.”

Doctors blame increasing pollution for children becoming deformed in Jharia. In 2018, a study conducted by the state government among children aged between 6-14 years found 650 of them were suffering from disabilities, including 150 afflicted with cerebral palsy. The number was 550 in 2017.

“The numbers would certainly be more if the age constraints are removed,” said Manoj Singh, a physiotherapist who was part of the team that conducted the study. “Coal dust is omnipresent in Jharia and clothes turn dark black with soot within minutes of being kept outside in the open. The pollution starts impacting the mothers right from their womb that results in the birth of children with disabilities.”

“It is not just pollution but people are also facing water contamination and it’s scarcity but political leaders hardly seem to be worried…The state polls are expected any time now but no step has been taken to deal with the crisis. Elections come and go but the situation remains the same. Sometimes, sapling plantations are being done but nothing much has been achieved from such initiatives. The situation continues to turn worse with each passing day,” said Govind Nath Sharma. Coal pickers in Jharia scavenge for leftover coal and get exposed to toxic gases for several hours. Photo by Gurvinder Singh.

The Jharkhand pollution watchdog is critical of BCCL for violating environmental norms in its opencast operations. “The overburden dump comprising the rocks removed for the extraction of coal has to be used again for filling up the dig up pits, but instead they’re openly kept near the coalmines that slowly assume the shape of mountains. The burnt particles of coal from the underground fire are also dumped over the rocks and they fly in the air, making the environment polluted,” said Rajiv Sharma, member of Jharkhand State Pollution Control Board (JSPCB). “The tall overburden dump blocks the entry of fresh air into Jharia and thus turns the environment polluted.”

JSPCB in June asked BCCL to work on an action plan to bring down air pollution in Dhanbad by at least 20 percent over the next two years. It has also asked BCCL to plant trees to curb pollution. BCCL did not respond to an email seeking clarification on environmental issues.

Rehab plan yet to take off

Since it’s not possible to put out the coal fires, it is important to relocate people living in close proximity to them. However, rehabilitation efforts leave a lot to be desired. In 2008, BCCL released a master plan to deal with the fire and land subsidence hazards and fixed a timeline of 12 years for resettlement and rehabilitation of local residents.

The responsibility of the resettlement was given to Jharia Rehabilitation and Development Authority (JRDA), which identified 595 sites, including 11 in West Bengal’s Raniganj area where BCCL also operates mines, that involved 79,000 families to be relocated by 2020. A budget of around Rs 70 billion was set aside for the purpose. 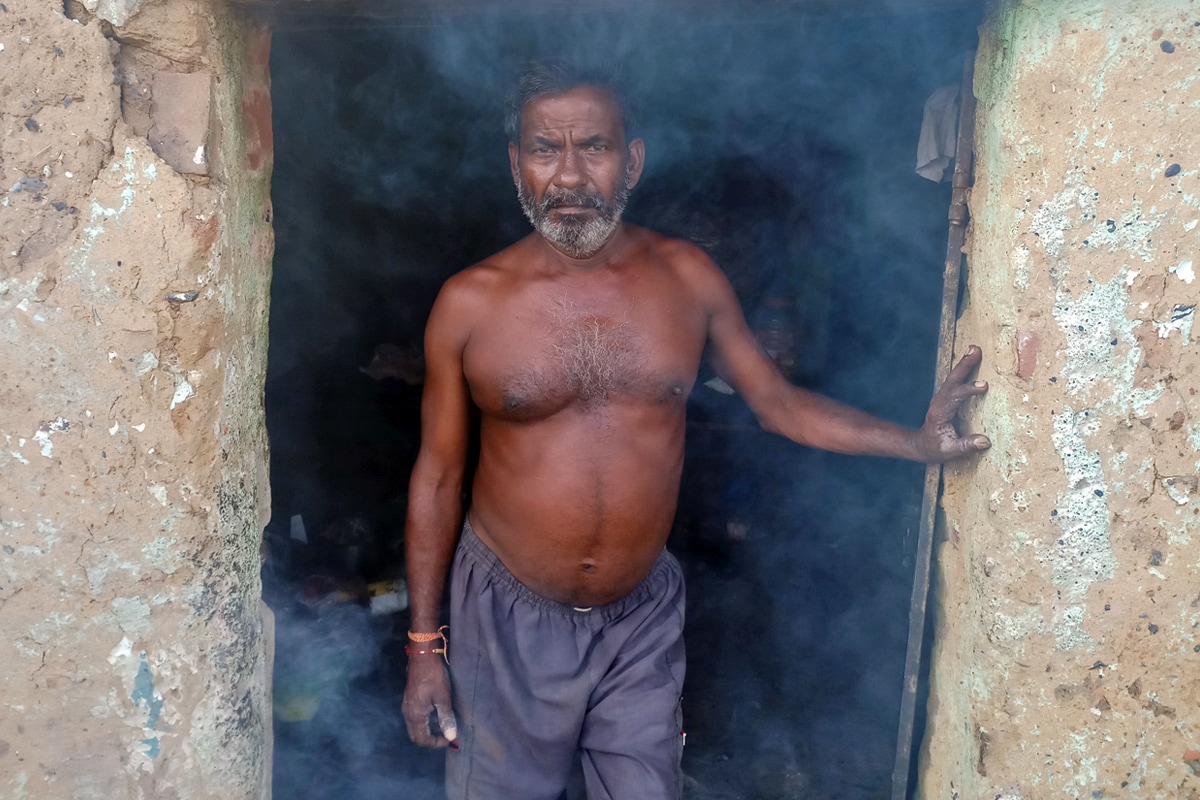 Manoj Ramani, 48, at his residence surrounded by smoke released from the mines. A plan to relocate people to safer areas has moved at a snail’s pace, with a mere 3,000 families out of 140,000 rehabilitated to a nearby township. Photo by Gurvinder Singh.

However, not much has been done since then. In 11 years, just 3,000 families have been rehabilitated so far to Belgoria, a new township around 15 km from Jharia. In the meanwhile, the number of families to be rehabilitated has swelled to around 140,000 from 79,000 families.

“The authorities cannot be completely blamed as people also refuse to move out because most of them are coal scavengers and have livelihood issues,” said Raju Rajak, in-charge, survey, JRDA. “We are trying to create alternative livelihoods in that area in order to hasten the shifting process.”

Even as the rehabilitation process moves at a snail’s pace, the outlook for the people in Jharia remains bleak. “Jharia would vanish in future, and there would be no trace of it,” prophesied Sharma, the area journalist. “The fire like a hungry demon would devour all of us, and pollution would only hasten the diminishing process.” 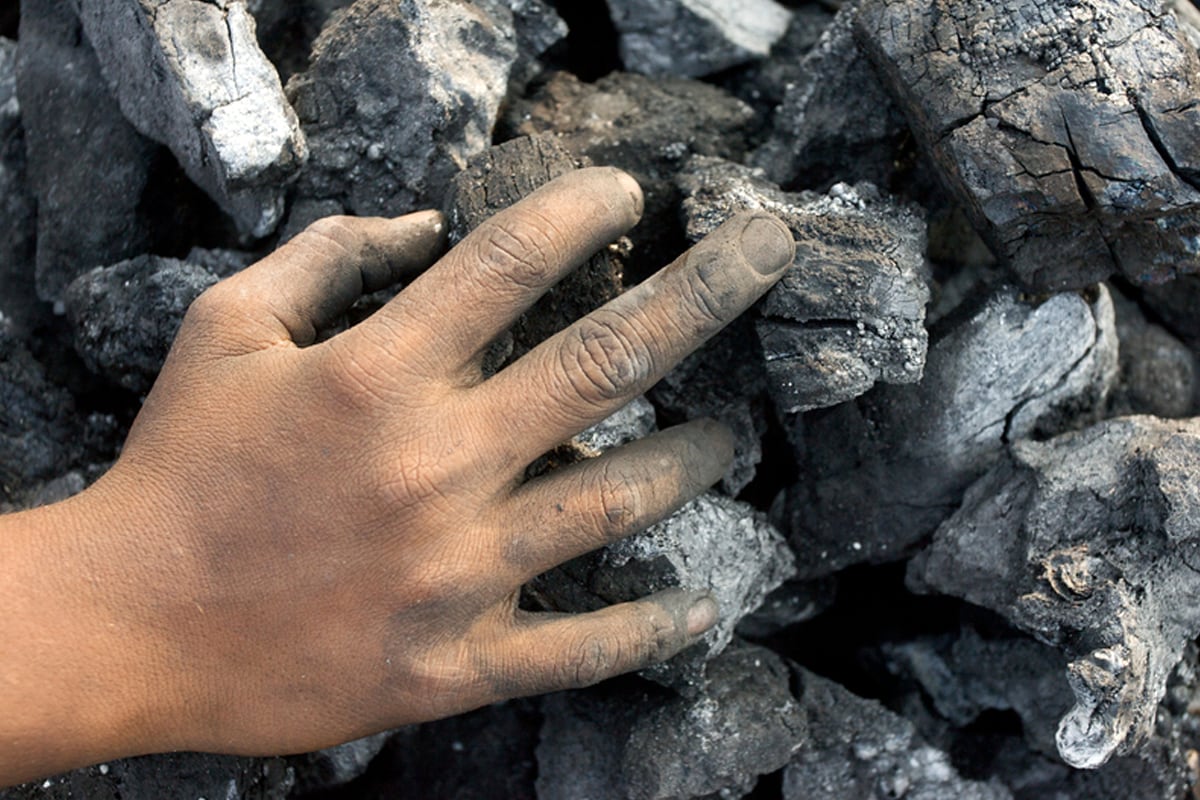 A hand of a worker on burnt high grade coal in Jharia coal mine, ready to be sold at the market. Photo by Peter Caton/Greenpeace.
(This story was first published on Mongabay)
Tags Coal Mines coalfield fires Jharia belch Jharkhand Mongabay-India
Published : October 03, 2019 04:30 PM IST