The big dilemma for Indian students — is an undergraduate college education in the US worth it?

Updated : June 27, 2019 12:28 PM IST
The rising cost of attending American universities as well as political uncertainty in the US after the Trump administration came to power has led to a decline in enrollment of Indian students.
Obtaining work visas has become very difficult for those who want to work in the IT sector and has become even harder for those wanting finance jobs.
Most colleges in the US offer academic flexibility and the opportunity for exploration which make them an attractive proposition for students.

For several years, enrolling in a prestigious American university has remained a top priority for scores of Indian high school students. Many believe that studying in the US culminates in the possibility of better employment options. A reputed American university is also an introduction to education with world-class faculty, state-of-the-art facilities and accompanying — tantalising — opportunities.

But a closer inspection of these numbers reveals that the growth is slowly waning. The 2017 report said the number of Indians studying in the US has increased by only 5.4 percent from a year ago. Growth had tapered from the healthy 12.3 percent increase recorded in 2016-17.

What happened? The rising cost of attending American universities as well as political uncertainty in the US after the Trump administration came to power were the culprits, according to students, teachers and education counsellors.

The US lacks government standards or regulations for tuition fees of universities. As a result, the costs of attending a university in the country are ridiculously high.

In recent years, these costs have continued to gallop. According to data from the Federal Reserve Bank of St. Louis, the cost to attend a university increased nearly eight times faster than wages did in the US with costs of education rising 2.6 percent annually. For Indian parents, this can pinch even more when the rupee weakens against the dollar.

There are broadly two types of US universities — the public ones that are funded by the state and the private kind that rely heavily on tuition fees and private contributions. Private universities are ergo usually more expensive.

Indian students primarily target these private colleges despite their higher costs. The costs are exorbitant by any yardstick.

The average cost of attending a private university like say, Hampton University, Tuskegee University, and Xavier University of Louisiana, is around 25 lakh rupees ($36,000), according to a report by US News.

As you would have guesses, more prestigious a university, higher is the cost. Typically, the cost of studying in a top 20 American university such as Harvard, Yale or Princeton is roughly Rs 53 lakh, or $76,000, a year. Undergraduate degrees are generally obtained after four years. That would set back a family by around Rs 2.12 crore. According to educational consultant, Namrata Pandey, founder of La Mentoraa counselling services, American universities still dominate the preferences of Indian students despite the significantly higher costs compared with their counterparts in the UK, Australia, Singapore, Hong Kong and Canada, among other popular destinations. 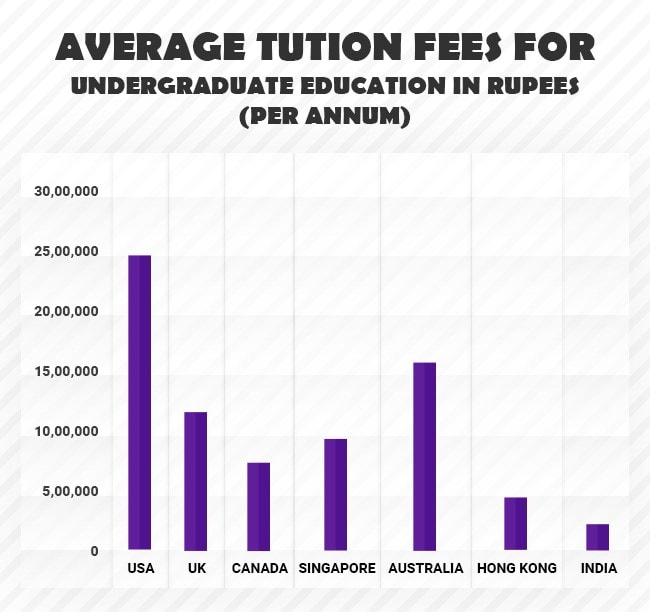 There are two reasons for this. One, admissions to Indian institutes have become highly competitive and are dependent upon a single test — be it the CBSE board exam or an entrance exam. “If a student doesn’t do well on a particular exam on a particular day, his entire future may be ruined. This is simply unfair,” Pandey said.

Soaring cutoffs for Indian universities such as the Delhi University and the notoriously competitive Indian Institutes of Technology (IITs) instill a sense of dread in students who want to enrol in good universities. The “holistic” admissions criteria adopted by American universities alleviate these fears and play a vital role in attracting Indian students.

“While Indian institutes just look at a screenshot of the student’s academic performance, American colleges want to see the whole movie,” she said.

While considering applicants, American institutions tend to look at grades and evaluations of students from class IX onwards and trace a student’s performance across four years in school instead of just focusing on a single exam. in addition, they emphasise on the student’s participation in extracurricular activities and also consider engagement with communities in the form of volunteer work. For bright students who have difficulty securing high marks, American colleges offer the much-needed relief.

While colleges in other countries such the UK, Canada, and Singapore remain popular choices, unlike the US, they still heavily rely on class XII results for admissions.

Second, most colleges in the US offer academic flexibility and the opportunity for exploration.

Counsellor Pandey said most 17-18 year olds don’t know what they want to do for the rest of their life as universities in India as well as places like the UK require a student to enrol in a particular course and oftentimes, it is very difficult to change that course. “In most American colleges, students don’t have to declare their major till the end of their second year,” she said.

She also cited a lack of interdisciplinary educational opportunities as a reason behind the growing dissatisfaction with the Indian education system. “For an engineer who wants to study music as well, India doesn’t provide many options. In America, he will be able to pursue a double major in both music and engineering.”

For many Indian students, an American college education is the gateway to finding employment, obtaining a visa, and finally settling in the US.

But recent developments have created a shift in the American political and social fabric. Since President Donald Trump came to power, anti-immigrant rhetoric has been on the rise, affecting both job opportunities as well as visas available to Indian immigrants.

Stricter regulations for the H1-B work visas that are only awarded to highly-skilled professionals are the main reason behind this problem. The Migration Policy Institute has also said visa denials skyrocketed to about 42 percent in 2018 for H-1B-dependent companies from 4 percent in 2016. OPT (Optional Practical Training) processing delays have recently come under fire for affecting summer internships and jobs of Indian college students in America.

A student who recently graduated from a prestigious American university said obtaining work visas has become very difficult for those who want to work in the IT sector and has become even harder for those wanting finance jobs. Without these visas, students can’t be employed in the US.

“These visas are only offered to students who manage to secure highly competitive positions at the big three IT companies. And where do these companies mainly recruit from? Highly competitive schools like Harvard and Yale,” the student said, requesting anonymity.

So is an American degree worth the trouble? The answer to this question varies for every person and essentially boils down to the end goal behind a college education coupled with the financial burden that is placed on a family.

“Strictly speaking in terms of education, America is unparalleled,” said Raghav Gupta, a student who has completed his first year at the prestigious Emory University in USA. When asked whether he would want to eventually settle down in the US, Gupta responded, “No, I would like to come back to India because I want to be a part of India’s growth story.”

For students like him, who go to the US seeking an unparalleled education to take advantage of the numerous resources that these universities offer, an American college education seems worth it as it helps them achieve their goals.

On the other hand, for students wishing to build a life for themselves in America, the current administration is making it increasingly difficult to obtain jobs and work visas. For these students, countries such as Canada and Hong Kong seem more attractive as they are friendlier to immigrants and provide education at a fraction of the cost compared to the US. While those wishing to work in the IT sector are more likely to get US visas and jobs, it is still a difficult process with only the top students from the top universities securing them.
Tags education Ivy League studying in the US US education US education cost us universities