The Ajodhya hills are alive with the sound of resistance

Updated : June 20, 2019 05:26 PM IST
New hydropower projects planned in the Ajodhya hills area in West Bengal threaten to put biodiversity in danger while increasing the risk of natural disasters.
The upcoming Turga Pumped Storage Project (TPSP) is said to take up 292 hectares of forest land. The indigenous Santal community is likely to be severely affected as it depends on the forest for livelihood and medicinal herbs.
The community alleges that the erstwhile government went back on its promises of jobs and free electricity when the earlier hydropower project on river Bamni was commissioned in 2008.

The picturesque Ajodhya hills of Purulia district in West Bengal are turning into a backdrop for a power struggle. Quite literally.

Ajodhya hills, located in the easternmost part of the Chhotanagpur Plateau, are contiguous with the Dolma range. The hills have a total forest cover of 10,000 sq km with a majority of it being dry, deciduous forest, housing various exotic species. And nestled in the hills is the slow and languid Ranga Barelahar village, currently simmering with an undercurrent of unrest as an indigenous ethnic tribe resists losing forest land to the Turga hydropower project that threatens to displace both humans and animals who have been dependent on it for centuries. Villagers, who are already reeling under severe water crisis, fear that things might take a turn for the worse with the project. Photo by Gurvinder Singh.

The hills are largely inhabited by Santals, an ethnic tribe with a population of over 25,00,000 (25 lakh) across West Bengal, according to the 2011 Census. The tribe speaks Santali, an Austroasiatic language that is the most widely-spoken of the Munda languages. Mostly without formal education and economically disadvantaged, the Santals in Ranga Barelahar village fear that the mindless felling of trees for development would destroy biodiversity in the region and increase the risk of natural disasters in the eco-sensitive zone.

The Turga Pumped Storage Project (TPSP) aims to utilise the waters of the Turga, a tributary of the Subarnarekha river, for peak power generation on a pumped storage type development. An estimated 292 hectares of forest land would be required for the project, say environmentalists.

But the villagers are firmly against the project.

Sushil Murmu, 26, who is among the only three graduates among the 450-odd people in Ranga Barelahar, filed a petition with two others in the Calcutta High Court last year seeking the suspension of the project that could rob them of their livelihood, “We have depended on the forest for ages because it not only gives us firewood but also medicinal herbs for treating various ailments. Tendu leaves collected from the forest are used for making bidi (a type of cheap cigarette made of unprocessed tobacco wrapped in leaves) and these are sold for our livelihood. The project would not only snatch our livelihood but would also force us to migrate to other areas,” he says, adding that Ranga Barelahar and eight other villages located close to the river would bear the biggest brunt if the project materialises.

According to Murmu, the project violates the Forest Rights Act (FRA), 2006, that mandates that a resolution from a gram sabha (meeting of the village council) is needed before implementing any project. The district magistrate administration didn’t take up the matter with the indigenous forest communities, he says.

In January, this year, the High Court ordered a temporary stay on the project till August 31, 2019 while hearing the plea.

Villagers, who are already reeling under severe water crisis, fear that things might take a turn for the worse with the project. “We have to walk for nearly two kilometres every day to fetch water from a well as the tube wells go dry during summer. We sincerely appeal to the government to stop playing with our lives. After all, we have inhabited the forest for generations,” says Suruj Tudu, 50, a homemaker.

As a mark of protest, almost all villagers have graffiti, decrying the Turga project, on the outer walls of their mud-houses. It says that they want their forest to be preserved and do not want the Turga project. 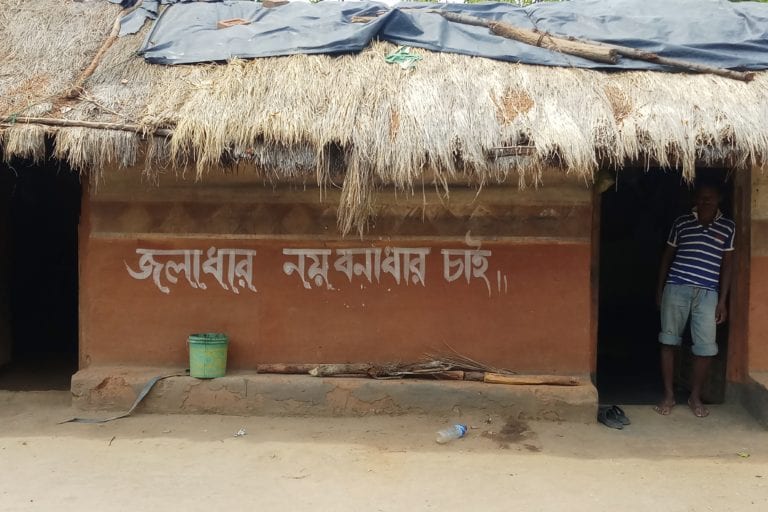 Mud houses in the village have painted their outer walls with lines in Bengali, protesting the project. Photo by Gurvinder Singh.

The resistance against the Turga project partly stems from the bitter experience of the Purulia Pumped Power Storage Project (PPSP), commissioned by the erstwhile Communist Party of India (Marxist) government, over a decade ago. The PPSP was formally inaugurated on the Bamni river, downstream of Bareria village, on the slopes of the Ajodhya hills by then chief minister Buddhadeb Bhattacharya on April 6, 2008.

The project had an installed capacity of 900 MW, backed by four reversible turbines of 225 MW each, funded by the Japan International Cooperation Agency (JICA) and undertaken in collaboration with Japanese building and civil engineering Taisei Corporation. The plant, which caters to power needs of Arambagh in Bengal and Ranchi in Jharkhand, was built at the cost of Rs. 29.5 billion (Rs. 2,953 crores).

Villagers residing around the PPSP plant allege that the state government’s promises of free electricity and jobs turned out to be hollow. “When we staged protests against the project, the government pacified us by promising free power to those residing within a five-kilometre radius of the project and jobs for locals. But soon we realised that it was a ploy to ensure smooth sailing of the work. We continue to purchase power from outside and those who can’t afford it live in darkness. PPSP has 5,000 employees but the locals were not given any jobs. We have been reduced to beggars as the topsoil of the farmlands was all taken up for construction. The area was once lush with greenery, but now it’s barren,” rues Sunita Mandi, 30, a homemaker in Bandhgutu village, outside the PPSP. 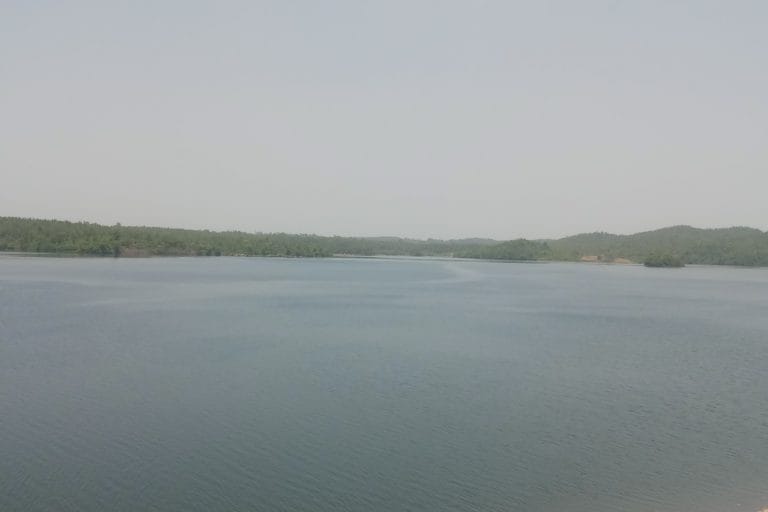 The Purulia Pumped Power Storage Project was inaugurated on the Bamni river, on the slopes of the Ajodhya hills in April 2008. Photo by Gurvinder Singh.

Mandi points out to another alarming fallout of the project. “The dam has turned into a picnic spot for tourists. The plastic and other waste they leave behind are often consumed by our livestock who fall ill and die. Villagers have lost around 40-50 cattle over the past few years. We have informed the local gram panchayat and Block Development Officer but no steps have been taken. We fully extend our support for the movement against the Turga project because villagers there are likely to meet the same fate as ours.”

Four power projects on the cards

“We estimate that around 1,200 hectares of forest land and 12,00,000 trees would be lost for the four projects. The Turga itself would rise up after cutting trees and destroying 234 hectares of forest land of the total 292 hectares required for the project. The PPSP has already consumed 3.5 lakh trees and seven hills. This would intensify the existing water crisis in the area. Besides, biodiversity would be affected and various animals, including elephants, that stay in the forest will become homeless and end up in man-animal conflicts,” said Sourav Prokritibadi, 30, member of the Ajodhya Buru Banchao Andolon Sanhati Mancha, a platform of environmentalists fighting to save the Ajodhya hills. Green cover of the Ajodhya hills. Photo by Gurvinder Singh.

“It is simply not feasible to have four projects on the fragile Ajodhya hills. In fact, the two projects on the Bamni and the Turga are located at a distance of just 2.5 to 3 kilometres from each other. It is a ticking bomb that can trigger landslides and other natural disasters. Add to this the continuous mining and quarrying activities in the hills. Several birds and animals species have already been lost due to the extensive development in this small area. The forest department’s move of planting eucalyptus trees in the name of afforestation is just eyewash. These trees only absorb more water thus aggravating the water crisis,” says Suman Mondal, 28, another member of the organisation, adding that over 20,000 people, mostly Santals, living in 72 hamlets in the area, face the threat of displacement if all the projects are implemented.

A popular tourist destination in West Bengal, the Ajodhya hills are not just known for the scenic beauty, they also have mythological relevance and are culturally significant for the tribals.

According to Hindu mythology, Ram and Sita had stayed in the hills during their exile. According to the Ramayana, Ram pierced the earthen arrow and pristine freshwater springs gushed out for Sita to quench her thirst. The place thus came to be known as Sita Kund. Hundreds of thousands of people gather here for a full moon night Shikaar Utsav or the hunting festival (although hunting has now been banned) around May-June every year, coinciding with the Hindu lunar calendar.

“We demand that the place remain free of any intrusion because it is connected to our spiritual sentiments. But several trees have been cut and the area has become an open ground. There was a time when sunlight found it hard to penetrate the thick tree cover into the forest. But the green cover has vanished now. We demand the protection of Sutantandi (the place inside the forest where tribal people meet and celebrate or where disputes are settled). Where will we go if they cut off our sacred grove of Marang Buru (The Great Mountain, worshipped as a deity).” says a distraught Shyamsundar Mandi, 50, convenor of the Bharat Jakat Majhi Pargana Mahal, a social organisation fighting for tribal rights. According to Mandi, recent excavations in the area have pushed the prehistory of Bengal back to 42,000 years distinguishing it as an archaeologically relevant site. Residents like Shyamsundar Mandi want their space free of any intrusion because it is connected to their spiritual sentiments. Photo by Gurvinder Singh.

When contacted, forest officials refused to speak on the cutting of trees for development. “I cannot speak much on this matter as it is subjudice. A joint forest management committee has been formed to look into this issue,” said Sagar Chakraborty, range officer of Ajodhya Forest Range, Purulia division.

Meanwhile senior officials of West Bengal State Electricity Distribution Company Limited (WBSEDCL), the executive agency for the Turga project, say the protest came like a “bolt from the blue” as preparations were on full-swing to start work. “We had obtained all the necessary permissions from the state and the central government. JICA was also ready with the funding but the High Court order has brought things to halt. Some people are trying to spread baseless rumours regarding the project. We will do afforestation as per rules. We require only a small area of the land for the project. We are trying to address the problems and soon the misconceptions of the locals would be sorted out,” says Swajit Chakrabortty, director (generation), WBSEDCL.

Chakrabortty also brushed aside allegations of false promises made to villagers around the PPSP project on Bamni river. “We never promised free electricity and jobs. We have done a lot of Corporate Social Responsibility (CSR) activities for them and plan to do more in the future.”