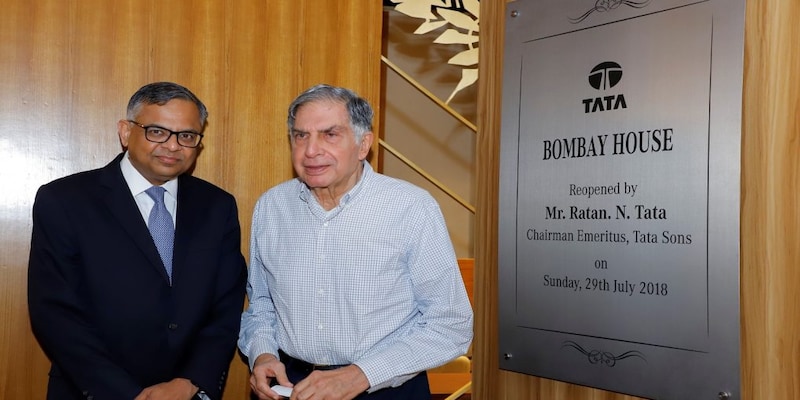 The reopened building was inaugurated by Ratan Tata in the presence of Tata Sons Chairman N. Chandrasekaran and other employees.

Tata Group has re-opened today its iconic headquarters, the ‘Bombay House.’ The reopening of the structure that was closed for nearly a year for restoration was done to mark the 114th birth anniversary of former Chairman, JRD Tata, said the company press release.

The reopened building was inaugurated by Ratan Tata in the presence of Tata Sons Chairman N. Chandrasekaran and other employees.
“It’s a historic occasion and a great tribute to reopen the new Bombay House on JRD Tata birth anniversary. The renovation of this 94-year-old heritage building, the first in its history, has revolved around designing for the employees a more modern, collaborative and informal workplace equipped with the best of technologies and security systems,” Chandrasekaran was quoted saying in the release.
Built on the two plots of land bought by Sir Dorabji Tata from the Bombay Municipality in 1920, the iconic structure was designed by George Wittet, the architect of the Gateway of India.
As per the release, the structure has been provided with several new features including a grand entrance, art installations besides a digital museum among others to give visitors a vibrant experience.
Check out our in-depth Market Coverage, Business News & get real-time Stock Market Updates on CNBC-TV18. Also, Watch our channels CNBC-TV18, CNBC Awaaz and CNBC Bajar Live on-the-go!