Updated : August 01, 2019 12:13 PM IST
CEA Krishnamurthy Subramanian 'made a special request to add a few more suggestions'.
The task force has been getting several extensions in the past to submit its report

In a bid to overhaul the current complex direct tax law, the task force on simplification of direct tax legislation will now submit its report on August 16.

“The government has allowed the task force to submit its report by 16th of August, 2019, in light of the fact that the new members of the task force requested for more time to provide further inputs,” the Finance Ministry said in a press release.

“CEA Krishnamurthy Subramanian had earlier given his suggestions which were incorporated in the report. The report was ready and printed, but he made a special request this morning to add a few more suggestions in the report. Post this, the convener of the panel and Member (Legislation), CBDT, Akhilesh Ranjan, sought a 15-day extension from Finance minister Nirmala Sitharama,” highly placed sources told CNBCTV18 on the condition of anonymity.

“The report will now be submitted on August 16,” sources added.

Finance Minister Nirmala Sitharaman on July 18 had said that a task force on the new direct tax legislation will submit its report by month-end.

"Task force is already working on finalising the report on a new Direct Tax Code which is required to be submitted by July 31. The government will receive the report and we shall take a call on it," she said while replying on the debate on the Finance Bill 2019.

The task force was first set up in November 2017 after Prime Minister Narendra Modi observed that the present law was more than 50 years old and needed redrafting to make it contemporaneous.

Recently, the finance ministry on June 24 reworked the terms of reference of the special task. It had also nominated Chief Economic Advisor Krishnamurthy Subramanian in place of Arvind Subramanian as permanent special invitee and joint secretary (revenue) Ritvik Pandey was also included as a member to the panel. However, the date of submission of the report remained the same, ie, July 31.

Meanwhile, stakeholders, industry and the public have been pinning a lot of hopes on the recommendations of the task force.

Ashok Shah, Partner, N.A Shah Associates LLP says, “ In the recent past, the government has introduced various anti-abusive provisions such as General Anti-Avoidance Rules, equalisation levy on online advertisement, place of effective management and thin capitalisation. These rules are very complex and poses challenge in terms of interpretation. It is expected that the new direct tax legislation proposed by the task force shall replace existing Income Tax Act and will bring a simplified version of income tax code with lesser number of tax exemption, reduced compliance burden and to ensure stable tax regime. It is expected to replace the current complex language with simplified language which reduces scope for interpretation and litigation. It is expected to substitute objective criteria against subjective criteria which enhances litigation.”

But, once the report of the task force is submitted, government will take a detailed view before deciding on the implementation of the suggestions made by the task force.

The sources added, “The implementation could be in phases and a calibrated approach is likely to be followed. It is not necessary that the government will approve all the recommendations and if at all anything needs to be adopted urgently, then it will be done only in the upcoming budget.” 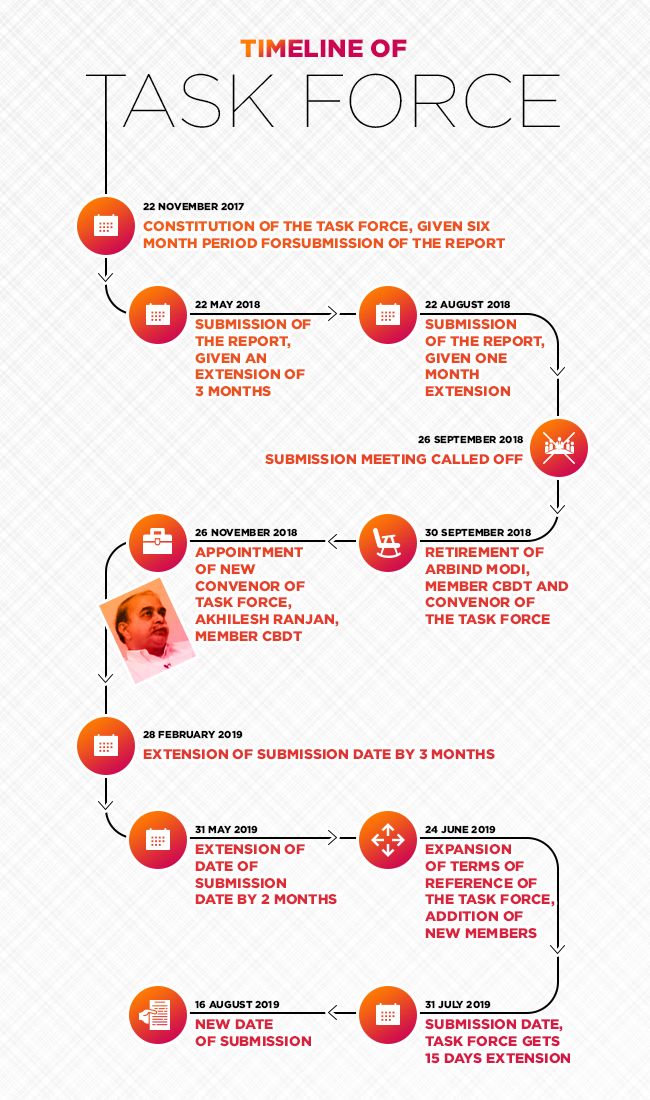