Updated : October 17, 2019 05:55 PM IST
Delayed by years, the development work for Navi Mumbai international airport is going in full swing. Blasting of hills, levelling for ground and diversion of the Ulwe river for the project has already begun. The project is set to complete in 2021.
About 3,500 families are expected to be impacted by the project. While a section of them have taken compensation offered by the project developer, City and Industrial Development Corporation (CIDCO) and vacated their land, some have refused to vacate citing inadequate compensation. They hope elections will finally make the party leaders listen to their demands.
Environmentalists believe they are fighting a lone battle as the impact of the project on local ecology has not been high on anyone’s agenda. They fear the project is a disaster in the making as it is being developed in a flood-prone area.

The flight has been delayed by a few years but the runway is now ready for the work of Maharashtra’s Navi Mumbai airport to finally take off. Once it gathers speed, the development plank may soar high in the sky but the fate of the ecologically sensitive mangroves, flood plains and life of many affected families is bound to crash.

Elections to Maharashtra’s legislative assembly are scheduled on October 21, 2019 and mega investment projects worth of trillions of rupees have been high on Bharatiya Janata Party (BJP)-led Maharashtra government’s agenda ever since it came into power. Even in the manifesto released for Maharashtra elections, the state unit of BJP has put emphasis on infrastructure development including the development of airports across the state.

One such ambitious project is the Navi Mumbai International Airport project. The project has been in the making since 2010 when it had first got environment clearance. Subsequently, it received forest clearance, coastal regulation zone clearance and wildlife clearance. The airport, which was first scheduled to start operations in 2019, now has a new deadline of 2021.

Navi Mumbai airport project’s development cost has been estimated to be around Rs. 100 billion (Rs. 10,000 crore). It was envisaged to reduce the congestion at the present Mumbai airport. The site for the new airport is less than 50 kilometres away from the present airport but the development of a new airport is expected to usher in economic activities around the project site including commercial spaces like hotels. Initially, Navi Mumbai airport is expected to handle 10 million passengers annually and once fully completed it is expected to handle 60 million passengers every year by 2030  and could end up becoming one of the country’s busiest airport.

Aam Aadmi Party’s (AAP) Preeti Sharma Menon told Mongabay-India that “while we definitely need a new airport, one fails to understand why all development projects are being planned in fragile ecosystems.”

“The new airport site (Navi Mumbai) encompasses mangroves and mudflats in addition to a vast number of villages and farms. One cannot even begin to comprehend the extent of damage to wildlife in that region. Rehabilitation of residents has forced them into areas where they cannot practice their traditional livelihoods, there has been no attempt at enhancing their skills. In fact, even the basic schooling facilities have not been provided to the displaced communities. How can development risk such widespread damage to people, economy and ecology?” Menon questioned.

Mongabay-India visited the project area and witnessed that work is going on in full swing. Earth-movers were removing debris and trucks were making a beeline to the centre of the massive landmass where the work was going on at a massive scale.

There are some crucial issues like those related to the Project Affected People (PAP) that are still unresolved but authorities are hoping to address in time and ensure a smooth path for the project. Majority of the area where the Navi Mumbai project is coming up lies in low-lying areas and has several water-bodies and hills. Photo by Nikhil Dixit.
Displaced people hope elections would bring attention to their plight

More than 3,500 families are going to be affected by the airport project. However, at present, they are a divided lot. While some have been rehabilitated and received compensation for their land and houses, others are unhappy with the compensation package and have refused to vacate their land. The story of elections in the Panvel and Ulwe (assembly seats) revolves only around these issues.

For instance, Rajen Koli from the Ulwe village said that he and his family have been given a compensation equivalent to three times the area of their house. He along with several other families from his village have taken the compensation package and vacated their land for the airport project.

“We have also been given Rs 1,500 per square foot as construction cost. House rent has been given for 18 months too. The compensatory land that has been given is on lease for 60 years with a provision of further extending it,” Koli told Mongabay-India

Advocate Prashant Bhoir is also one of the affected villagers and is fighting for the survival of his own family and that of the other families in his village. “There are still several project-affected families who have not been compensated even though the airport work has already begun. Where compensation has been given, several basic amenities like drinking water, cremation ground, bus depot, schools have not been provided yet, hence, we have decided to reject the compensation and have refused to vacate our land,” Bhoir told Mongabay-India.

“The rent that is being given, it also too less, it is only Rs 12 per square feet and that too is given for a limited period of 18 months. Till date, there has been no adequate compensation has been given or announced for fishermen. They are not only going to lose their land, house but are also going to lose their livelihood. How will they be able to earn a living even if they move to another area?” questioned Bhoir. He further said that the villagers are not against the airport but said it is unfair to uproot entire villages and so many families and their livelihoods without giving them appropriate compensation which is commensurate with their living standards.

The sitting BJP MLA from Panvel assembly constituency refused to talk about it stating that displacement of people due to Navi Mumbai is not an election issue in the area.

Another villager from Ulwe, Santosh Wagh, who has got the compensation, said that the issue of rehabilitation is no more an issue for many and not even an election issue.

Bhoir also alleged that one of the reasons why the airport issue is not an issue is because most of the local leaders have become contractors in the project and hence they aren’t raking it up.

The City and Industrial Development Corporation of Maharashtra Limited (CIDCO), however, claims that compensation which was agreed upon by villagers several years ago was given to all of them as per the set conditions, but some of them refused to take it citing reasons like basic amenities like schools, streetlights, roads, crematorium that are yet to be developed.

An official from CIDCO, who wished to maintain anonymity, said that the compensation package which was being given was among the best in the country. “No one has been offered such compensation in the past,” he said.

Damage to the environment not on anyone’s agenda

Factors like the destruction of mangroves and the project’s impact on local ecology may not even matter once the compensation issues are settled. Environmentalists maintain that an alternate site for the airport would have been a better option considering the biodiversity at the current site as it has been a habitat of birds and other animals and a breeding site for several migratory birds.

As per the original plan, over 100 hectares of mangroves and 400 hectares of mudflats would be destroyed forever due to the project. Environmentalists explained that the majority of the area where the project is coming up is low-lying and has several water-bodies, including two major rivers and several ponds. They stated that the ground will have to be raised anywhere between 2-5 metres for the airport which will not only create construction challenges but it will also impact the environment.

Till 2017 end, the majority of the project area was covered with water. Ulwe river, which is the biggest river in the region and runs right across the proposed site, will also never be the same again. There is a plan to change the course of the river Ulwe by 90 degrees and alter another river Ghadi’s route as well.

Debi Goenka of the Conservation Action Trust (CAT) told Mongabay-India, that they have challenged the construction of the Navi Mumbai Airport in the Bombay High Court and it is pending before the court.

“It is a completely unviable project. To start with, it is disastrous from an environmental point of view. They are destroying 400 acres of mangroves, 1,000 acres of mud-flats, 300 acres of forest area, they have to divert five rivers, they will have to reclaim that land by filling it up to 11 meters for that they have to demolish hills,” Goenka said. 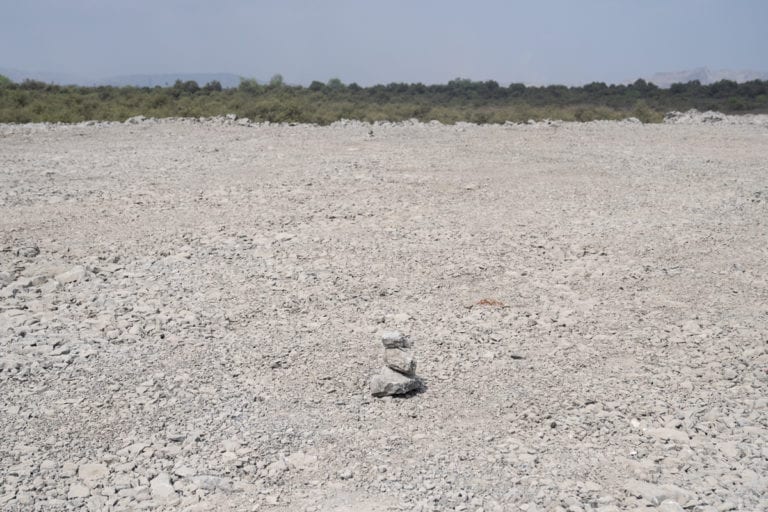 For environmentalists, Navi Mumbai case is like deja-vu where hills that have been standing there for centuries would be cut down. As per the plan, the height of the Ulwe hill which is the biggest hill at the project site would be reduced from 90 meters (currently) to merely 10 meters.

During the initial stage of planning, CIDCO had offered to compensate for the removal of mangroves by planting another plantation at an alternate site. But that had faced severe criticism as the alternate site was more than 200 kilometres away from the current site and it would not have been feasible. The suggestion regarding developing the mangrove sanctuary close to the airport site was also brushed aside as concerns were raised that the presence of mangroves would end up attracting birds endangering flight operations.

Goenka said CIDCO had hired the Bombay Natural History Society (BNHS) to do a bird study and that report said that the airport site is a very bird-rich habitat, there are bird nesting areas and bird roosting areas, surrounding the airport and within the airport.

“The airport will, therefore, be very unsafe to operate particularly during the winter months, when a lot of migratory birds come to the site. This will render the airport unsafe for flight operations because it is risky, why build an airport at all. And which airline will fly to an airport which is known to be risky,” Goenka said.