Updated : July 11, 2019 07:25 AM IST
The larger companies pay a lower share of their profits as tax since they are disproportionate beneficiaries of tax incentives.
The corporate tax structure is not the only thing holding back formalisation or growth of small businesses or contributor to black money in the economy

One of the tenets of taxation is that tax collected should be proportional to the ability to pay. And this gives rise to the progressive tax structure—as incomes rise, taxpayers pay a higher share of their incomes as tax since their ability to pay tax also increases.

In the case of India, for several years this meant at the lower end people paid no tax up to a certain threshold of income, while people at the other end paid roughly 30 percent of their incomes as tax. Through several surcharges and cesses, this highest number has gradually crept up in recent years and post this year’s budget the highest tax rate is now above 40 percent.

Thus, the personal tax system has become extremely progressive in recent years. Perhaps, a bit too progressive. But that is a separate discussion. The point of this piece is that in the corporate sector, we see the opposite scenario. 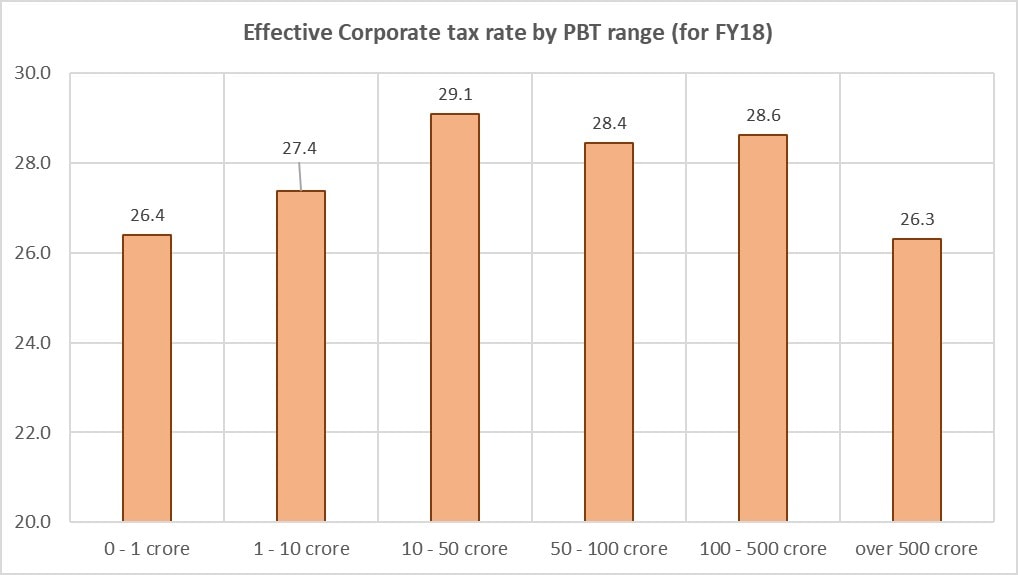 In last year’s budget, this threshold of Rs 50 crores was increased to Rs 200 crores and in the budget presented last week, this was further increased to Rs 400 crores. So, the effective tax rate will fall in other PBT brackets also in the next couple of years.

The fact though remains that our corporate tax structure, as it stands today is inverted. Bigger companies pay a lower share of their profits as taxes than smaller companies.

Tax incentives/exemptions are skewed in favour of larger companies And the reason for this is that tax exemptions are heavily skewed in favour of bigger companies. As the chart above shows, as the PBT increases, the ratio of taxable income to PBT falls – the difference being explained by tax exemptions.

For companies with PBT above Rs 500 crores, a third of their PBT, in aggregate, is subject to various tax exemptions. These exemptions such as accelerated depreciation or for business situated in SEZs are in addition to regular expenditure incurred in running the business. So the larger companies pay a lower share of their profits as tax since they are disproportionate beneficiaries of tax incentives.

In addition to corporate tax, companies pay a dividend distribution tax of 15 percent and, including cess and surcharge, the tax rate comes to around 17 percent.

And after paying this tax, if the shareholder or owner receives dividends aggregating to over Rs 10 lakhs, he pays a tax of 10 percent, which including surcharge and cess comes to just over 11 percent.

Effectively, if a company makes a pre-tax profit of Rs 100 and if it were to distribute entire profits as dividends, the shareholders would receive just Rs 53 after all taxes have been paid. The effective tax rate on corporate profits is thus 47 percent, almost double the headline tax rate of 25 percent. And this creates multiple issues.

The corporate tax structure is not the only thing holding back formalisation or growth of small businesses or contributor to black money in the economy. There are several other reasons. Else, we would not have lakhs of active companies exist. But it surely is an important factor in their overall decision making.

The issue can be posited as follows: what would be the scenario had the corporate tax structure been more benign. Would it have encouraged more small businessmen to want to expand or grow their business and thus take up the corporate form of business? Would it encourage more small businesses to want to invest and grow their existing businesses? Would it reduce the urge to evade tax?

The reduction of the corporate tax rate for smaller businesses to 25 percent is a step in the right direction. But more needs to be done. Eliminating the dividend distribution tax is a good place to start.