Save the Great Indian Bustard from wind power projects

Updated : March 13, 2019 07:55 PM IST
In Rajasthan and Gujarat, home to the majority of the population of the critically endangered Great Indian Bustard, there are increasing cases of its mortality due to collision with transmission lines and wind turbines.
To tackle that, the Ministry of New and Renewable Energy has asked wind farm developers and power transmission line agencies to take risk mitigation measures.
The environment ministry has also taken a series of measures to address the low population of the GIB like conservation breeding sites and species recovery programme.

In a bid to save the Great Indian Bustard (GIB), currently on the brink of extinction, Indian government’s Ministry of New and Renewable Energy (MNRE) has asked wind power developers to identify the bird’s critical habitats in Rajasthan and Gujarat and take risk mitigation measures against bird hits, one of the causes of the reducing population of the bird.

Listed as Critically Endangered under the International Union for Conservation of Nature’s (IUCN) Red List, the GIB also has the highest protection under the Wildlife (Protection) Act 1972. States such as Rajasthan, Gujarat, Maharashtra, Madhya Pradesh, Karnataka and Andhra Pradesh are considered to be GIB’s habitat. But right now, the majority of its population is in Rajasthan followed by Gujarat.

Over the years, its population in India has taken a severe beating from an estimated 1,260 GIBs in 1969 to less than 150 at present – a decline of nearly 90 percent. Indian government’s Minister of State in the Ministry of Environment, Forest and Climate Change (MoEFCC) Mahesh Sharma recently said that as per estimates of the Wildlife Institute of India (WII) the total number of GIB in India is less than 150 individuals.

The main factors that are considered responsible for its decreasing population are the loss of habitat and industrial project. However, in recent times, death due to collision with wind turbines and power transmission lines has emerged as another major factor.

Take Risk Mitigation Measures To Save The GIB

The latest directive of MNRE to power companies is looking at addressing this concern. “It is requested that power transmission line agencies and wind energy farm developers may identify critical power transmission lines and wind energy firms passing through the Great Indian Bustard (GIB) habitats in Rajasthan and Gujarat in consultation with the Wildlife Institute of India (WII) and concerned states governments and accordingly take up risk mitigation measures against bird hits like putting up bird diverters on the conductors, painting of vane tips of the wind turbines,” said a circular (February 22, 2019) by the MNRE to wind farm operators and developers.

But wildlife experts want the authorities to go an extra mile.

“The Great Indian Bustard is staring at extinction, and in Gujarat, the situation is especially perilous. We have been complicit in it. If we are to save the GIB, the need of the hour is to underground existing transmission lines, urgently and immediately, and no new transmission line in critical GIB areas which have been identified should be permitted. It is shameful for a nation so rooted in nature, to allow the extinct of a bird that is endemic to India,” said wildlife conservationist Prerna Bindra, who is also a former member of the NBWL.

The new and renewable energy ministry’s directive is significant as wind power is one of the main pillars of India’s renewable sector. As of January 31, 2019, India’s total installed renewable power was 75,055.92 megawatt and of that 35,288.10 MW was from wind power. India also has an ambitious plan to install 175,000 MW of renewable power including 60,000 MW of wind power by 2022. 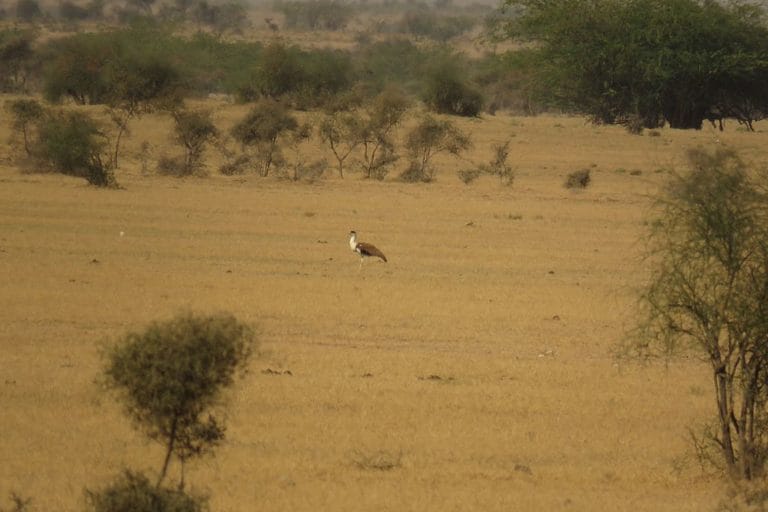 The GIB is facing a threat from power transmission lines and wind farms. Photo by Pawar Pooja/Wikimedia Commons.

Large in size, the GIBs take low flights that lead to the collision with electricity transmission lines often resulting in their death. Thus, the directive is important for states like Rajasthan and Gujarat, where the majority of GIBs are found and also a significant number of wind power projects.

The MNRE’s order to wind farm operators and developers have come after a series of directives and actions by the environment ministry and its expert panels on the issue.

For instance, the standing committee of the National Board of Wildlife (NBWL) in its meeting in January 2018 has “made the submission of the animal passage plan, prepared on the basis of WII guidelines, mandatory for considering approval of any new linear infrastructure project proposal passing through protected areas and other wildlife-rich areas.” The WII guidelines suggest for putting up the “bird diverters on the conductors of the power transmission lines.”

In March 2018, the forest advisory committee of the MoEFCC made it “mandatory for power transmission line agencies to deploy bird diverters on conductors and paint the vane tips of the wind turbine with the orange colour to avoid bird hits.”

The call for action to save GIB has grown in the past few years. The MoEFCC too has taken several measures to protect and conserve the bird.

For instance, the environment ministry has taken an ambitious Great Indian Bustard species recovery programme in collaboration with the WII and GIB range states like Rajasthan and Gujarat, which includes identification of the critical power transmission lines and wind energy farms in GIB habitats and making them GIB-friendly.

The environment ministry is also consulting an inter-ministerial task force including officers of the power ministry, the Central Electricity Authority, environment ministry and the Power Grid Corporation Of India Limited in compliance of the order of the Supreme Court direction in an ongoing case for suggesting various measures for avoiding death of the birds and other animals due to electrocution and collision with the power transmission lines.

The ministry has also taken by conservation breeding measures to check the GIB’s dwindling population.

Indian government’s Minister of State in the MoEFCC Mahesh Sharma while replying to a query in parliament in February 2019 stressed that the environment ministry has taken up the initiative for conservation breeding of the GIB under the endangered species recovery programme scheme in Rajasthan, Gujarat, and Maharashtra.

“In consultation with state government, WII and international experts, a site for the establishment of conservation breeding centre have been identified in Kota district, Rajasthan,” Sharma added.

He further informed that a conservation breeding program has been formulated by MoEFCC, the government of Rajasthan and WII as part of the tripartite memorandum of agreement under the project ‘Habitat Improvement and Conservation Breeding of Great Indian Bustard (GIB)-An Integrated Approach’ with financial support from the MoEFCC.

“An important component of this programme is to initiate conservation breeding as insurance against total extinction and possible restocking of wild populations of GIB and Lesser Florican species in the future,” Sharma emphasised.