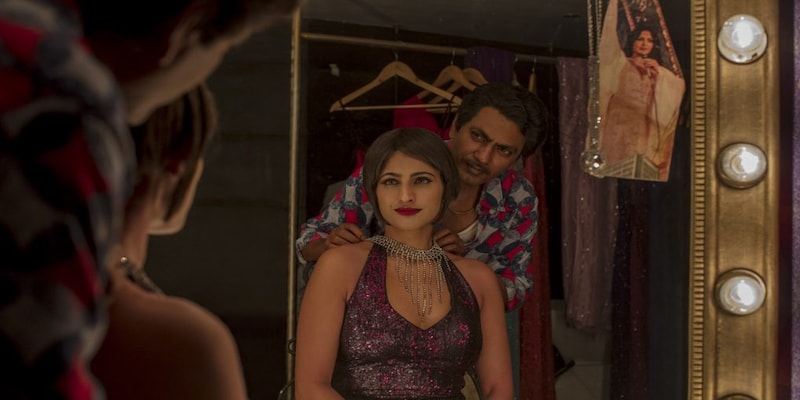 Nawazuddin is good, great even, but he ends up sounding like Wasseypur more than Mumbai. But does anyone care?

I love Anurag Kashyap’s idea of people. His film Ugly says it all. And thanks to Vikramaditya Motwane the song, ‘Ole, ole!’ does not play in my head when Saif Ali Khan shows up on the screen.

Very rarely have movies been better than the books. Take Pride And Prejudice. The book has been converted to TV series as well as films, but the joy of the words is far superior than even watching Colin Firth in a wet white shirt. Michael Ondaatje’s The English Patient brought extra pleasure in the form of Ralph Fiennes and great cinematography.
But if you have read Vikram Chandra’s Sacred Games and have watched Season One of the Netflix series of the book, you will come away with mixed feelings.
I will be the first to say that the book has been written like a Bollywood potboiler (his Red Earth, Pouring Rain was more literary), and the Netflix series is more like a melodramatic Bollywood potboiler.
When you pray daily at the altar of Netflix, you will see everything from Revenge to La Manta and every Korean, Japanese series will give you enough blood to satisfy your baser instincts.
But Sacred Games has so much profanity you wish you could program the computer to mute the curse words, simply because there’s an overdose of them and you are rendered numb to it all.
You rant at the computer screen, ‘How limited is this vocabulary!’ And you rant, ‘Nawazuddin is good, great even, but he ends up sounding like Wasseypur more than Mumbai. But does anyone care?
There are performances that are far superior to Nawazuddin’s, and Kukoo is one of them. She is Nawazuddin’s Lal Pari, someone he covets and even conquers, but the statuesque Kukoo has a secret. Fabulously played Kubra Sait!.
Nawazuddin’s wife Subhadra is marvelous, and leaves an impact not just on him, but on the audience. Her understated performance stands out in the chaos and drama that is her world. Well done, Rajshri Deshpande!
Who can forget Kanta Bai? Her character is so beautifully laid out in the book, you can smell the toddy and hear the steel in her voice. And in the series, Shalini Vatsa glows in her role. And Nayanika? Geetanjali Thapa brings this delicious captive to the screen, a perfect foil to the scary, ugly, unpredictable Bunty (Jatin Sarna).
And even Anurag Kashyap will admit that Katekar steals the show, every time he is on screen. While all other characters are either good or bad, Constable Katekar is perhaps the most rounded character in the book. And Jitendra Joshi is unequalled in talent here.
We’ve seen Saif Ali Khan’s swagger in Agent Vinod, but he’s better here as the crusty, failed cop, on the brink of corruption.
The big cop boss who is evil is nothing new, and Neeraj Kabi is good. But the character is so obviously slimy, that I spent lots of time wondering who could be a better Marathi Parulkar. Very obviously, Sachin Khedekar and yes, Upendra Limaye…
The book obviously points to real life figures in fictionalised events. And the throwaway commentary about ‘the country was changing’ is not satisfying at all.
You long for sentences that give you a feel of the city as here: ‘Sartaj knew where it came from, what made it, but as always he was awed by it. He remembered playing cricket on a Dadar street, the fast pok of the tennis ball and the faces of friends, and the feeling that he could hold the whole city in his heart, from Colaba to Bandra. Now it was too vast, escaped from him, each family adding to the next and the next until there was that cool and endless glow, impossible to know, or escape. Had it really existed, that small empty street, clean for the children’s cricket games and dabba-ispies and tikkar-billa, or had he stolen it from some grainy black-and-white footage? Given it to himself in gift, the memory of a happier place?’
You will binge watch Season Two, and forget about Nawazuddin’s unchanged facial furniture despite being confined to the Anda cell (who shaved him? Trimmed his moustache?), and never watch the sex scenes again and again as you did with Mickey Rourke and Kim Basinger with Joe Cocker playing ‘You can leave your hat on’.
But you will go back to the book, and savour the words.
Manisha Lakhe is a poet, film critic, traveller, founder of Caferati — an online writer’s forum, hosts Mumbai’s oldest open mic, and teaches advertising, films and communication.
Check out our in-depth Market Coverage, Business News & get real-time Stock Market Updates on CNBC-TV18. Also, Watch our channels CNBC-TV18, CNBC Awaaz and CNBC Bajar Live on-the-go!