In what can be a windfall gain to help shore up tax collections for the government, Central Board of Indirect Taxes and Customs (CBIC) is aiming to fetch Rs 39,000-40,000 crore from settling legacy disputes under the Sabka Vishwas scheme​.

People in the know have indicated to CNBC-TV18 that CBIC is now getting in touch with the top corporates and other taxpayers to clear these tax dues at the earliest to meet tax collection targets.

Government officials told CNBC-TV18, "CBIC could garner Rs 5,000 crore from top-200 taxpayers willing to settle their claims. The government is trying to get the entire amount of settlement before March 31, so that the funds can be calculated for the current financial year itself, which will help the government meet the revised targets."

"The majority of taxpayers have committed to settling their disputes and are paying in the range of below Rs 100 crore, each. CBIC estimates to get Rs.39,000-40,000 crore,” officials added.

Finance minister Nirmala Sitharaman had announced the scheme in Budget 2019-20 and offered a complete waiver on interest and penalty and provided immunity from prosecution.

According to the contours of the scheme, any taxpayer applying under the scheme is required to pay the principal amount if they made a voluntary disclosure of tax dues. For cases that are under adjudication or appeal, the scheme offers a 70 percent relief on tax demand of up to Rs 50 lakh. For tax demand above Rs 50 lakh, the relief was 50 percent.

The scheme kicked off in September and ended on January 15. After applying under the scheme, the taxpayers get a maximum of 90 days to clear the tax dues, as per the proposed settlement.

Here is a comprehensive list of top 15 taxpayers, who have committed to settling their legacy disputes and will now have to pay a final amount as per the contours of the scheme. 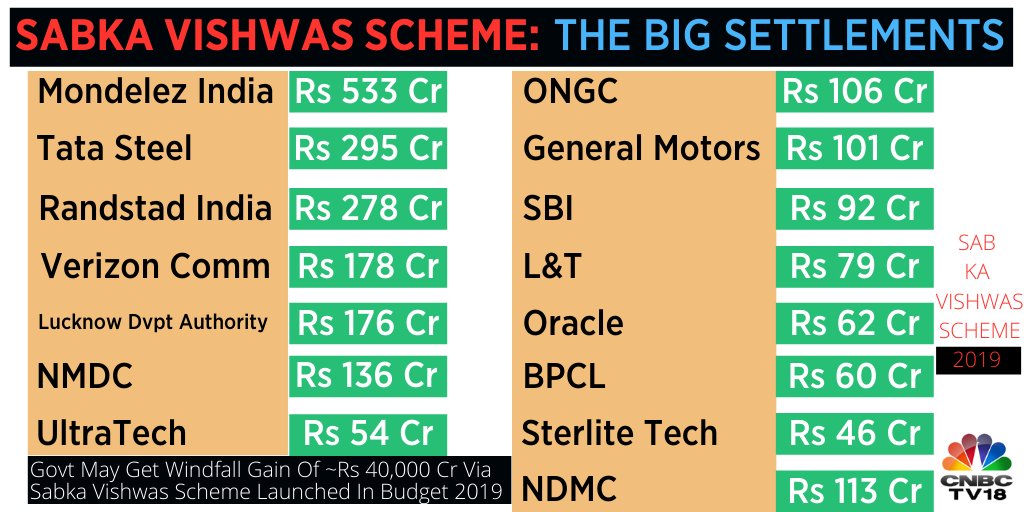