Rupee will find its own level, RBI only checking INR volatility: Nirmala Sitharaman

Rupee will find its own level, RBI only checking INR volatility: Nirmala Sitharaman 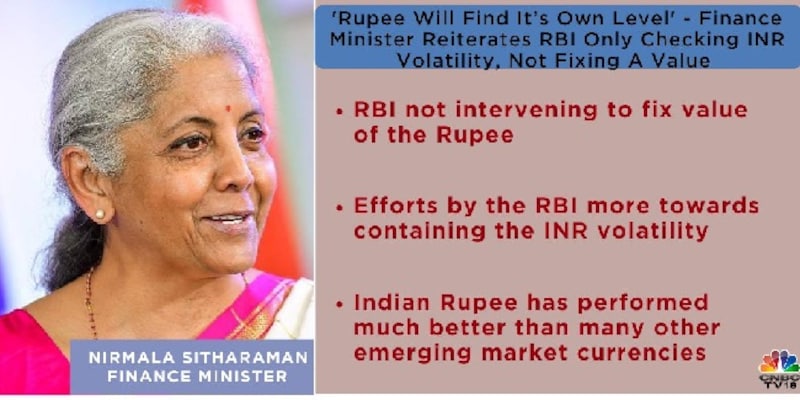 Nirmala Sitharaman said that she is not looking the current level as rupee sliding but rather as dollar strengthening. More deets here

Finance Minister Nirmala Sitharaman said Reserve Bank of India (RBI) is not intervening to fix value of rupee value. The central bank is only checking rupee volatility and the Indian currency will find its own level, she said while addressing the media in Washington DC on her official visit to the USA.

The efforts by the RBI, Sitharaman added, is not to intervene in the market to fix the value of rupee.
"So, containing the volatility is the only exercise RBI is involved in. And I have said this before , the rupee will find its own level," the FM said.
ALSO READ | Nirmala Sitharaman wants cyrpto data exchange between jurisdictions to combat tax evasion
She further said that she is not looking at it as rupee sliding but rather as dollar strengthening.
"Dollar is strengthening incessantly . So, obviously all other counties are performing against a strengthening dollar. It’s a matter of fact that India’s rupee has probably withstood this dollar rates going up. The exchange rate is in favour of dollar strengthening. I think Indian rupee has performed much better than many other emerging market currencies," Sitharaman said.
On Indian economy and inflation, she said that macroeconomic fundamentals and forex reserves are good.
"We are in a comfortable position. And that is why I keep on repeating that inflation is at a manageable level. We have to be conscious of the position we are in compared to rest of the world. I am not asking for celebration but it is true that we are holding together and I am very conscious , particularly of the fiscal deficit," she said.
Referring to her meetings on the sidelines of the annual meetings of the IMF and the World Bank, she said there's certainly a lot of appreciation about India's digitisation success.
"In fact, with a sense of amazement that India could do it in such a short period, it's digital applications which have been successful, how people have adapted to it. And the way in which across the board, now digital is panned out, it's not just payment, it is also health, it's also education, it's also looking at health related vaccination - COVIN- and so on, she said.
"So, India stacks are both the point of admiration and the manner in which it has been rapidly developed, But even better, that we were able to spread it and reach a level of saturation and many of them. And that it is kept as a common public good, is also recognised," Sitharaman added.
Earlier during her meeting with the World Bank President, the finance minister mentioned that the World Bank has been a valuable partner of the G20 since inception and India looks forward to close collaboration with the World Bank during the upcoming G20 Presidency.
ALSO READ | Indian economy on course to grow at 7% in FY23 despite global headwinds: FM Nirmala Sitharaman
-With PTI inputs
(Edited by : Anshul)
Check out our in-depth Market Coverage, Business News & get real-time Stock Market Updates on CNBC-TV18. Also, Watch our channels CNBC-TV18, CNBC Awaaz and CNBC Bajar Live on-the-go!