According to data from Goldman Sachs, India has seen more money being pledged in manufacturing and capacity expansion in the last 12 months –- at a little less than Rs 20 lakh crore -– than in the past seven years.

Whether it's production-linked incentives or the prospects of renewable energy, giants like Reliance Industries, Adani Group as well as Tata Group have set aside big chunks of money for fresh capacities in the areas of their interest. But that's not the end of the list.

India has seen more money being pledged in manufacturing and capacity expansion in the last 12 months –- at a little less than Rs 20 lakh crore -– than in any of the past seven years, according to data from Goldman Sachs. However, the pace of new project announcements has slowed recently as global inflation threatened to make everything from inputs to interest rates more expensive for the owners, while forcing the end consumer to cut back on purchases.
Yet, hope floats that this – the phase of unabated price rise across countries – too shall pass without much damage to the Indian entrepreneur’s risk appetite and borrowing capacity. 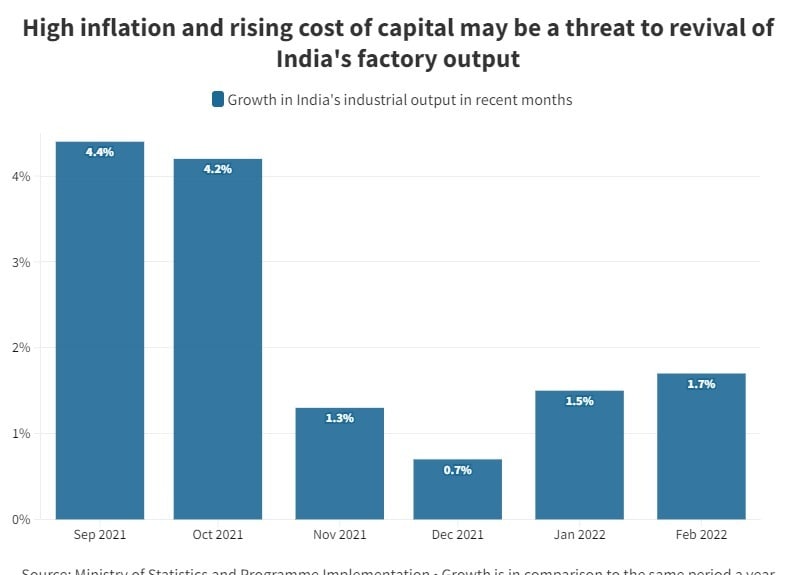 "Cumulative IIP (Index of Industrial Production) for the first 11 months of FY22 is a marginal 0.013 percent higher compared to the corresponding 11 months period from April 2019 to February 2020. In short, Indian IIP is still struggling to grow above the FY20 levels and the IIP for February 2022 would have been rather disappointing had it not been for the generous base effect," India Infoline said.
The tide might be turning for the better. Or, one must say, it could have turned even earlier, if not for the rise in prices of crude oil and computer chips, cooking oil and cargo containers, and nearly all things in between.
This could be useful to know for those looking for a relatively safer destination to park their capital in a world nursing the wounds of a pandemic and watching the unfolding of a war that could get more devastating.
Can India be that destination for global capital? "There are plenty of positives, we can fall back on. The purchasing manager indices are very strong, industrial production is strong, and earnings are beating expectations," Mark Mathews, head of research, Asia Pacific, Bank Julius Baer & Co, told CNBC-TV18 in an interview while warning about the risk of inflation and rising interest rates.
A recovery in manufacturing and jobs is also a dire need for the local economy that’s facing a double blow from inflation and unemployment. Fresh investments require money and the cost of money is likely to rise in India, too, as the Reserve Bank of India (RBI) is expected to hike interest rates to tame inflation.
The rise in cost of capital could deter investors but RBI can no longer ignore the pressure of price rise. While it is reassuring to see that those with the capital did find reasons to invest in factories, one can only hope that the rising costs don’t break their spirit.
Check out our in-depth Market Coverage, Business News & get real-time Stock Market Updates on CNBC-TV18. Also, Watch our channels CNBC-TV18, CNBC Awaaz and CNBC Bajar Live on-the-go!