The Reserve Bank of India’s balance sheet grew about 30 percent to Rs 53.3 lakh crore in fiscal year 2020, from Rs 41 lakh crore the year before, the central bank said in its newly-released annual report.

The increase on the asset side was due to increase in domestic and foreign investments by 18.4 percent and 27.3 percent, respectively, increase in loans and advances by 245.8 percent and increase in gold by 52.9 percent, the Reserve Bank said.

On the liability side, the increase was due to increase in notes issued, other liabilities and provisions, and deposits by 21.5 percent, 30.5 percent and 53.7 percent, respectively.

The RBI’s income for the year stood at Rs 1.5 lakh crore while expenditure stood at Rs 92,540 crore (inclusive of Rs 73,615 crore towards transfer to a contingency fund). The surplus of Rs 57,128 crore was transferred to the central government.

Compared to this, the central bank had posted income of 1.93 lakh crore and expenditure of Rs 17,045 crore in the year before. But the previous year’s income included a writeback of excess provision from contingency fund amounting to Rs 52,637 crore. 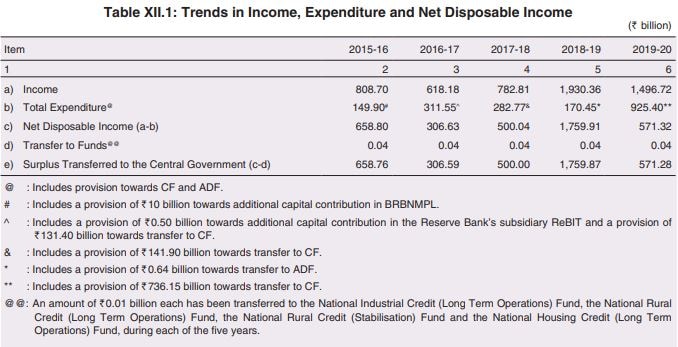