RBI Monetary Policy: Why the central bank chose not to cut rates

Updated : December 05, 2019 03:48 PM IST
RBI’s Monetary Policy Committee kept the repo rate unchanged at 5.15 percent. Consequently, the reverse repo rate held at 4.90 percent. The marginal standing facility rate and the bank rate at 5.40 percent.
The MPC decided to continue with the accommodative stance as long as it is necessary to revive growth, while ensuring that inflation remains within target.
All six members of the MPC surprised economists and market experts when they unanimously voted in favour of holding rates.

The Reserve Bank of India's (RBI) Monetary Policy Committee (MPC) kept the repo rate unchanged in the December policy. With no change this time, the repo rate continues to stand at 5.15 percent. The central bank has maintained its policy stance at “accommodative”, while the reverse repo rate has been maintained at 4.90 percent.

The repo rate is the rate at which the central bank of the country lends funds to the commercial banks. The commercial banks borrow funds only if they witness a shortfall in their funds. The monetary policy committee of a country uses the reverse repo rate as a tool to control the money supply in the country. The repo rate has been cut five times this year, totalling 1.35 percent or 135 basis points.

All six members of the Monetary Policy Committee surprised economists and defied market expectations when they voted in favour of the decision. RBI Governor, Shaktikanta Das explained the decision when asked why there was no cut despite the central bank expecting the inflation trajectory going up to 3.8 to 4 percent by mid-2020.

He said, “It is expected that inflation will come to about 3.8 percent in Q2 of next year but there are several uncertainties and the MPC would like to have greater clarity with regard to that. Let us also keep in mind the fact that inflation targeting price control is the prime objective of RBI monetary policy as prescribed in the RBI Act.

RBI Monetary Policy: Here's what it means for the common man

Das went on to elaborate on these “uncertainties”. He said, “The MPC noted that since its meeting in October 2019, global economic activity has remained subdued, though some signs of resilience are becoming visible. Growth has shown signs of picking up in some advanced economies and emerging market economies. Crude oil prices have moved in a narrow range in both directions reflecting the constantly changing sentiments relating to progress in the US-China trade talks.”

The RBI Governor said that there were some green shoots with regards to growth but a wait and watch approach seemed the need of the hour.

“With regard to growth, we have seen some green shoots. But it’s too premature and early to assume or to take a view on how sustainable they are,” he said. 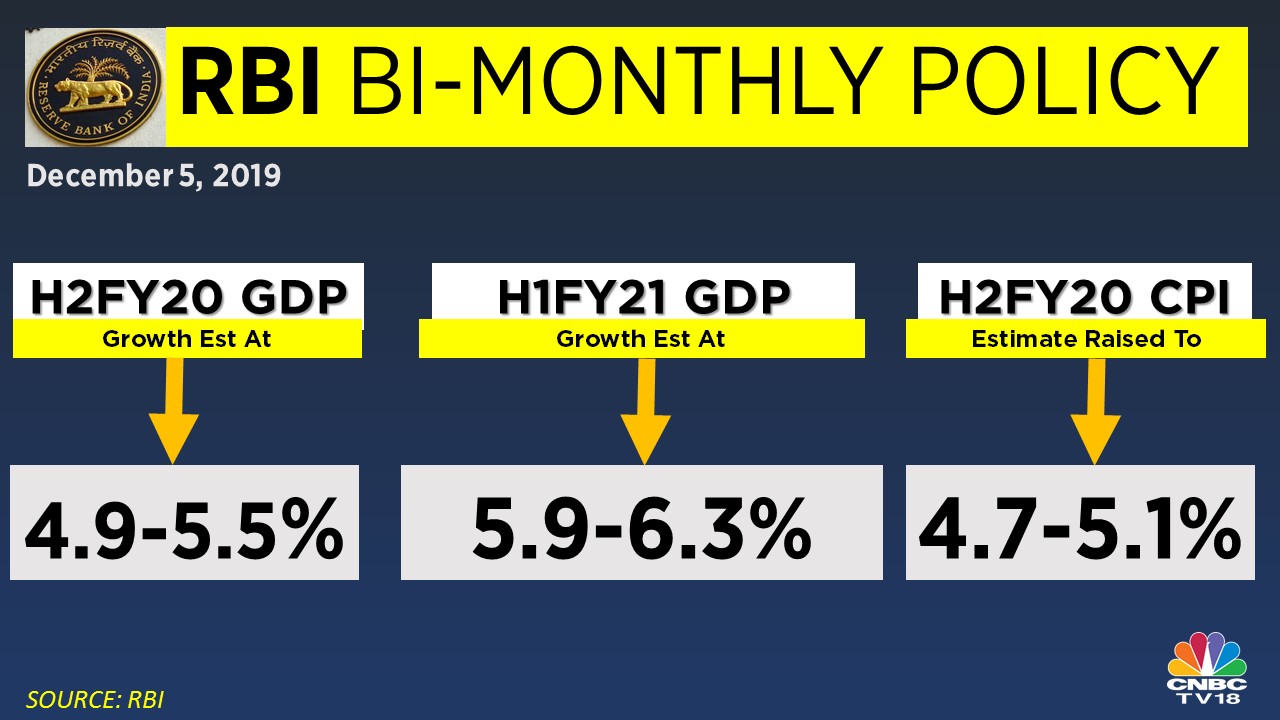 When asked what the MPC will look for in the budget and what it cut rates come February, Das said that he wasn’t worried about the fiscal deficit.

“I am not saying that we are worried but we would just like to have greater clarity with regard to the countercyclical fiscal and other measures, if any, to be announced by the government in the budget,” he explained.

Das also made a point about observing the number of steps taken by the central government to fight slowdown in the recent 3-4 months.

“The corporate tax rates have been cut significantly, and it’s a major development. The government has also taken several measures to ease the problem and to generate demand in the automobile sector. The government has also announced its intention and they are going to set up a last-mile fund for the real estate sector particularly the housing,” said the RBI governor.

The RBI on its part has reduced the policy rates consistently since February 2019. The RBI governor said that liquidity has been in “surplus mode since June” and that banks should be given some time to translate the earlier cuts into their lending rates.

It is also noteworthy here that the RBI on Thursday sharply lowered the growth forecast for the current financial year to 5 percent from the earlier estimate of 6.1 percent on account of weak domestic and external demand.