RBI Monetary Policy Highlights: The Monetary Policy Committee (MPC) of the Reserve Bank kept the repo rate unchanged at 4 percent and maintained an 'accommodative' stance. The RBI MPC began its three-day deliberations on Wednesday. In another major announcement, RBI Governor said that the commercial and co-op banks will not give out dividends this year and retain all the profits.

1. On Tap TLTRO – Extension of Sectors and Synergy with ECLGS 2.0​

*Banks can avail funds from RBI under TLRO to invest in sectors under ECLGS 2.0 * Banks can invest in papers, give loans to stressed sectors covered under ECLGS 2.0  2. Regional Rural Banks permitted to access LAF window, call money market  3.  Commercial & cooperative banks to not make any dividend pay-out from the profits of FY20 4. Different categories of NBFCs to be allowed to declare dividend as per a matrix of parameters 5. Discussion Paper on Scale-based Regulatory Framework for NBFCs by Jan 15, 2021 6.  Risk-Based Internal Audit to be extended to UCBs, NBFCs 7. Harmonisation of guidelines on appointment of statutory auditors for commercial banks, UCBs and NBFCs
Share:

>CPI inflation projection at 6.8% Q3 FY21, and at 5.8% for Q4 FY21 >CPI inflation seen at 5.2 to 4.6% in H1 FY22, with risks broadly balanced Alert: RBI has projected CPI inflation at 6.8% for Q2FY21, 5.4-4.5% in 2H FY21, 4.3% in Q1 FY22 in Oct policy >MPC of view that inflation is likely to remain elevated, barring transient relief in the winter months >Monetary policy constrained at the current juncture from using the space available to act in support of growth >Further efforts necessary to mitigate supply-side driven inflation pressures

>Real GDP growth projection for FY21 revised to -7.5% from -9.5% earlier >GDP growth seen at 0.1% in Q3 FY21 and 0.7% in Q4 FY21 >GDP growth seen at 6.5-21.9% in H1 FY22, with risks broadly balanced >Signs of recovery far from being broadbased; dependent on sustained policy support >Recovery in rural demand expected to strengthen further >Urban demand recovery also gaining momentum >Positive impulses clouded by a possible rise in infections in some parts of the country >Private investment still slack and capacity utilisation has not fully recovered >Prospects have brightened with the progress on the vaccines ​
Share:

“The RBI policy announcement reflects the determination of the central bank to continue with the accommodative policy, with the base rate unchanged at 4 %, while being cautious about the inflationary pressures that are building up. But growth gets the priority once again, with inflation projected to be lower in Q4 and H1 FY22. That all the liquidity measures initiated earlier will continue to be in force, is a consolation, especially in a high inflation scenario. The growth projections too mirror the gradually improving ground conditions, with the overall growth for this year put at -7.50 %, with mildly positive growth for Q3 and Q4. The features and contents of the policy gives the reassurance that lower rates and the plenty in liquidity will continue for a longer time period, till the time inflation rises so much as to derail it.  The policy is supportive of both equity and fixed income markets, with its moderating implications for rates.”
Share:

Shares of interest-rate sensitive sectors- financials, realty and automobiles, were trading higher on Friday after the RBI MPC kept the repo rate unchanged at 4 percent while maintaining the 'accommodative' stance for this year and the next. The overall sentiment was upbeat after the RBI revised FY21 GDP growth to -7.5 percent from -9.5 percent earlier.

The banking and realty indices rose over 1 percent each post the policy decision while the Nifty Fin Services and Nifty Auto indices were also up 0.8 percent and 0.6 percent, respectively. In comparison, the benchmark Nifty also gained 0.6 percent to hit a new all-time high. Among stocks, major banking names like ICICI Bank, Axis Bank, HDFC Bank, Kotak Bank and SBI were all positive, up between half a percent to 2 percent. Most constituents in the auto index also rose post the policy. M&M, Maruti, Bajaj Auto, Tata Motors, and Hero Moto added 0.5-1 percent each. Realty players also cheered the RBI announcements. Omaxe, Godrej Properties, DLF, Sobha, and Sunteck Realty gained 1.7-5 percent.

"RBI maintained status quo in-line with street expectations and GDP numbers too have been revised upwards. Although increasing inflationary tendencies have been acknowledged, little seems to have been done to contain the price index. In Fact it is assumed that CPI will cool down to below 5% in H1 of FY21-22. In all likelihood, inflation isn’t going lower given the massive helicopter money across the world created by central banks and run up in commodity prices such as crude, base metals. It is likely to remain elevated given that import restrictions are in place to support the domestic economy. Such a growth recipe will have unintended consequences of higher inflation not only in India but across the world which will be the bigger animal to tame a few quarters down the line. However, in the near term this will support recovery in financial markets and will keep the bulls charged in the capital markets."

“The RBI announcement comes in on expected lines and signals the revival in the economy. What will be interesting to observe is the net credit outflow that takes place over this quarter. At the same time, RBI has been a bit benign in terms of monitoring inflation indicating  that it could live with some inflationary pressures  in the coming quarters. We expect that this would be its continued stance going into the budget and now hope for a fiscal stimulus in 2021.”
Share:

“RBI policy was on expected lines. They have prioritised growth over inflation. This is an acknowledgment that inflation drivers seem to be more supply side led. An accommodative liquidity stance will ensure access to liquidity will not be a challenge and the ongoing recovery continues to gather steam. This will help push through govt borrowings in a year where the revenues are under pressure. Guidance is better than earlier on growth and flows. Positive for markets.”

"It was in the expected line with the RBI keeping the rates unchanged and continuing with the accommodative stance. The extension of the accommodative stance to the next financial year has cheered the market. However, the fear of a rising inflation rate is evident in the RBI governor's address. The supply-side issues, demand recovery, and inflow of foreign funds could fuel retail inflation"
Share:

The Sensex hit 45,000 for first time ever after RBI upgraded its GDP forecast for FY21 at -7.5 percent vs -9.5 percent projected earlier. The Sensex rose 370 points higher to 45,002 while the Nifty50 index edged higher to its record levels of 13,240, up 107 points. HDFC Bank, SBI and ICICI Bank contributed the most gains along with UltraTech Cement, which rallied over 5.5 percent higher. 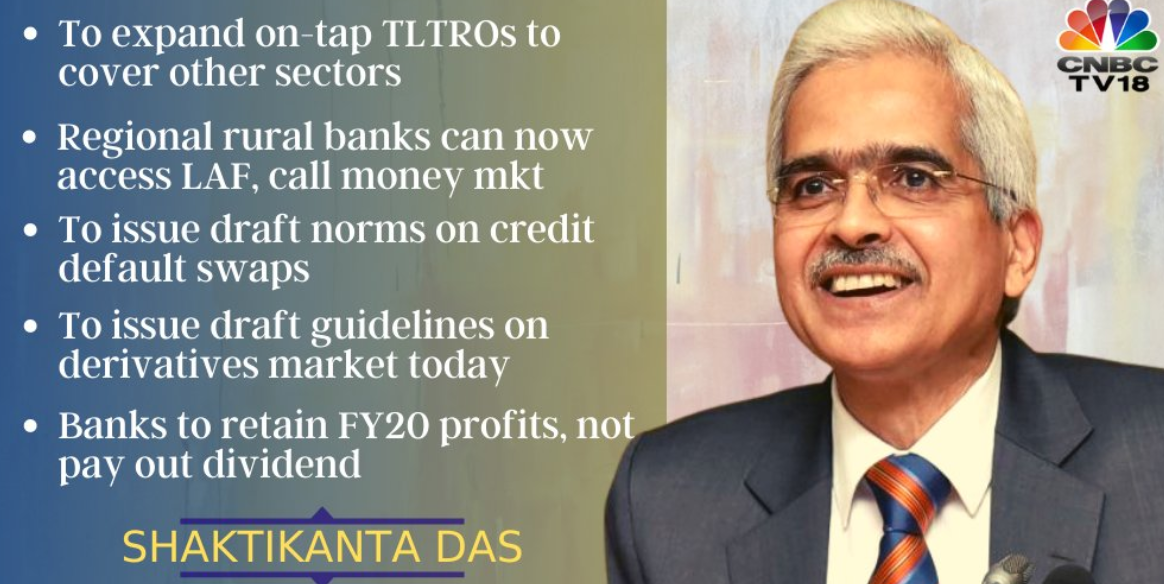 RBI Governor: Will release a discussion paper on scale-based supervisory model for NBFCs  before Jan 15, 2021

Commercial and co-op banks will not give out dividends this year and retain all the profits, the governor said.It added that RBI will introduce risk-based internal audits in large urban co-op banks

Nascent signs of recovery visible in second half of FY21, governor  says

> Will continue to respond to global spillovers with our liquidity management tools > Will use instruments available at appropriate time as needed > Our primary objective is to ensure financial stability is maintained
Share:

> Bond issuances have strengthened for those with strong credit ratings

> MPC of view that inflation is likely to remain elevated

> Outlook for inflation has turned adverse

RBI MAINTAINS ACCOMMODATIVE STANCE FOR THIS YEAR AND NEXT

Watch out for Monetary Policy statement of RBI Governor @DasShaktikanta at 10:00 am today

Indian benchmark equity indices were trading half a percent higher with Nifty above 13,200 level ahead of the fifth bi-monthly monetary policy of the Reserve Bank of India for FY21. The Sensex was trading at 44,888.44, up 255.79 points or 0.57 percent while Nifty gained 67.15 points or 0.51 percent to 13,201.05. Gains in the market were largely led by metals, auto and banking stocks. Analysts expect the Monetary Policy Committee (MPC) of the RBI to hold rates as persistent high inflation and a lower-than-expected contraction of the economy leave no headroom for a rate cut.

An economists' poll shows that a status quo is coming today, on the repo rate front

#RBIPolicy | An economists' poll shows that a status quo is coming today, on the repo rate front pic.twitter.com/epd6nWfJOb

#RBIPolicy | Here's what a CNBC-TV18 economists' poll has to say about the central bank's inflation forecast for the January-March period pic.twitter.com/oV8wDGkYa2

Reserve Bank of India (RBI) Governor Shaktikanta Das last week said that the country’s economy has recovered stronger than expected from the initial impact of the COVID-19 pandemic, but there is a need to be watchful of demand sustainability after the end of festivities. Speaking at the annual day event of Foreign Exchange Dealers’ Association of India (FEDAI), Das said there are downside risks to growth across the world and also in India. After witnessing a sharp contraction in the economy by 23.9 percent in Q1 and a multi-speed normalisation of activity in Q2, the Indian economy has exhibited stronger than expected pick-up in momentum of recovery, Das added. More here