RBI may have to monetise around Rs 7 lakh cr of stimulus package: BofA

RBI may have to monetise around Rs 7 lakh cr of stimulus package: BofA 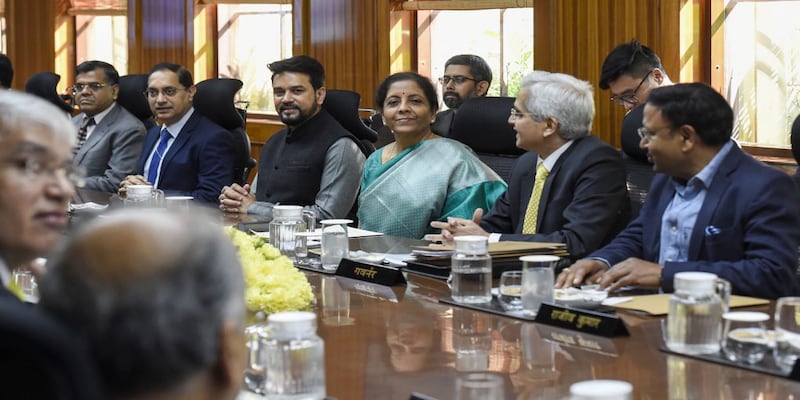 The government may have to ask the RBI to monetise around Rs 6.8 lakh crore of the total economic package announced by Prime Minister Narendra Modi so as to complete the funding under the package, Bank of America Securities (BofA) said in a note on Thursday.

On Tuesday, the Prime Minister announced a Rs 20 lakh crore package to mitigate the hardships inflicted by the COVID-19 pandemic.
"Of the nearly 10 per cent of GDP worth stimulus, 7.3 percentage points of it can be funded through many means. But the balance 2.7 percentage points or Rs 6.8 lakh crore of it will likely need to be monetised by the RBI,” BofA said.
Explaining how BofA expects the government to fund this amount without too badly hurting fiscal balance, its India economists Indranil Sen Gupta and Aastha Gudwani opined that RBI has already funded exactly a quarter (250 basis points) of it through LTROs, TLTROs, the 100 basis points CRR cut, and credit lines.
Welfare measures announced include 80 basis points of GDP with a fiscal impact of only 35 basis points (bps) of GDP.
The government can go for extra borrowings worth Rs 4.2 lakh crore, which will be 110 basis points of GDP .
It can also issue recap bonds to recapitalize its banks or draw from USD 127 billion from RBI''s revaluation reserves. This can work out to be 25-50 bps of GDP, they said.
The government can also issue PSU bonds worth 50 bps of GDP. Credit guarantees offered would work out to be 150-200 bps of GDP for bank loans to SMEs, NBFCs etc; and the remaining 270 bps will likely need to be monetized by the RBI.
It also noted that the Rs 3 lakh crore package announced for MSMEs, power sector and NBFCs, has only Rs 23,200 crore fiscal impact.
They expect the COVID-19 lockdown to be extended till June , and for this reason the economy may contract by 10 bps in 2020-21 as against 1.5 per cent growth projected earlier.
If the lockdown is extended to June, restart will begin only from mid-August, BofA said.
But they have raised the 2021-22 growth target by 50 bps to 8.1 per cent.
“Our projections now factor in lockdown till end-June from end-May earlier. We estimate that a month of lockdown costs about 100 bps of annual GDP. With rising labour dislocations, we expect the restart to stretch to 1.5 months costing about 120 bps of GDP.
“The June quarter growth is set to contract by 12 per cent. If the world economy has to wait for a vaccine for, say, a year, then, India''s GDP can likely contract by 4 per cent,” they said.
In response, the RBI will likely cut the reverse repo rate by 75 bps (from 50 bps) by October earlier, they added.
After the RBI infusion of 250 bps and the previous package of 80 bps along with Wednesday''s 280 bps, there is still a 380 bps of GDP remaining of the 1000 bps of GDP package.
“Looking ahead, we expect the balance 380 bps of GDP to focus on supporting incomes and real estate and incentivizing investment,” they concluded.
Check out our in-depth Market Coverage, Business News & get real-time Stock Market Updates on CNBC-TV18. Also, Watch our channels CNBC-TV18, CNBC Awaaz and CNBC Bajar Live on-the-go!