The Reserve Bank of India (RBI) Monetary Policy Committee has kept its inflation projection for the financial year 2022-23 unchanged at 6.7 percent, governor Shaktikanta Das announced on Wednesday, in line with CNBC-TV18 poll estimates.

India's annual retail inflation eased to a three-month low of 6.77 percent in October, helped by a slower rise in food prices and a higher base effect, which had strengthened bets on smaller rate increases by the RBI going ahead. However, despite some signs of moderation, Das said the main risk was that inflation would remain sticky and elevated. “Risks to growth are evenly balanced... the outlook for imported inflation remains uncertain,” he noted. 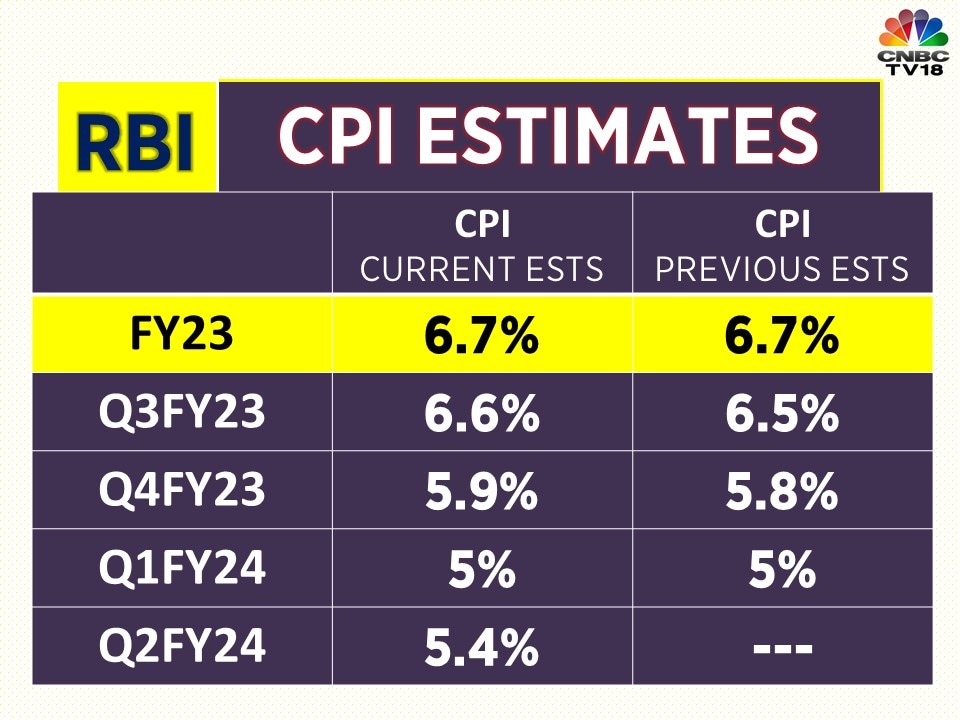 (Inflation is the general increase in the prices of goods and services in an economy. When the general price level rises, each unit of currency buys fewer goods and services, reducing the purchasing power of money.)
Retail inflation has remained above the upper band of six percent for 10 months through October as the Russia-Ukraine war led to supply chain disruption.
RBI’s stance on the consumer price index (CPI) remained unchanged as inflation remains high and broad-based globally, leading to elevated levels in the Indian economy as well as global spillovers continuing to impart uncertainty, Das said.
Also Read: RBI lowers FY23 GDP growth forecast to 6.8% from 7% earlier
He said that inflation continued to evolve along the expected trajectory, with food inflation expected to moderate going forward, even as risk from adverse weather events adds uncertainty to the outlook. Das noted that the pressure points for the economy include cereal, milk and spices prices in the near term.
He also said that the inflation projection is based on the assumption of the average crude oil price at $100 per barrel.
Also Read: RBI MPC decides to hike lending rate by 35 bps in-line with market expectation
RBI governor said the central bank would keep Arjuna’s eye on the evolving inflation dynamics, and its actions will be nimble for the economy's best interest.
“There will be no let up in our efforts to bring down inflation, move closer towards 4 percent target,” he said.
Kaushik Das, Chief Economist at Deutsche Bank, said that if inflation can be handled in the five percent range from April to September, the average comes to 5.2 so five percent for April-June and 5.4 for July-September. “So the average is 5.2, your policy rate is at 6.25, which is 100 basis points higher in positive real rates from a forward looking basis. By February, RBI probably will not do any more rate hikes and 6.25 will be the terminal repo rate but it has kept the option in case it needs to hike the rate by another 25 basis points.”
Amandeep Chopra, Group President & Head-Fixed Income at UTI MF, told CNBC-TV18 that in terms of stance, there is a material change in bringing in core inflation as part of RBI’s stance, because while headline inflation will decline, the trajectory has been more or less tweaked slightly. “But if you really need to anchor household inflationary expectations, core inflation, which is still being forecast to be at around 6 percent over the next 12 months, is a material driver of household inflationary expectations. From that perspective, it would be relevant to now start focusing on that,” he said.
RBI's December meet came after the MPC had to assemble on November 3 out of turn. The additional MPC meeting was held under Section 45ZN of the RBI Act and Regulation 7 of the RBI Monetary Policy Process Regulations. This meeting was called to draft a report to the government to explain why the MPC failed to keep inflation under 6 percent for three quarters.
The September CPI number, announced on October 12, came in at 7.41 percent — the ninth consecutive month of CPI over 6 percent. As per Regulation 7, the RBI sent its explanatory report to the government in a month, i.e. by November 12, but the details were not made public by Das. Since the monetary policy framework came into effect in 2016, this was the first time the RBI had to explain its actions to the government.
Also Read: Home loan EMI may rise as RBI once again hikes repo rate — What should you do now?
Track RBI Monetary Policy announcement LIVE Updates
Check out our in-depth Market Coverage, Business News & get real-time Stock Market Updates on CNBC-TV18. Also, Watch our channels CNBC-TV18, CNBC Awaaz and CNBC Bajar Live on-the-go!
Tags