Updated : October 14, 2019 11:04 PM IST
In 2018 it was floods that devastated Kerala, this year it’s landslips and debris slides, pointing to the need for an effective strategy to reduce damages due to natural disasters.
With the state becoming highly vulnerable, there is a need for people to become climate resilient in all their activities.
Experts are now demanding stringent implementation of the existing environmental laws to prevent largescale destruction in the future

The wounds of the 2018 floods had not fully healed when disaster struck Kerala again in August 2019 in the form of floods, landslips and debris slide.

According to the data available with the government, the floods last year mauled 80 percent of the villages in the state; 433 lives were lost, 15 lakh people were forced to take shelter in relief camps; 15,632 houses were fully damaged and 306,766 partially destroyed, and the total loss for the state was Rs 26,718 crores.

Was Kerala prepared for another disaster after 2018? 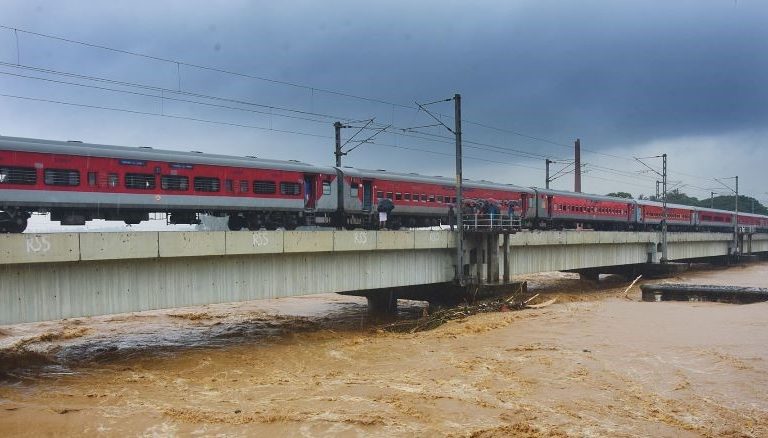 A train passes over the swollen Chaliyar river during the August 2019 floods. Photo by Vinith Shal.

It is yet to be analysed whether the discussions post 2018 floods, on climate change, extreme rainfall and irresponsible human interventions had helped the state to formulate better strategies to deal with natural disasters. Even if strategies had been drawn up, their application at the ground level was not clearly visible when floods struck the state again this year.

Last year, the state’s response with regard to disaster management and relief activities were swift. “The speedy, meticulous and people-oriented handling of the crisis by the state won admiration from all over the state, and from other parts of India and the world,” says a report by the Kerala Planning Commission. Half a million people were rescued, 1.5 million moved to relief camps, and more than 10,000 relief camps were opened immediately.

Officials had claimed that after 2018, Kerala was well equipped to face any disaster any time. In the beginning of 2019 monsoon, Venu V., the chief executive officer of the Rebuild Kerala initiative, who spoke to different regional media, had claimed that after the 2018 floods, the state was prepared to face any natural disaster. He had said that Kerala was well equipped to curtail the damage if extreme rainfall occurred again in 2019.

District officials had been thoroughly briefed much earlier this year on the procedures to be followed and the strategies to be adopted to minimise the impact of any disaster. The Orange Book of disaster management that contains the standard operation procedures and the emergency support function plan were distributed among all the departments and officials concerned to enable them to deal with any kind of natural disasters. According to the Kerala Disaster Management Authority, the Book spells out the roles and responsibilities of each department separately.

Even though step by step procedures to deal with disaster were all set this year, landslips and debris slides were unexpected, and many lives were lost. The most disastrous incidents were in Kavalappara in Malappuram district, and Puthumala in Wayanad district, where several families were buried under the mud in massive landslips. People in Kavalappara recalled that last year authorities had warned them of a possible landslide, however, this time they had no clue. In Malappuram district alone 60 people died, and 11 are still missing.

Proper strategies, need of the hour

The situation in Kerala since the 2018 monsoon has changed drastically. All of a sudden the state has become disaster prone. Other than a disaster management strategy, what plans do we have to reduce damage?

The Kerala State Action Plan on Climate Change (SAPCC), prepared by the Department of Environment and Climate Change (DoECC), was endorsed in 2014 by the Union Ministry of Environment Forest and Climate change (MoEFCC). While states like Odisha have completed the implementation of the first SAPCC and have begun the second one for the next five years, Kerala is yet to start.

“It was mostly the regular activities of the department that had been included in the action plan, instead of formulating plans to adapt to climate change and mitigate the backlash,” said Nirmala Sanu George, who was the Kerala team leader of the Climate Change Innovation Programme (CCIP). She has been working closely with DoECC to build systems for climate change management.

Another unique initiative was giving panchayat-level training in the four hotspot districts to prepare a local action plan on climate change (LAPCC) based on local perspectives, as micro data are not available. “Certain activities are still being carried out with the help of the Kerala Institute of Local Administration (KILA) in different panchayats after the training,” she added.

“Such floods could recur; the state will have to develop more efficient warning and alert systems. Surprisingly, despite there being a set of government-funded scientific institutions, the state does not have proper flood-maps that could have helped in sending more accurate alerts to the people. It is a matter of concern that very little scientific data are being collected on the various phenomena that had occurred during and right after the flood,” he said.

Though the state’s immediate post-disaster intervention was to be appreciated, its preparedness to face another disaster was questionable. The centralised disaster management plans of the state and the lack of long-term plans are areas of concern. K.G. Thara, former head of State Disaster Management Centre, said: “Unfortunately, we concentrate more on post-disaster activities than preparedness. We need a risk and vulnerability mapping at the district level. Maps covering the whole state as a single unit are not useful; the disaster management system should be decentralised. We need expert advisory scientific committee comprising scientists and other experts to deal with disaster. Task forces have to be constituted at the community level rather than depending on individuals.”

She also pointed out that there should be coordination between the departments concerned. “There should be reciprocity among Irrigation Department, Electricity Board, Disaster Management organisations and other scientific communities, something which isn’t there now. The Orange Book is only good for light reading; we have to be more serious about managing disasters,” she said.

Recently, the Chief Minister of Kerala, Pinarayi Vijayan, announced that the state would implement restrictions on constructing buildings or houses in landslide-prone areas. The government has begun a state-wide survey to identify vulnerable and hazardous spots to keep people informed about safe zones where construction activities can be undertaken. The survey will also help to decide which type of agricultural practices and vegetation would be suitable for particular geographical areas.

Had such a survey been undertaken in 2018, it would have helped reduce the impact of the damages that occurred in 2019, experts feel. “There were around 50 teams comprising geologists and soil scientists in the field this time. They studied and surveyed all the areas, and we now have scientific data on places and their vulnerability status. With that we can derive conclusions about how safe or unsafe places are (to live). We could have undertaken these studies in 2018 itself,” S. Sreekumar, geologist and director of the Integrated Rural Technology Centre (IRTC), Palakkad told Mongabay India. A massive landslide at Kavalappara village during the August 2019 floods. Photo by Jinu S. Raj.

Dealing with disaster, a social issue

Social acceptance of a particular strategy is the major challenge a government faces when dealing with environmental issues. People generally consider environmental protection strategies a hindrance to their livelihood, that it may affect their agricultural practices or business. But when a state does not take up the responsibility to implement a proper policy, social acceptance becomes just an excuse.

“People should know whether their land is situated in a hazardous zone. These messages should reach the community as an educational programme. People should fully realise its implications and not misconstrue it. We (IRTC) are planning a people-centered technology that would enable them to measure the intensity of the rain themselves and relocate accordingly,” Sreekumar said.

K.V. Thomas, retired scientist, the National Centre for Earth Science Studies (NCESS), Thiruvananthapuram, pointed out that climate resilient actions within the local communities could be a sustainable solution in the present situation in Kerala.

“The actual message should reach the community in its full sense. Their way of living and agricultural practices should be climate resilient. We should give them a perfect alternative when we ask them not to carry out certain activities,” he said.

Extreme rainfall on account of climate change, unscientific quarrying, irresponsible tourism in the hills, unscientific constructions at the slopes, wrong agricultural practices and many more such reasons contribute to Kerala’s present vulnerability, according to experts.

“The 2018 and 2019 floods in Kerala and other parts of the country educate us on how a climatic phenomenon can spiral into a tremendous environmental disaster. The recurring floods are attributed to the change in pattern and intensity of rainfall, but their effects are amplified by human-induced factors, most importantly the unscientific use of land,” Prof Rajendran said.

“Intense quarrying activities, which include frequent blasts, indirectly destabilize land and weaken the contact zone of rock and soil profile. This can create new pathways for the rainwater to collect and erode the lower part of the soil profile, generating landslides,” he added.

According to Sreekumar, most of the landslide-prone areas are covered with rubber plantations, which is a major issue. “Platforms created in rubber plantations block natural hollows for the flow of water. Blocked water triggers landslips,” he said. “Blasting for quarrying without following the rules is also a contributing factor for debris slides and landslips,” he said, adding that laws to regulate all these were being circumvented. A house destroyed completely in the 2019 floods. Photo by Arun Nilambur.

“In 2018 and 2019, the immediate factor that triggered floods was heavy rains. The affected areas were already vulnerable due to many factors, and unprecedented rains lead to the disaster. This heavy rainfall is a result of climate change,” Sreekumar said.

Apart from strategies to prevent and manage disasters, strengthening rules and regulations can be a solution on a long-term basis.

“There’s need for an action plan to preserve wetlands, ponds, etc. There is a growing tendency not to cultivate paddy fields and gradually fill them up and construct buildings on them. This needs to be stopped through stringent laws,” Rajendran said.

Providing space for rivers and flowing waters would help reduce the intensity of floods. “We have destroyed what used to be the buffers for overflowing streams. There is a need to urgently identify inland channels and interconnected wetlands and other storage areas, clean them up and make them available for any kind of overflow,” he said.

Kerala has got enough laws for protecting its environment, but failure to properly implement them is the issue. “Diluting the laws doesn’t serve any purpose. All our wetland laws, coastal regulation zone laws and mining rules have to be followed strictly,” Prof Sreekumar says.

Thara also raised the need for finding an alternative to crushed rocks in the construction industry. “We have to find an alternative building material. Kerala cannot afford massive quarrying anymore.”