Updated : April 16, 2019 08:11 PM IST
Around half a million birds visit the Ramsar site, Hokersar Wetland and other wetlands in Kashmir. But many of these birds are victims to hunting.
While attempting to study the birds, researchers fear that many of the birds that they had tagged with devices for studying migration patterns, have been hunted down.
While a census is usually conducted, the migration pattern of these birds, which needs meticulous research, technology and resources, has not been studied so far.

Gunshots crack into the air as dusk falls. A young man from Zainakote village in Srinagar district, bumps into two other local youth who are strolling on the eastern shore of Kashmir’s Hokersar bird sanctuary. “The encounter is going on at Hokersar,” he tells them nonchalantly with a wry smile on his face. “Encounter” is a repeatedly used word in Kashmir as for years, the locals have been witnessing and waking up to the news of armed encounters in the conflict-ridden region.

The youth though, is referring to the carnage of birds, indicated by the gunshots that ring out repeatedly from inside the Hokersar sanctuary, where hunters are pulling triggers on the sanctuary’s winged residents.

The young man’s likening of bird-hunting to an [armed] encounter is not surprising in a place like Kashmir, where gun-fights or encounters between militants and government forces are a norm. But he misses the key difference between hunting and [armed] encounters – an encounter usually has two parties exchanging gun-fire. At Hokersar, the birds are at the mercy of the hunters.

Hokersar Wetland, a Ramsar site overlooked by Pir Panjal hills, is located 12 kilometres west of Srinagar city and is surrounded by over half a dozen villages including Zainakote and Haji Bagh. Known as the “queen of Himalayan wetlands” and a paradise for myriad migratory and residential bird species, the wetland hosts a number of waterfowl species which include the greylag goose, mallard, pochard, Eurasian coot, gadwall and more, believed to have come here from Siberia, China, Japan and central Asia. 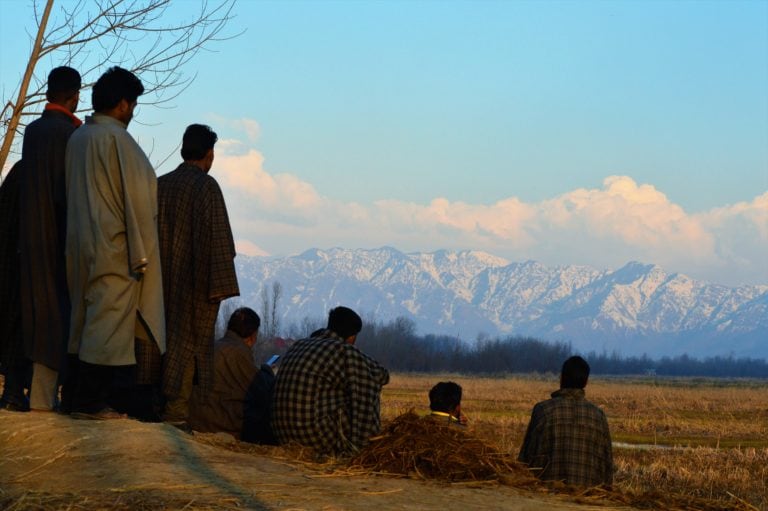 Youth of village Gundesbhat on the shore of Hokersar wetland. Photo by Athar Parvaiz.

On the inner edge of the wetland, there is a watchtower made of wood and concrete. A group of villagers squat on the balcony of the watchtower trying to figure out where the hunters are hiding and then narrate their observations to one another, adding on commentary about whether the gunshots hit the target or not.

“We can tell the difference between a successful shot and a failed attempt by listening to the sound of gunshot carefully,” one of the villagers told Mongabay-India. “But this is unfair. They should not do this. And the government should also not allow to do this. If there is a ban on hunting, how come these people do this? The birds come here from far off places; the poor creatures are our guests,” he said, identifying himself as Maqbool.

Meanwhile, two men on a boat emerge from the cover of dried vegetation and navigate hurriedly inside the wetland. “Look, it seems like one of them has shot down a bird. He is now slaughtering it,” one of the spectators exclaimed.

The villagers said that they hear gunshots almost every day as poachers go hunting for birds across the wetland, claiming lives of thousands of birds. “Mostly they hunt near the margins of the wetland, but sometimes, like today, they come deep inside the lake and shoot down birds wherever they wish,” the villagers said.

Adding on to their allegation, a professional hunter, on the condition of anonymity, told Mongabay-India that hundreds of hunters operate in the area on a rotational basis. “We pool money and bribe the watch and ward staff of wildlife. Each of us contributes upto 1000 rupees for bribing the staff. Nobody stops us after we make them happy,” he claimed.

According to him, while some hunters kill birds for sport, most of the birds which are poached, are sold clandestinely (and openly as well) in some markets for prices ranging from Rs. 700 to over Rs. 1000. Going by his estimate, more than 20,000 birds are killed in Hokarsar wetland alone, each year.

Poaching of wildlife is banned in Jammu & Kashmir.

Another haunt for bird hunters is the Shallabugh wetland, overlooked by Harmukh and Pir Panjal hills, about 35 km north-west of Srinagar in Ganderbal district. This wetland is among the satellite wetlands of Kashmir where an average of half a million birds migrate every winter.

A villager of Shallabugh told Mongabay-India that almost 80 percent of Shallabugh (which has a population of over 2,500) possess hunting rifles and most of them are habitual hunters. Thousands of birds are killed in Shallabugh every year. “Hunters from surrounding villages also come for hunting,” he said.

Kashmir’s Regional Wildlife Warden, Rashid Naqash, when asked about hunting of birds in Hokersar, said that he would inquire from the wildlife staff monitoring the wetland. He denied the allegation that members of the staff are bribed in lieu of their leniency.

Rouf Zargar, the wildlife warden for central Kashmir, was not reachable for comment. An official, however, who spoke on the condition of anonymity, said, “Let me be frank. Hunting does take place in Hokersar and other wetlands, but it doesn’t mean we are in connivance with the hunters.” When hunting disrupts study of birds

In Kashmir, varying figures are given by wildlife officials about the winged visitors to valley’s wetlands from around the world, almost every year. But there is no detailed study on the migration pattern of birds which visit Kashmir annually and go on to other locations as well.

Mustahsan Fazili, a zoologist who teaches at Kashmir University, told Mongabay-India that there is no authentic information available about the migration pattern of the migratory birds which come to Kashmir.

“It is a matter of serious research to study the bird migration especially from different parts of the world. It needs time, resources and technology to study bird migration,” Fazili said.

One such study was initiated in the winter of 2017. The Sher-e-Kashmir University of Agricultural Sciences and Technology (SKUAST) initiated an important research project for studying the migration pattern of birds which visit the wetlands of Kashmir every winter. According to the principal investigator of the project, Khursheed Ahmad, it is a pioneering study aimed mainly at an assessment of movement patterns of 12 migratory waterfowl species, especially ducks, geese and swans.

Ahmad and his team began the study in January 2017 by ringing 200 birds and followed it up in February 2018 with tagging five birds with satellite transmitters or PTT (Platform Transmitter Terminal). The birds, which were ringed and tagged with PTT included mallard, shoveler, grey legged geese, gadwall and common tail.

However, within a few months, the research team stopped receiving signals from birds fitted with PTT. Ahmad and his colleagues assume that the birds have been killed by poachers, given the rampant poaching of birds in the region. As per estimates of Kashmir’s wildlife department, around half a million birds visit Kashmir annually. Photo by Athar Parvaiz.

He said that “we have to apply for more funds” for getting more PTTs as each unit costs up to half a million rupees.

“We are studying the migratory routes and the geographical spread of the migratory waterfowl that visit Kashmir during winters and timings of their to and fro migration,” Ahmad told Mongabay-India.

Their goals, Ahmad elaborated, include identifying home range size and movements of waterfowl between satellite wetlands of Kashmir in different time hours during winters and the habitat use of breeding and non-breeding species in different seasons.

“Another important goal was to identify threats to the waterfowl and their habitats and information on the outbreak of avian influenza,” the scientist said.