Five southern states— Karnataka, Tamil Nadu, Kerala, Andhra Pradesh, and Telangana have all claimed that almost all eligible beneficiaries have already been enrolled in the scheme.

Basing the estimate on the 2015-16 Agri Census, a total of 14.5 crore farmer families were initially aimed to be added to the scheme that provides Rs 6000 cash assistance in three installments to each farmer family. Currently, 61 percent have been enrolled. And if the trends continue, government officials estimate that PM-KISAN beneficiaries list may be restricted to 11-12 crore farmer families, against the 14.5 crores estimated earlier. Government sources say southern states have stopped adding beneficiary data to the PM KISAN portal. However, none of them have even crossed the 60 percent of the 2015-16 Agri Census estimates. Karnataka, for instance, has only enrolled nearly 50 lakh farmer families as against the estimate of 86.8 lakh – a 57 percent progress.

Tamil Nadu and Kerala have also claimed saturation. Of the 80 lakh estimated farmers in Tamil Nadu, only 46 percent have been enrolled. Kerala with 28 lakh farmers enrolled has just reached 37 percent.

Telangana has touched 60 percent with 35 lakhs farmer families enrolled. In fact, Telangana has a similar farmer benefit scheme ongoing at the state level and has the agricultural land records digitized. They have claimed saturation too. 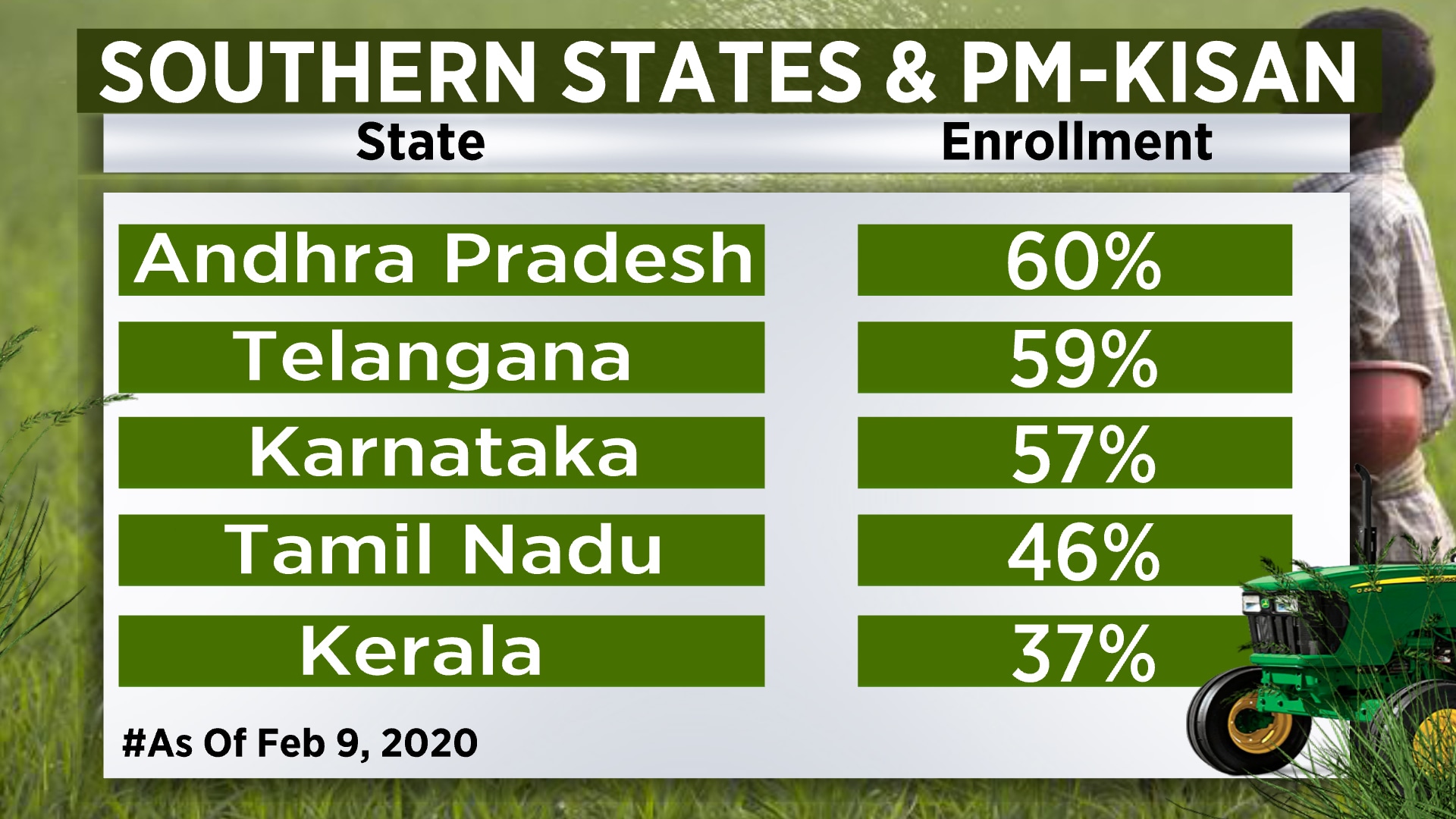 Vivek Agarwal, Joint Secretary & CEO – PM KISAN said, “All southern states have claimed saturation. They have gone through their land records and even done village level drives to include more eligible beneficiaries. We have also opened the self-registration process through the app so that any farmer who is left out can apply directly. But even in that southern states have not seen much success.”

Government officials say that even the self-registration provision under the Uzhavan app has also led to just a few thousand beneficiaries being added incrementally. In Tamil Nadu, 1.7 lakh registered through the app, but in states like Karnataka only around 12,000 farmers came up.

Haryana, Gujarat, Himachal Pradesh, Uttrakhand, and Jammu & Kashmir have also claimed saturation in adding more farmer-beneficiaries. But the stark difference is visible when we compare the enrollment statistics.

Except for J&K, almost all northern states that have claimed saturation have crossed 80-85 percent enrollment as against Agri Census data. Differences in land record systems in various states could be a reason for the discrepancy. Tamil Nadu for one has taken census 2012-13 as its benchmark as it recorded a number of farmer families and not operational holdings. The reason why there is a difference in the assessment on actual no of beneficiaries for the PM KISAN scheme.

Contrast is also seen with states like Punjab and Assam that have in fact enrolled more beneficiaries versus the Agri Census estimate. Punjab has almost double the number of farmer-beneficiaries with over 22 lakh farmers enrolled. Providing an explanation to the stark difference between southern and northern states’ enrollment statistics versus Agri Census Agarwal said every state has had a different way to recond landholdings. “Kerala state’s explanation is that many landowners are NRIs and hence not eligible for PM KISAN. Alternatively, there have been many mutations and land holdings have been split in Punjab in the last 5 years and the reason why almost double the number of farmer families have been enrolled as compared to Agri Census 2015-16.”

“We did not have any credible farmer data and hence we had started out with Agri-Census 2015-16 that records operational holdings. The estimate was one landholding will correspond to one farmer's family. But clearly that has not happened. So we are toning down our estimates on total farmer families to 11 to 12 crore,” he added.

Other larger agricultural states like Bihar and Madhya Pradesh have been slow in adding beneficiaries and the hope is that these states will pick up the pace. Government officials indicate that Bihar particularly has been slow as their methodology of adding farmers has been different. “Bihar is asking applications from farmers, verifying it at their end and then submitting it to us and that is delaying the process. We have asked them to expedite the process by submitting applications on the portal and then progressing with verifications,” Agarwal said.

Point to note is that West Bengal, with an estimated 70 lakh farm holdings, has still not participated in the scheme. However, almost 7 lakh farmers had applied directly to the PM KISAN scheme through the app. However, cash benefits cannot be doled out to them as the state is not onboard.

“Even if West Bengal joins the scheme, we will not cross 12 crore, farmer families,” said Agarwal.
Tags Agri Census PM-KISAN