Ping! Elephants ahead: reducing human-elephant conflict, one SMS at a time

Updated : March 07, 2019 06:51 AM IST
Hassan has been a hotbed of human-elephant encounters for years and a challenge for forest authorities, who have been translocating crop-raiding elephants for decades.
An integrated warning system has been replicated from a similar one in the elephant corridors of Tamil Nadu’s Valparai region.
Fatalities from elephant-human conflict have reduced to nearly zero in the region.

In India, few animals carry the kind of cultural symbolism like elephants do. Human-elephant interaction boasts a rich history dating back centuries. It is but natural that such a long association would also have encounters that do not end happily.

Nowhere is this more apparent than in Hassan in Karnataka, the state which is home to India’s largest population of Asian elephants. The Hassan region, however, has been beset by human-elephant conflicts for years with a number of these encounters resulting in fatalities. But, thanks to resilient conservation efforts and smart application of technology in recent months, Hassan could soon be at peace with its elephants.

A recent scientific study, published in Tropical Conservation Science in December 2018, on 205 hamlets around Hassan found a peculiar pattern in elephant movement between 2015 and 2017. The paper observed that although the elephants’ numbers were equally distributed between northern and southern areas during their first year (2015-16), their movement was restricted in the second year of study (2016-17).

“Large-scale felling of trees in about 350 hectares of abandoned coffee estates in the central region of the study area and installation of solar fences around these areas restricted movement of elephants toward villages in northern part,” write the authors in the paper.

The barriers have significantly increased human-elephant conflicts as they forced elephants into roads or human settlements.

Jumbos on the move

Authorities and environmentalists had attempted other methods in Hassan from translocating rouge elephants to other areas and building fences, but without any improvement in the situation. Over the years, no less than 100 pachyderms have been captured and moved to other locations but the elephants kept returning. Foresters moved 22 elephants in 2014 alone, but they all made it back to the Hassan area within a short period of time.

At any given point, more than 60 elephants of three different herds roam the Hassan neighbourhood, making encounters with humans inevitable. Elephants use free-flowing travel routes and not strict, narrow areas, said Ananda Kumar, a scientist with the Mysuru-based Nature Conservation Foundation and one of the authors of the study, in an interview with Mongabay-India. For instance, elephants from Hassan could potentially mingle and breed with elephants from Nagarhole National Park and even far-off Coorg.

Also, they show a ‘rotating migration pattern’, he explained. When a herd of elephants is translocated away from the area – like when forest officials moved 22 elephants in 2014 – the herds were shortly replaced by another herd which migrated from farther areas. 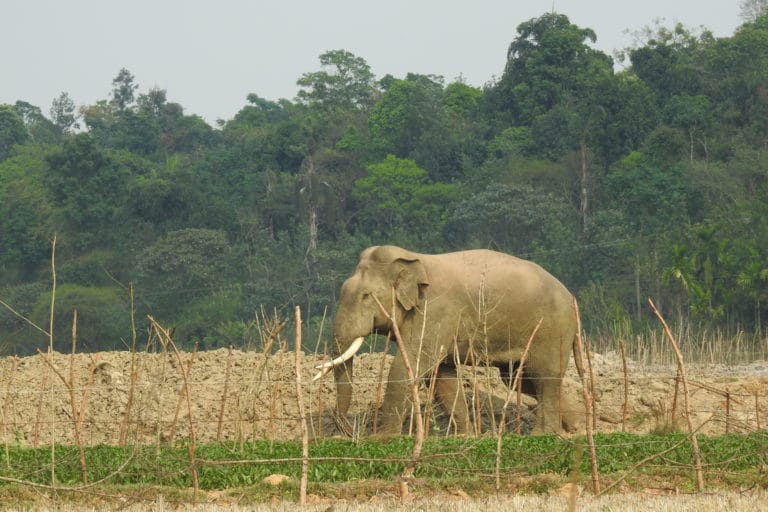 An elephant walking next to a farm in Hassan, Karnataka. Encounters between humans and elephants were increasing and about 5 people died each year due to conflicts, between 2010 and 2016. Photo by Ashwin Bhat.

Encounters of the Unfortunate Kind

A vast majority of elephant-provoked human casualties in Hassan territories – just like in many other elephant corridors in southern India – have been accidental encounters when victims were caught unaware of the animal’s presence in close proximity. Most elephant confrontations occur during the 6-10 AM and 4-8 PM time periods – when workers in coffee plantation and paddy fields are mobile. On an average, elephant-related incidents killed five people every year between 2010 and 2016 in districts surrounding Hassan.

In October 2017, forest authorities introduced a combined early-warning system of SMS alerts, automated voice calls and LED flash-lights at vital public places across the Hassan region. Forest authorities registered over 35,000 mobile numbers for the pre-warning SMS alert system, apart from several local WhatsApp groups. The alerts, in the local language, Kannada, are routinely sent in the mornings and evenings about the possible location of the jumbos, in addition to the warnings on unanticipated elephant presence. Additionally, up to 30 digital display boards in sensitive public junctions caution commuters of the movement of elephants.

The integrated system, which was a result of coordinated efforts by conservationists, government officials and the local community, aims to give just enough information without causing panic or inadvertently helping poachers with details like the strength of the elephant herd or its exact location.

Thanks to the endeavour, fatalities from elephant-human encounters have now been brought down to nearly zero, barring one or two events. A digital display board in Hassan which alerts people about the presence of elephants in the area. Photo by Ananda Kumar, NCF.
The story was originally published in Mongabay-India.
Tags Elephants human-elephant conflict sms UNESCO Western Ghats