Updated : June 13, 2019 11:49 PM IST
India has been actively pursuing the proposed 5,040-megawatt Pancheshwar dam project on the India-Nepal border despite objections to the large-scale project in the geologically sensitive Himalayan area.
A latest study published by a team of Indian researchers has cautioned that if executed in its present format, the project would face a serious risk from seismic activity and sediment mobilisation.
The researchers also note that the project will be vulnerable to extreme weather events and shrinking glaciers in the Himalayan region.

As India pursues the development of the 5,040-megawatt Pancheshwar dam on the India-Nepal border, a new study has warned that if executed in its current form, the proposed dam is vulnerable to earthquakes in the region, among other geological threats.

The Indian government is actively working with Nepal on the proposed transboundary Pancheshwar Multipurpose Project (PMP), a hydropower project which includes a proposed 315-metre dam, located on the Mahakali river (Sarada river in India). Researchers, however, have noted concerns about the safety and sustainability of the dam in its current form, “due to seismicity, reservoir-induced seismicity, slope instability reservoir draw down effect and unpredictable large volume sediment mobilisation from paraglacial zones.”

The researchers, who represent different government organisations from across India, conducted the study to assess the likely environmental consequences of the Pancheshwar project in the ecologically and geologically sensitive Himalayan region of Uttarakhand, where it is located.

The study, published in the journal Current Science in May 2019, also incorporated field observations on the impact of the Tehri dam project, constructed two decades ago on the Bhagirathi river in Uttarakhand. Once completed, the Pancheshwar dam is expected to be among the highest in the world.

The analysis noted that there have been several doubts regarding the project’s impact on the “terrain and its ecosystem besides concerns on the disruption of the socio-economic conditions of the people living in Pithoragarh and Champawat districts of Uttarakhand.”

The project area of the study lies in zone IV of seismic zone map of India where various (geological) faults around the proposed site are suggested to be currently active and therefore highlights the increased vulnerability of the site to seismic hazards.

During the last 100 years, earthquakes of magnitude higher than 7.5 on the Richter scale have jolted Assam (1950), Bihar (1934) and Kangra (1905), but Uttarakhand’s Himalayan region is yet to face an earthquake of such magnitude, noted the study. This places Uttarakhand in the Central Himalayan ‘seismic gap’ zone.

“The probability of a high magnitude earthquake in the gap areas is high, yet the precise timing of the earthquake cannot be predicted accurately,” notes the study.

It highlighted that according to the Pancheshwar dam’s pre-feasibility report, a potentially active Rangunkhola Fault capable of generating an earthquake of 7.4 magnitude traverses the dam site in Nepal Himalaya.

“The Pancheshwar project area lies in Zone IV as per the seismic map of India and is traversed by active faults. It is also highlighted in the pre-feasibility report, 2015. Also, the project area lies in the central seismic gap awaiting a major earthquake,” said the study’s lead author Shubhra Sharma, who is from the department of earth and environmental science, Indian Institute of Science Education and Research (IISER), Mohali.

“In addition to this, recent studies around Tehri dam have shown how seasonal loading and unloading of reservoir alters local hydrological conditions leading to deformation of the earth surface (anthropogenically or reservoir-induced seismicity). Further, the fluctuating water levels of the reservoir destabilise the surrounding slopes causing landslides/subsidence or fissuring, which is amply demonstrated around Tehri reservoir”, she added. The Pancheshwar temple is close to the proposed project site. Photo courtesy of Shubhra Sharma.

Raising concerns about the stability of slopes surrounding the dam reservoir, the study said, when the “terrain stability around the Tehri dam could not be protected, how to ensure that this would not happen in a much bigger reservoir of Pancheshwar dam?”

Tehri dam is another controversial project in Uttarakhand where the site was also considered to be in an active seismic zone and constructed several environmental concerns were raised about its disastrous impacts before it was constructed.

“In the pre-feasibility study, besides the geological aspects, there should have been detailed deliberations on the status of the valley slopes along all the four river valleys that are going to be inundated. This is critically significant for the safety, security and ecological and economic sustainability of the people who are technically not displaced but bear the brunt of the project … Therefore, it is pertinent to have a detailed geomorphic status of the valley slopes that are going to submerge,” said the study.

Such an analysis would help the dam authority initiate slope treatment measures well in advance to avoid any collateral damage after the filling of the reservoir, and thus a situation like Tehri dam can be averted.

The study pointed out that in the case of Tehri dam, many villages living at higher elevation have not been compensated for the collateral damage.

It further said that considering that the extreme hydrological events are likely to increase in future due to the increase in global temperature, it is important to study in detail the “dynamics of the glacial fed Himalayan rivers for their carrying capacity (both in terms of water discharge and sediment load).”

The study stressed that the frequency of extreme precipitation events in the Himalayan region is increasing and plays an important role in the overall sediment transport. The flash flood of June 2013 in Uttarakhand is the most recent example of such an event that led to large-scale sediment mobilisation and aggradation in the lower valleys.

“Therefore, it is only logical to argue that the proposed Pancheshwar project must be reviewed incorporating these pertinent observations and execution must be planned with the utmost caution,” the study warned. 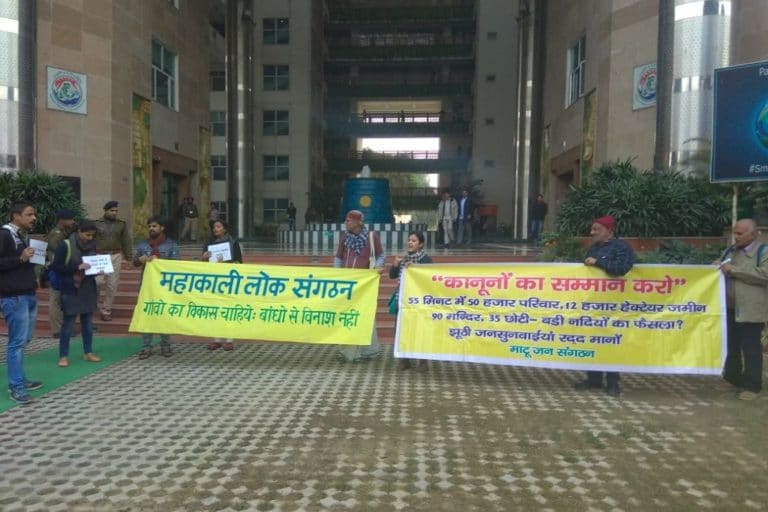 The proposed site of the project falls in a geologically sensitive region of the Himalayas. Photo courtesy of SANDRP.

Sharma also highlighted that the Mahakali river, on which the project is proposed, and its major tributaries like Dhauli Ganga and Gori Ganga drain through areas vacated by past glaciers. “These receded glaciers have left behind enormous volumes of glacial/slope sediments. We have already witnessed as to how the extreme events like the 2013 floods in Uttarakhand mobilised this sediment and clogged the river channels,” she said.

“A study from Satluj river estimated that Parecchu lake outburst flood of 2005 mobilised approximately 41 percent of the total annual sediment yield during this event. If we are to ensure that the project is environmentally sustainable and economically viable, such estimates need to be incorporated in the sedimentation rate, which at present is very conservative,” Sharma explained to Mongabay-India.

“The project also needs to assess the impact of shrinking glaciers on discharge, considering the fact that the major rivers involved (except monsoon fed Saryu) depend on the glaciers for their annual recharge,” she added.

The study acknowledged that “we are yet to develop a reasonable understanding of the behaviour of the Himalayan cryosphere in response to climate variability and changing precipitation trends,” and called for a complete re-evaluation of the methodology employed for assessing hydropower potentials of the glacial and snow-fed Himalayan rivers.

“This is important considering the fact that majority of the hydropower projects are planned in higher Himalaya, implying that these would be sustaining largely on the meltwater discharge with subordinate contribution from India’s summer monsoon. This is also true for the Pancheshwar dam project,” the study said.

Recent studies from the Himalayan region indicate that the majority of the glaciers have retreated and lost ice mass since the mid-19th century. “As a consequence, the meltwater contribution into rivers would be adversely impacted, which if, not accounted for, will lead to under-performance of the hydropower project. Also, it is feared that such projects are likely to impact the aquatic biodiversity in the downstream of barrages/dams due to reduced environmental flow,” the study cautioned.

U.P. Singh, who is the secretary of the Indian government’s Ministry of Jal Shakti, told Mongabay-India that he had a meeting with officials of the Nepal government on Pancheshwar Dam in May 2019.

“People are being misled. No proper study has been conducted for this project. The detailed project report for the Pancheshwar dam is full of loopholes and even the environmental impact study has not factored in a lot of ill impacts of the project. I don’t understand why is this project being rushed. Why are we still looking at such large dams that too in geologically sensitive Himalayan region?” Bhim Singh Rawat of the South Asia Network on Dams, Rivers, and People (SANDRP) told Mongabay-India. SANDRP is a network of organisations and individuals working on issues related to the water sector, specifically associated with large dams.