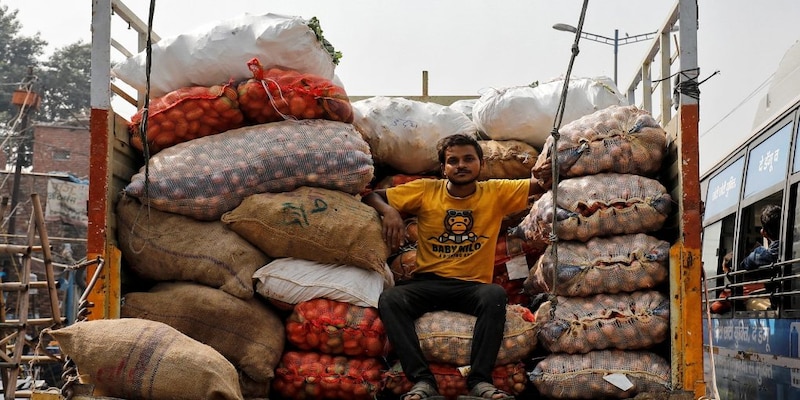 Onion farmers in Maharashtra are protesting against the government's decision earlier this week to ban exports of all varieties of onions with immediate effect.

Onion prices have surged in the past month asf heavy rains in Karnataka damaged a substantial amount of standing crop as well as stored crop in Madhya Pradesh, Gujarat and Maharashtra. Strong demand for Indian onion in international markets has further stoked the price rise.
Farmers in Nashik have taken to the streets, and there are reports of the Mumbai-Agra highway being blocked by agitating farmers. Trading in onions at Nashik, Asia’s largest onion trading market has come to a standstill, with farmers and traders calling for a rollback of the export ban.
Onion producers in Maharashtra had approached Nationalist Congress Party chief Sharad Pawar, who in turn has urged the Central government to reconsider its decision on the ban.
The ban comes amid the Essential Commodities (Amendment) Bill 2020 being passed in the Lok Sabha. The Bill will be tabled in the Rajya Sabha for approval.
The Bill aims to curb fears among private investors of excessive government intervention in the farm business. The Bill seeks to give freedom to produce, hold, move, distribute, and supply deregulated commodities like cereals, pulses, onion, potato, edible oil. The government will only intervene if there is an exceptional rise in prices due to factors like natural calamities and war.
While onion prices have risen of late, market watchers say that at Rs 35/kg, the prices are much lower than those seen last year when onions were selling at Rs 100/kg in the retail market. The government then had banned onion exports for nearly six months from September 2019 to March 2020.
This time the government has made it clear that it will intervene in advance and not wait for the situation to get out of hand. Already, it is considering a three-pronged strategy to keep onion prices in check.
Since the ban earlier this week, onion prices have come off. But farmers are accusing the government of double standards as they feel that on one hand, the government has amended the Essential Commodities Act and also talking about improving returns for farmers, and on the other hand, imposing an export ban which hurts farmers the most.
Senior Finance Ministry officials are of the view that that onion exporters should not suffer as it would impact India’s share in exports. Also, the government has been pitching for increasing agri-exports as part of its overall strategy to boost exports.
Though the export ban was exercised as an urgent step, sources said the Department of Economic Affairs under the Finance Ministry is in favour of the curbs being relaxed to give relief to exporters.
Check out our in-depth Market Coverage, Business News & get real-time Stock Market Updates on CNBC-TV18. Also, Watch our channels CNBC-TV18, CNBC Awaaz and CNBC Bajar Live on-the-go!