Updated : May 30, 2019 08:37 AM IST
The Bonda people, living in hilltop villages on the Kondakamberu mountain range in Odisha, are one of the 13 Particularly Vulnerable Tribal Groups (PVTGs) in the state.
Rising temperatures and deforestation, along with poor development and insurgency by radical groups, have impacted the traditional practices and lifestyle of the Bonda tribal community.
Community members are abandoning their ancestral villages and migrating in search of a livelihood.

The Bonda people, scattered across 32 remote hilltop villages on the Kondakamberu mountain range of the Eastern Ghats in the Malkangiri district of Odisha, are one of the 13 particularly vulnerable tribal groups (PVTGs) in Odisha. They are believed to be part of the first wave of migration out of Africa about 60,000 years ago. They were the first forest settlers in India. As per the 2011 census, the population of the Bonda community was 12,231 in which females outnumbered the males.

But over the past few years, this group has been impacted by climate change, changing agricultural and hunting practices, rising temperature and water scarcity across the Bonda hills. 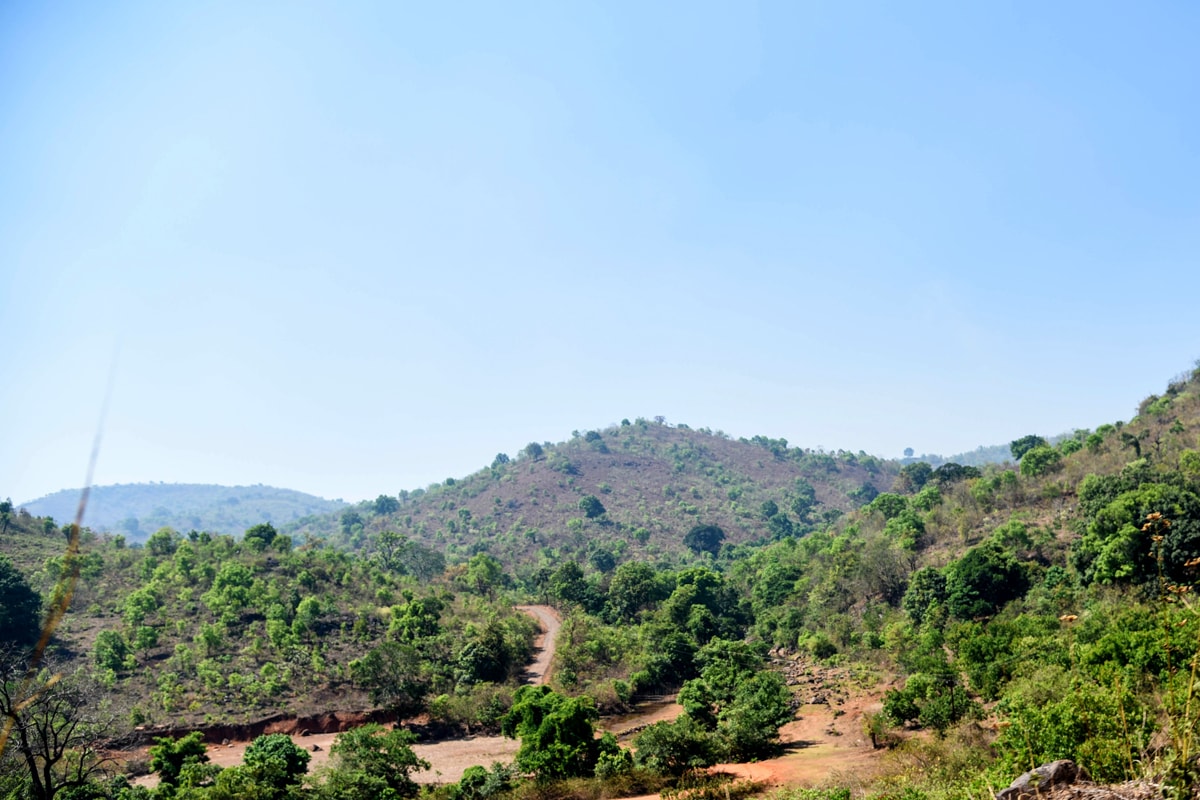 As you enter through Khairput roughly 60 kms from Malkangiri district, multiple footpaths leading towards Bonda villages with thatch and clay tile huts. The Bonda hills have their dwellers at various heights, and those residing near the foothill region are known as the Lower Bondas who are relatively more mainstreamed than their counterparts in the upper regions. The Upper Bondas are more disadvantaged. The Bondas maintain their traditional customs and their language, Remo, though many are getting familiar with Odia as well.

Tangible development still eludes the tribe, though the government claims that huge sums of money have been spent for the socio-economic uplift of the community. Sambari Kirshani, a member of the Bonda tribe from the Mudulipada village of Odisha, has to walk a long distance downhill to get to the nearest Chuyanh (small stream). If she does not, she and her family will have to go without water. So is the case with Budai Dora and Gurbani Kirshani. For these Bonda women, these streams located far from their habitat flowing down the Bonda hill, are the only sources of drinking water in the area. But what has made their problem even more severe is the rising temperature. With the heat at its peak and water sources drying up fast, almost all villages located on the hill-top are facing acute water shortage. According to a local person at Mudulipada, who wished to remain anonymous, among the 30 tube wells dug by the Rural Water Supply and Sanitation (RWSS) department and two piped water projects undertaken by the Odisha Tribal Empowerment and Livelihood Project in the Bonda hills, most are lying defunct due to non-maintenance and few have been left incomplete.

Additionally, an open well, fitted with a pump, in Mudulipada has been destroyed in an attack by the Naxal radical group, three years ago. The region, located on the tri-junction of Odisha, Andhra Pradesh and Chhattisgarh states, has always been vulnerable to Naxal insurgency. A defunct water tank at Mudulipada which was attacked by Naxals in 2016. Photo by Tanmoy Bhaduri.

Depleting forest cover has affected the self-sufficient life in the Bonda hills. The community’s dependence on the land has become negligible. Bondas now practice Dongar Chas (shifting cultivation) in the hills but due to acute water shortage, they cannot produce much of the agricultural products. “As productivity is very less we have to buy vegetables, cereals, rice and millets from the nearest market which is about 27 km from here,” said Buda Dara Majhi, a villager of Dantipada. The locals also have cover a longer distance than earlier, when the dense forest was near their village, to collect firewood and graze cattle.

Salap and Mahua trees have importance in the Bonda culture as traditional wine is made from the flowers of these trees. With high temperatures in the summers, the Salap tree now dries up and Mahua becomes scarce and the Bondas have turned to make liquor from millets. 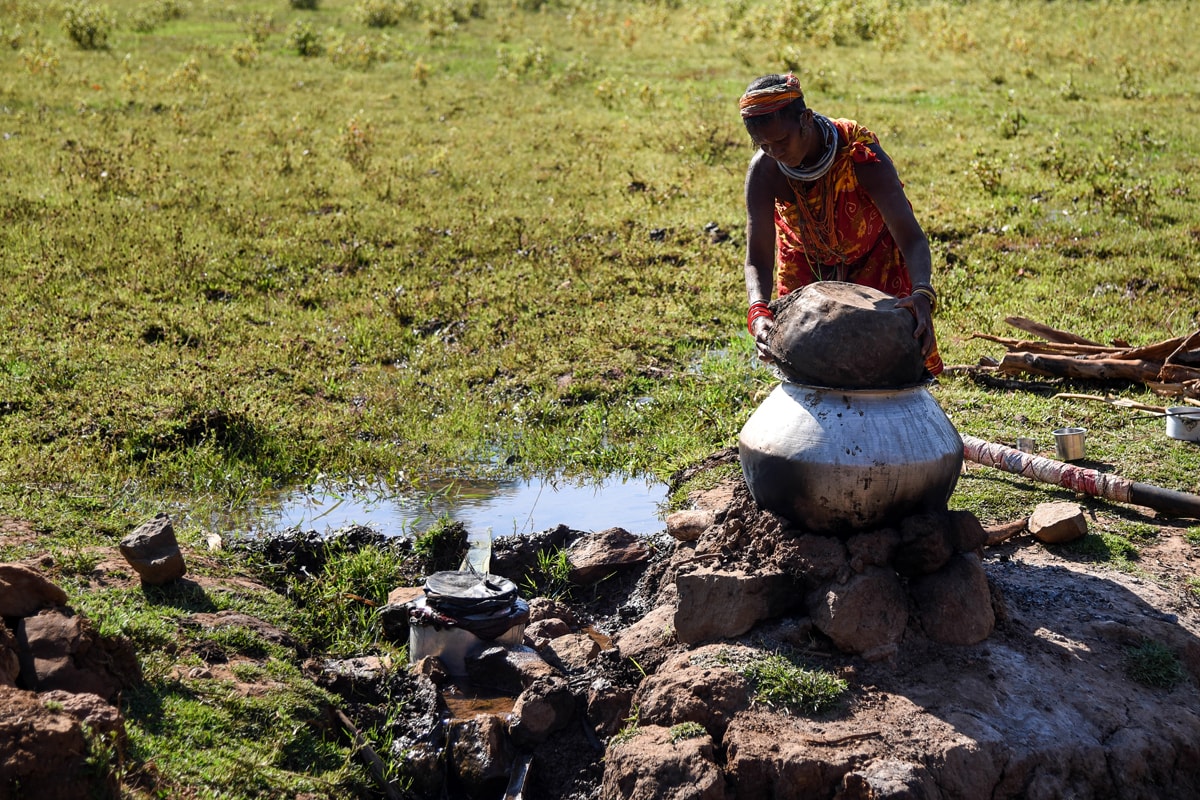 Over the last decades, few Bonda men migrated to nearby towns to earn a livelihood, but now women too have started abandoning their ancestral villages as well. “Our daughters have gone to Andhra Pradesh and nearby towns like Jeypore, Koraput to work in hotels,” Jashna Rani Majhi, head of the panchayat of Mudulipada, told Mongabay-India. Youth are migrating for work as the community is no longer able to meet its needs from the forest, she added. 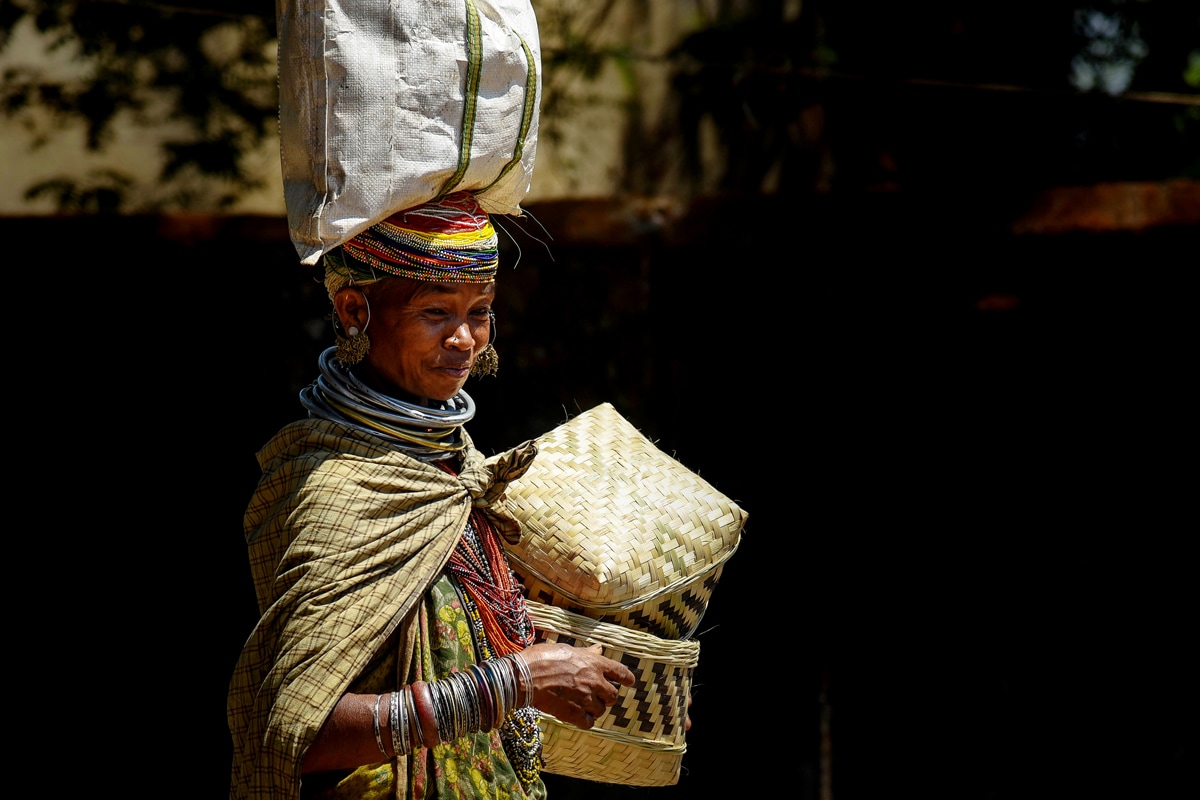 A Bonda woman on her way to sell handmade baskets in a local market at Khairput. Photo by Tanmoy Bhaduri.

The Bonda Development Agency (BDA) was set up in 1977 by the Odisha government for the development of the community. However, development activities are still to see progress in the region. There is only one Primary Health Centre (PHC) in the upper hills at Mudulipada, which is run by an NGO headed by a doctor from the Ministry of Ayurveda, Yoga and Naturopathy, Unani, Siddha and Homoeopathy (AYUSH), Parfulla Kumar Parida. He said that Bondas are mostly suffering from diarrhoea, malaria and tuberculosis and diarrhoea cases are common because the drinking water from Chuyanh is often contaminated with bacteria and heavy metals. 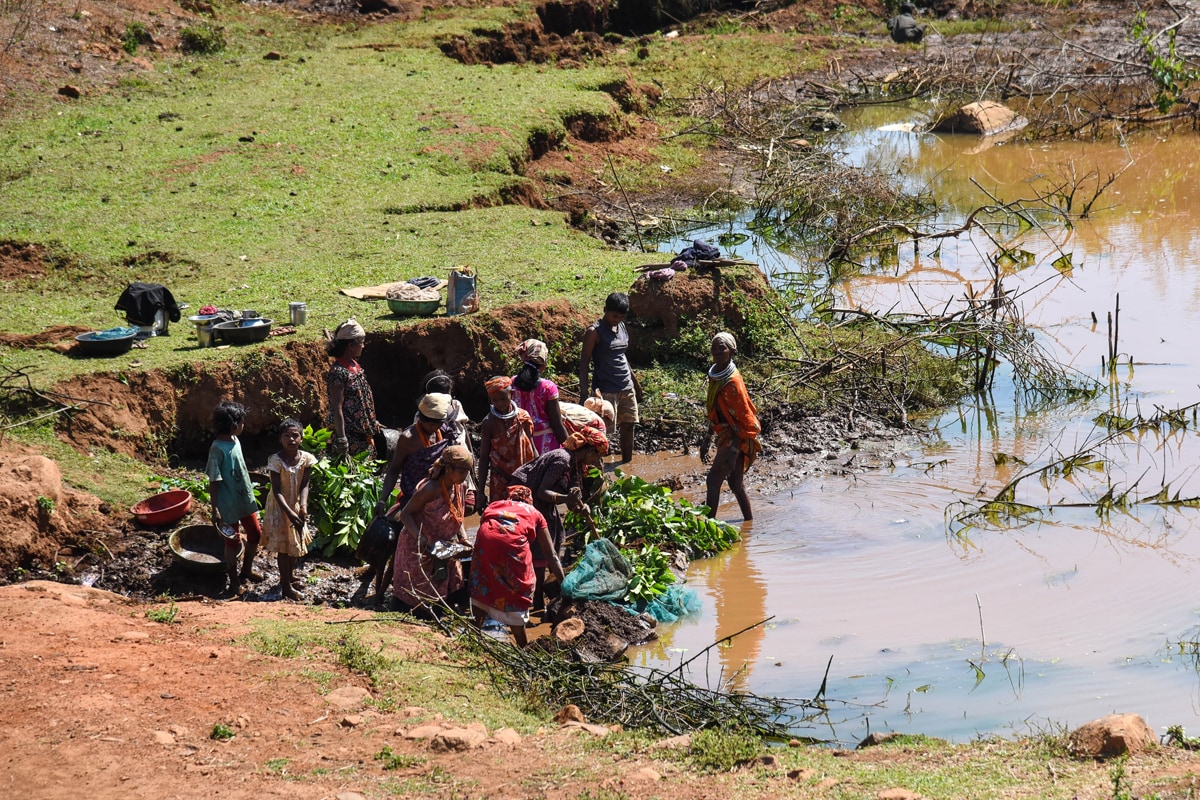 However, a BDA official Dipak Maharam claimed, “We have improved the drinking water management at Bonda hills but the drinking water crisis has been the worst in summer. We have already started restoring tribal traditions like kitchen gardens managed by Bonda women at each household to supplement their daily needs and livelihood development training for youth.” 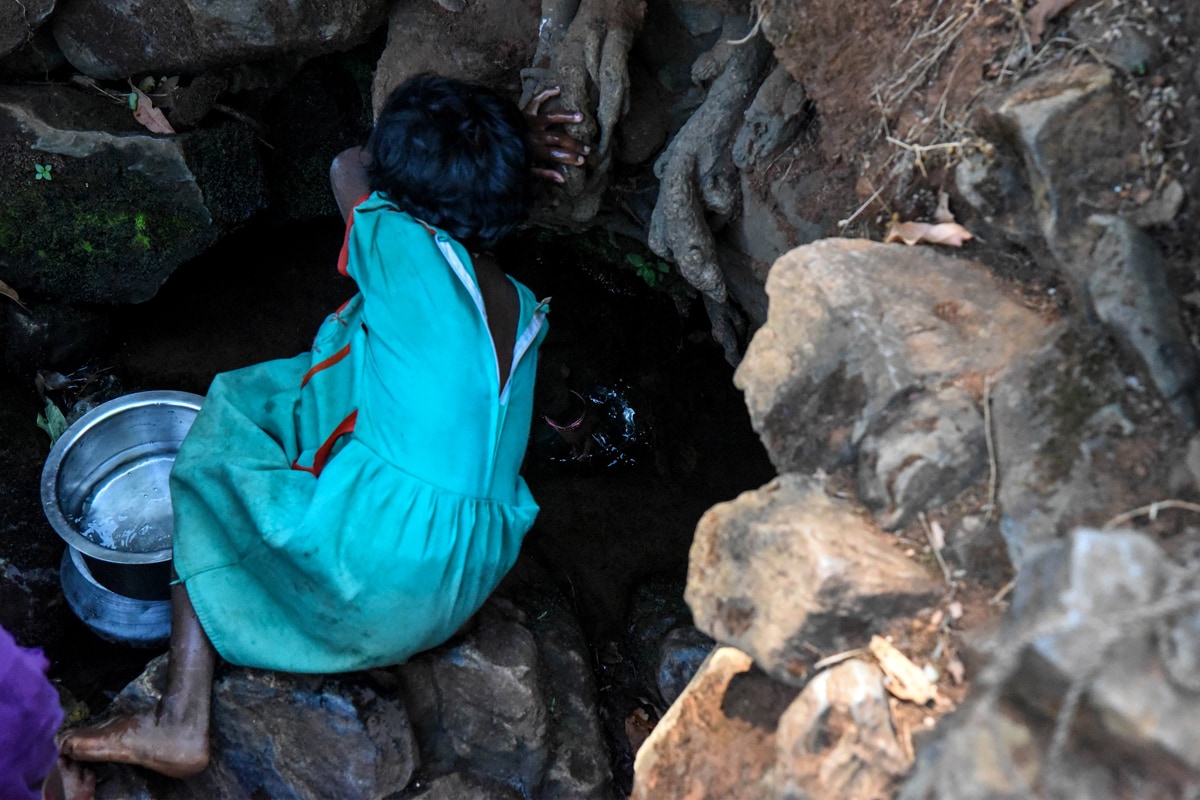