Updated : April 18, 2019 05:34 PM IST
The Nilgiris constituency of Tamil Nadu has the largest proportion of Adivasi population in the Tamil Nadu, but rights activists worry that their vote carries very little weight.
Fair and transparent Implementation of FRA, jobs, health and education are the main issues for the Adivasi communities in the region.
The local residents also point out that lack of a viable minimum support price was pushing tea growers to sell their plantations to builders leading to a concretisation of the landscape and increased conflict with wildlife.

One of the most biodiverse regions of the Western Ghats, the Nilgiris (the blue mountains) comprise a range of ecosystems including dry deciduous forests at its base, dense evergreen forests on the slopes and on the mountain tops a mosaic of stunted forests and grasslands. Over 3000 species of plants, 350 species of birds and 100 species of mammals occur in this region because of which the Nilgiris have been declared a biosphere reserve and comprise protected areas such as the Mukurthi National Park and the Mudumalai Tiger Reserve.

The Nilgiris are also home to six ancient indigenous communities and tribes – Badagas (traditionally settled agriculturists and the largest numerically), Todas (pastoralists occupying the upper plateau), Kotas (artisans) and Irulas, Kurumbas and Paniyars (hunter-gatherers, who also practice settled agriculture now). While the tribal and indigenous communities face multiple challenges, the residents appear to have little faith in the upcoming Lok Sabha elections addressing any of their problems.

The Lok Sabha constituency of the Nilgiri mountains in Tamil Nadu, includes popular hill towns such as Ooty (Udhagamandalam), Gudalur and Coonoor and towns such as Mettupalayam, Avanashi and Bhavanisagar that connect the region to the plains. 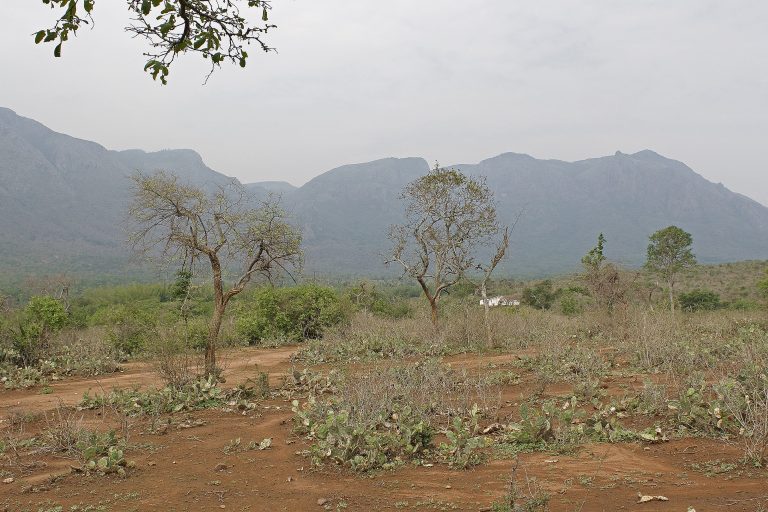 The Nilgiris seen from the wildlife corridors of the Mudumalai Tiger Reserve. Photo by S. Gopikrishna Warrier/Mongabay.

In the 19th century, the British began clearing forests for tea and cultivation and started planting exotic trees, a practice continued by the independent Indian government, decimating the region’s unique high altitude grasslands. The lower reaches, such as Gudalur division were cleared for tea and other commercial crops, in the process driving out Adivasi (tribal and indigenous) communities from their homes in the forest. Bereft of access to forest resources such plants for indigenous medicines and land for growing food, the Adivasi communities in the region were forced to mostly work as low wage labourers in plantations.

K.T. Subramaniam, the secretary of Adivasi Munnetra Sangam (AMS), an Adivasi collective from the Gudalur town and its surroundings, feels this history is crucial for understanding what elections mean to indigenous peoples in the region. “Gudalur was once an area with only forests and Adivasis like us,” he said. “Our forests were intact, we were self-sufficient and we had dignity of life,” Subramaniam said. The steady entry of outside settlers (some rich farmers and landed castes and others poor landless labourers seeking work and opportunity) changed the demographic massively. “Adivasis are now a minority.”

According to the 2011 Census data, about 4.6 percent of the population of the Nilgiris district is now scheduled tribe and the 32 percent are scheduled caste.

The changes in the landscape, especially the destruction of forests and loss of access to the remaining patches led to a series of problems that Subramaniam said continue to this day. “When the forests went Adivasis lost access to food sources and traditional medicine,” said Subramaniam. “Forced to work as labour in plantations where they faced ill-treatment and received poor pay, eventually most Adivasi communities here faced health risks, high rates of infant mortality and no access to education he explained. The police and the forest department would continuously harass us, framing us with false charges.” In the Nilgiris upper plateau only relics of the shola-grassland ecosystem exists. While the shola forest is in the foreground of the picture in the background are the soft-wood plantations done by the forest department over decades. Photo by S. Gopikrishna Warrier/Mongabay.

It was in the face of these problems that AMS began in 1986 and started small collectives in tribal villages in Gudalur so that different tribes could unite and ask for rights. While the communities have made some strides in the region since then, especially in access to primary education, several problems continue according to M. Alwas, who heads the Nilgiri Adivasi Welfare Association.

“The state government has done some good work in the education front. For example, they have provided new English medium schools for the tribals,” he said. “But many things are missing. Fifty percent of the government tribal residential schools are not functioning. The buildings need repair. Teacher training has not been done.”

The bigger problem, however, is the lack of jobs for educated tribals. “We have 300-400 postgraduates in the Adivasi communities unemployed even though there are vacancies in the government. They are not filling the vacancies,” Alwas pointed out. 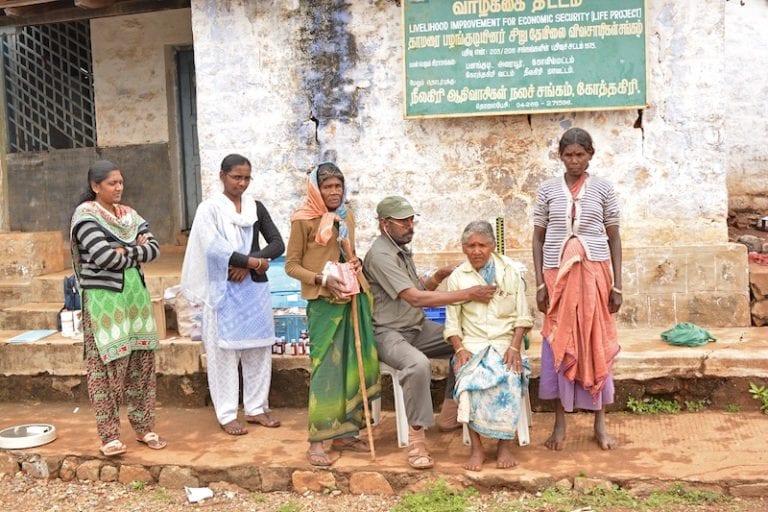 A medical team from the Nilgiri Adiwasi Welfare Association in a Kurumba village. Photo by S. Gopikrishna Warrier/Mongabay.

In 2006, the United Progressive Alliance Government passed the Forest Rights Act (FRA) – a law that acknowledged the historical injustices that had been meted out to Adivasi communities and promised to restore their traditional rights over forests. “If implemented properly, the FRA could have been a good measure for the tribals in Nilgiris,” said P. Chandran, the coordinator for tribal rights and welfare at the Keystone Foundation in Kotagiri.

Chandran, who is from the Kurumba community, works on creating awareness of the Act among the indigenous communities in Kotagiri and Ooty and helping them file claims to individual and community forest rights. According to a report by a Chennai based consulting firm Samanvaya in June 2017, the Nilgiris district had filed 1998 individual and community forest right claims at the gram sabha level, but only 756 claims made it to the sub divisional level committee (SDLC) and only 505 claims (which included no community forest rights) reached the district level committee (DLC). It was not that the others were rejected, they were simply not processed yet.

Chandran, who is a member of the DLC for supervising claims in Nilgiris, pointed out that the bureaucracy would come up with arbitrary processes that would impede the application process. “After all the claims are collated and confirmed by the village level forest committee, it has to go to the SDLC and then to the DLC. But the SDLC recently came up with a rule that only the village officer was allowed to collect the applications from the village level committee and submit it to them. This is an arbitrary rule. Each time something like this happened, we would have to go the district collector who would have to resolve the issue,” he said. P. Chandran (right) of the Keystone Foundation in conversation with a Toda elder. Photo by Bhanu Sridharan.

There seems to be even more reluctance to grant community forest rights in the region. Community forest rights pertain to rights for a community to collect certain non-timber forest products such as herbs or fruits and market it themselves, to celebrate festivals or worship at temple shrines which are often deep inside forests, and importantly rights to manage and conserve the forest through forest management committees (FMC). “Community rights are also important because they allow Adivasi villages to build facilities such as primary health centre or a school, which they otherwise don’t have,” explained Chandran.

Even these claims were not granted according to the rules, he explained citing an example of a community forest rights application in Masinagudi.

“In Masinagudi there were some tribal villages which asked for community rights to the surrounding forest. But government officials instead declared that playgrounds and wells already in their village would be granted as part of community rights,” said Chandran. Subramaniam and Chandran both independently noted that the area of land recognised individual claims were substantially lower than asked. “The claim will be for around two or three acres, but they will give away few cents (100 cents is equal one acre),” said Subramaniam.

Environmental activists blamed shrinking forest cover and a push towards real-estate development for the conflict with wildlife. “Politicians have allowed so much land in the Nilgiris to be converted into buildings,” said K. Ramdas an environmental activist based in Kotagiri. With the buffer of tea plantations disappearing, habitation started coming up closer to the forest leading to more human-animal conflict he explained. K. Ramdas (centre) with other villagers in Banagudi shola near Kotagiri. Photo by S. Gopikrishna Warrier/Mongabay.

Ramdas blamed this partly on the Tea Board of India (controlled by the Central Government). Most tea plantations in the Nilgiris are owned by small tea growers from the Badaga tribe. There are approximately 45,000 tea growers in the Nilgiris who have been agitating for a better minimum support price for green tea for several years. While farmers have been demanding a minimum of Rs 30 per kilogram, the Tea Board of India has set a price of Rs 17 per kilogram.

“They [the tea growers] are suffering huge losses. So, they cannot resist real estate offers and sell their land,” he said. “Most of this real estate development is for tourists,” he said adding that an increase in tourists have led to an increase in vehicles. “This is leading to air pollution.”

The final nail in the coffin according to Alwas has been the spread exotic invasive tree species in the grassland ecosystems of the higher reaches of the Nilgiris. “The forest department spent so much time promoting wattle and blue gum (eucalyptus) in our grasslands destroying out grazing lands,” he said.

According to a study published in 2019, exotic plantations had replaced most of the high altitude grasslands in the Nilgiris, endangering the pastoral culture of the Toda tribe as well as the existence of endemic fauna like the Nilgiri tahr and Nilgiri pipit.

In 2019, the Madras High Court formed an expert committee to look into removing exotic tree plantations from the Nilgiris. “The exotic plantations must be removed and natural forest and grassland must be brought back. This will benefit Adivasi communities who need forests,” said Alwas. “But candidates are not aware of such issues at all.”

Subramaniam is not particularly optimistic that Adivasis in the region will sway candidates in the region. “It doesn’t look like the Adivasi vote counts for much, especially at the Lok Sabha level. Our votes don’t have much pull, because we are too few in number,” he said. “But we will still vote.”