Narmada, the forgotten river, is not on anyone’s agenda

Updated : April 19, 2019 05:54 PM IST
Narmada is an important river in Gujarat but is suffering from pollution, lack of freshwater and dumping of untreated sewage into it.
The future and welfare of thousands of farmers and fisherfolk in Gujarat, who are dependent on the river, is in peril.
The issue of cleaning of Narmada river and ensuring proper flow in it is not on the priority list of any mainstream political party.

Sanjaybhai Machhi, 33, a resident of Bharuch in Gujarat, was a fisherman until a few years ago. He would earn enough from fishing in the Narmada river, to sustain his family. But now things have taken a turn for the worse and Sanjaybhai has had to switch professions to earn a living. With heavy pollution, seawater ingress and lack of release of water from the Sardar Sarovar dam, fishing in the Narmada is no longer a lucrative occupation. Sanjaybhai is now an auto rickshaw driver and his wife works as domestic help.

The population of the fisherfolk community in Bharuch is estimated to be about 25,000 to 30,000 and seemingly Narmada is not a priority for any of the major political parties in fray for the 26 Lok Sabha seats of Gujarat where polling is scheduled on April 23.

“I got into the fishing business when I was 18-years-old and fishermen here used to get hilsa in the waters of the Narmada river. Due to heavy demand for hilsa the fishermen used to earn decent money throughout the year. In the monsoon season (three months), some people used to earn Rs. 4-5 lakh (Rs. 400,00-500,000) which was equal to their average income of 6-7 months. But over the last four-five years, the fishing business has come to a halt and I am forced to drive an auto for a living,” Sanjaybhai Machhi told Mongabay-India.

In parliament, Bharuch is represented by Bharatiya Janata Party (BJP) leader Mansukhbhai Dhanjibhai Vasava since 1998, for the last five terms, but several complaints to him to take up the issues of the fishing community has yielded no result. Mansukhbhai Vasava is seeking re-election from the constituency.

“We have gone to all major political parties but there is none to listen to our issues. We are a small group which has no major influence beyond our area. We have gone to our local parliamentarian as well as well but nothing happened,” said Mahendrabhai Machhi of the Samast Bharuch Zila Machhimar Samaj (local fishing community group). Fisherfolk state that the lack of freshwater in Narmada in Gujarat is impacting their livelihood. Photo by Mayank Aggarwal/Mongabay.

Mongabay-India visited the banks of the river Narmada in Bharuch where hundreds of unused boats are lying deserted.

“Some fishermen still try to go for fishing but their boats get stuck on the banks. Even when they are successful in going to the river they get nothing. Already the river Naramada had poor flow of water, what has made it worse for us is the dumping of untreated sewage and polluted water from the industries in the nearby region. This is the condition of our people and there is no one to listen to us,” Mahendrabhai Machhi explained.

Originating from the Amarkantak range in Madhya Pradesh, Narmada is the fifth largest river in India and the largest one in Gujarat. It traverses Madhya Pradesh, Maharashtra and Gujarat and meets the sea in the Gulf of Khambat after covering a distance of 1,312 kilometers (815 miles). In Gujarat, the river covers a distance of around 160 kilometres.

M.S.H. Sheikh, who is the president of the Brackish Water Research Centre, a Surat-based non-governmental organisation, explained that one of the main factors behind the present condition of the Narmada river is that freshwater is not being released into the river from the Sardar Sarovar Project.

“Neither the Sardar Sarovar Narmada Nigam Limited nor the Gujarat government has any scientific study to decide how much water should be released or not. Lack of freshwater has severely impacted the brackish water formation (formed due to mixing of freshwater and saline water), which is an ideal breeding ground for fishes. The lack of fish breeding has seriously impacted the fishing community,” Sheikh told Mongabay-India.

“It has become a salty river right now because whatever freshwater is released is either evaporated or sucked out by private industries. The water of Narmada river is now not reaching the sea as it is now diverted for industry and to other areas. The issue of Narmada river has been raised at many fronts by the affected people but neither the central government nor the state government is sensitive to this issue,” he said.

“A lot of fishermen from Gujarat are in Pakistani jails because they are caught while they go to fish in the sea where the water of Indus river meets the sea. In Gujarat, the freshwater discharge of rivers like Narmada, Tapi or Mahi into the sea is zero. Officials of the Gujarat government considers letting the freshwater going to the sea a wastage – what to do to handle such mentality?” Sheikh added.

Narmada is now a seasonal river

On April 13, environment NGO Paryavaran Suraksha Samiti, sent an email to the Narmada Control Authority, Union Environment Ministry, Central Pollution Control Board, the Gujarat government and the Gujarat Pollution Control Board highlighting that the “perennial river Narmada has been converted into a seasonal river” and it emphasised that the river is being slowly killed by pollution from industries, seawater ingress and from untreated sewage. In the email, the NGO highlighted that a recent investigation by them revealed that the impact of the Sardar Sarovar Dam on the ecology of the Narmada river, its biodiversity and fishery, and hundreds of thousands of people living close to and dependent on the river directly or indirectly was never fully considered.

“This, in turn, has led to its present disastrous state. The Statue of Unity project (a statue of India’s first home minister Sardar Patel) is built in the middle of the river without any impact assessments, public consultations, appraisals or clearances and now huge tourism related projects unfold around this statue … Narmada River is now ending at village Garudeshwar instead of the Arabian Sea,” said the email while highlighting that industrial effluents are being discharged into it from areas like Ankleshwar, Jhagadia and Panoli.

It also cautioned that the proposed Bhadbhut Barrage project which aims to stop salinity ingress will add further to the problems and destroy the entire estuary and livelihoods of even more people.

It demanded that the authorities to immediately release 4,000 cusec (cubic metre per second) of water from the Sardar Sarovar project in downstream Narmada River till independent and credible studies are conducted for ascertaining ecological flows in the downstream of the Narmada River. It also sought formation of an expert committee for assessing the sustainable ecological flow in Narmada for different seasons to ensure that it does not dry up in the downstream stretch up to the Gulf of Khambhat.

The communication also sought an immediate stop on discharging of untreated sewage and industrial effluents into the river and a monetary compensation for farmers, villagers, and fishermen who are suffering from the degradation of water quality of river Narmada.

PSS warned the authorities of legal action in case the latter fails to take immediate action.

Not a high priority issue

While cleaning of Ganga river is a political hot potato for the mainstream political parties like the BJP and the Indian National Congress, rivers in Gujarat, which accounts for 20 of the 351 polluted river stretches identified across India, are not high on any national party’s agenda. 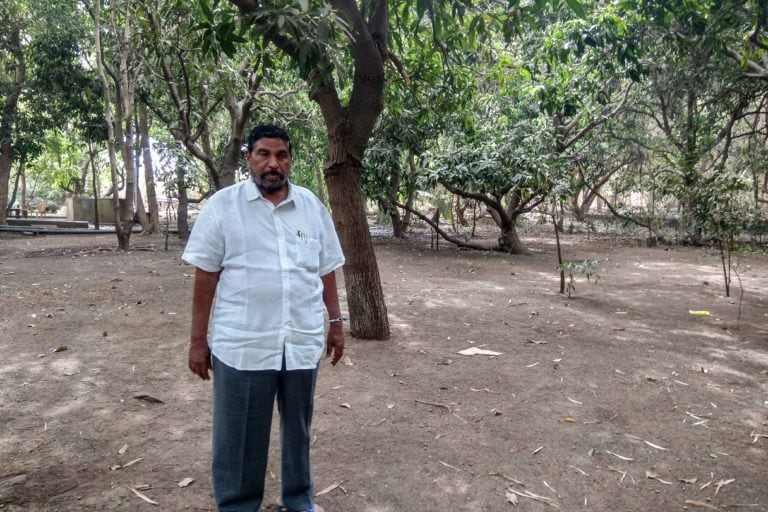 Congress, which is the principal opposition party in Gujarat, maintains that pollution in rivers of Gujarat and water related issues faced by people is on top of its agenda. But people of Bharuch are not convinced.

Mahendrabhai Machhi of the fishers union Samast Bharuch Zila Machhimar Samaj said all that they have got from most of the political parties are assurances, but no real action. “No one is concerned about a small group,” he said.

However, noted tribal leader and chief of the newly formed Bharatiya Tribal Party, Chhotubhai Amarsinh Vasava, said the issue of fisherfolk is on top of their agenda. At present, he is the member of the Gujarat Legislative Assembly from the Jhagadia assembly seat, which is part of the Bharuch Lok Sabha seat. He is contesting the 2019 elections from Bharuch seat.

“The Narmada river is dry and severely polluted. It has impacted thousands of farmers and fishermen. If the government fails to stop pollution and ensure the release of enough water in it, we would launch a huge agitation,” Vasava told Mongabay-India.