Updated : September 26, 2019 08:59 AM IST
The 10 wealthiest persons in this list now have a net worth equivalent to 10 percent of the country's gross domestic product (GDP).
Mukesh Ambani tops the list for the 8th consecutive year, with his net worth increasing 3 percent this year.
Technology-led ventures, new economy and start-up founders-turned-investors were the new class of wealthy Indians in 2019, with 16 of them under the age of 40 making it to the list.

It might sound counterintuitive at first, but India's wealth creation story clearly seems to be bucking the slowdown in the economy. That is evident from the number of new additions to the IIFL Wealth Hurun India Rich List 2019, according to which 953 Indians currently have a minimum wealth of Rs 1,000 crore, up by a third in the last two years.

The 10 wealthiest persons in this list now have a net worth equivalent to 10 percent of the country's gross domestic product (GDP). The list encompasses individuals from 41 industries, with the average individual on the list 60 years, and average wealth Rs 5,300 crore.

However, while the cumulative wealth with these individuals went up by 2 percent vis-a-vis last year, the spread of this went down, as the average riches with them went down by 11 percent, with 344 persons, or over a third of the individuals on the list witnessing an erosion in wealth.

Sectorally, pharmaceuticals (137 individuals), software and services (73 individuals) and fast-moving consumer goods (FMCG) (59 individuals) were areas which contributed the most number of rich Indians to the list.

The top 10 remains populated by the usual stalwarts. Mukesh Ambani tops the list for the 8th consecutive year, with his net worth increasing 3 percent this year, Azim Premji of Wipro in the second spot with a growth of 22 percent in wealth, LN Mittal and family which saw their wealth decline by 6 percent, and Gautam Adani and family, a new entrant to the top 5, growing his wealth by 33 percent. 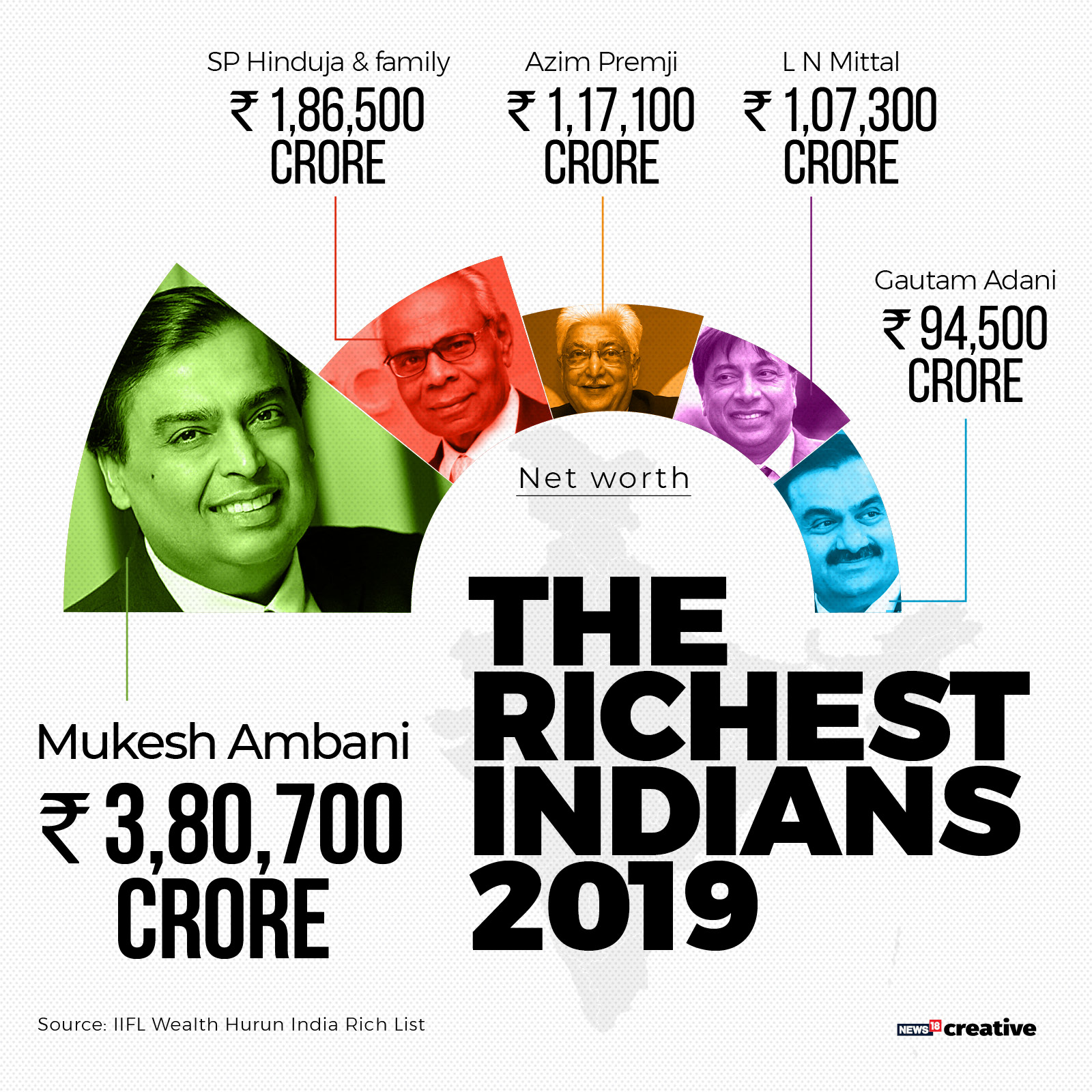 While these are well-known stalwarts from traditionally wealthy sectors, the most revealing trend in the eighth year of the report is the diversity in new wealth creators on the list.

Technology-led ventures, new economy and start-up founders-turned-investors were the new class of wealthy Indians in 2019, with 16 of them under the age of 40 making it to the list. All the top five fastest creators of wealth are from unicorns such as Oyo, Udaan and Byjus. Start-up founders turned investors who have now started their own venture capital houses, such as Flipkart, are leading wealth creation in the new economy (investing) space.

The youngest self-made entrepreneur on the list is Ritesh Agarwal (25) of Oyo Rooms with a net worth of Rs 7,500 crore, while the wealthiest is Divyank Turakhia (37) of Media.net. Other founders/investors on the list include Ankit Bhati and Bhavish Agarwal of Ola Cabs, Sachin Bansal and Binny Bansal of Flipkart, Deepinder Goyal of Zomato, Amod Malviya, Vaibhav Gupta and Sujeet Kumar of Udaan, Nithin Kamath of Zerodha among others. The richest self-made Indian under 40 was Dubai-based Dviyanshu Turakhia (37) of Media.net, with a net worth of Rs 13,000 crore.

While the number of women in the India rich list grew in 2019, at 152 women, their representation on the list is still nowhere close to equal, forming just about 16 percent of the total number of individuals.

However, this is still a marked leap from 2011, when only six women made it to the list. The richest self-made woman in India is biotechnology queen Kiran Mazumdar-Shaw of Biocon with a net worth of Rs 18,500 crore. Roshni Nadar of HCL, however, is the only woman in the top 20. Kiran Nadar and Smita C Krishna of Godrej are the other women in the top 50. Around 40 percent of the women in the list derive their wealth from pharmaceuticals, software & services and FMCG sectors.

Other key highlights from the report show that there were 29 new US dollar billionaires in 2019, taking the total tally to 138 Indians, while 5 individuals lost their dollar billionaire status this year. There were also 13 non-promoter CEOs on the list, two of which are Indian residents. The average wealth of the individual on this list is 60, and the average wealth with them is Rs 5,300 crore. While the list encompasses 61 cities, it is Mumbai and Delhi which emerge as the hub of the rich and the famous

This year of the list also saw some legendary entrepreneurs exiting the Rich List for the first time. This includes Jet Airways founder Naresh Goyal, following the airline’s debacle and consequent proceedings with the bankruptcy court.

Anil Ambani, brother to chart-topping industrialist Mukesh Ambani, crashed out of the list too. The equity value of Ambani's listed business empire has declined to Rs 2,000 crore, and if one were to exclude the pledged shares, the equity value is Rs 584 crore.

The meltdown of Infrastructure Leasing & Financial Services (IL&FS) caused mutual funds, the prime lenders to NBFCs, reduced the exposure to NBFC, resulting in a credit squeeze. Since August 2018, DHFL shares declined 93 percent and is undergoing financial stress as its ability to raise funds has been substantially impaired.