When Chandrika Tandon first came to America at the age of 24 to interview for a job at McKinsey & Company, she had no American degree and no green card. She did not even own a western outfit, interviewing in a sari and chappals, wearing a borrowed coat.  Yet within a few years she went on to become a partner at this prestigious company, the first Indian-American woman to be selected.

When Chandrika Tandon first came to America at the age of 24 to interview for a job at McKinsey & Company, she had no American degree and no green card. She did not even own a western outfit, interviewing in a sari and chappals, wearing a borrowed coat.  Yet within a few years she went on to become a partner at this prestigious company, the first Indian-American woman to be selected. 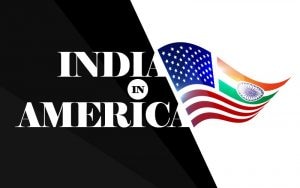 In the early 1990s, she risked her savings to found Tandon Capital Associates, a financial advisory company, restructuring preeminent financial institutions worldwide, and creating billions of dollars in market value for her clients. It was a hard, challenging road.
Jump to the present – Chandrika Tandon – now a business leader, Grammy-nominated artist and philanthropist – is set to receive the 2019 Horatio Alger Award for Distinguished Americans. The award honours outstanding leaders who have accomplished great successes in spite of adversity. Chandrika Tandon.
Chennai Beginning
Tandon’s life story is a classic example. Growing up as the first girl child in a traditional Tamil Brahmin family in Chennai, she was made to understand that an early arranged marriage was her destiny, with her mother gathering stainless steel utensils from birth, for her eventual trousseau right when she was sixteen.
She went on a hunger strike to be allowed to go to the college of her choice and in 1973, she graduated with a bachelor’s degree in commerce from Madras Christian College. When it came to business school, she was actually one of only eight women in her batch at IIM Ahmedabad, at that time an-all male bastion.
Her first job was with Citibank and it took her to war-torn Beirut, a place with curfews, burning streets and blasts. She remembered that a movie theatre she and her friend visited was destroyed the very next day.
Tandon grew up in a middle-class family where the children despite simple beginnings went on to scale greater heights – (her sister Indra Nooyi has been the president and CEO of PepsiCo and her brother Nandu Narayanan heads Trident Investment Management). Her belief in education as a game-changer has made her take a pro-active role in higher education, especially for those in need.
Through the Krishnamurthy Tandon Foundation, she and her husband Ranjan Tandon have donated to many educational causes, including a very transformative $100 million to the NYU (New York University) Tandon School of Engineering. 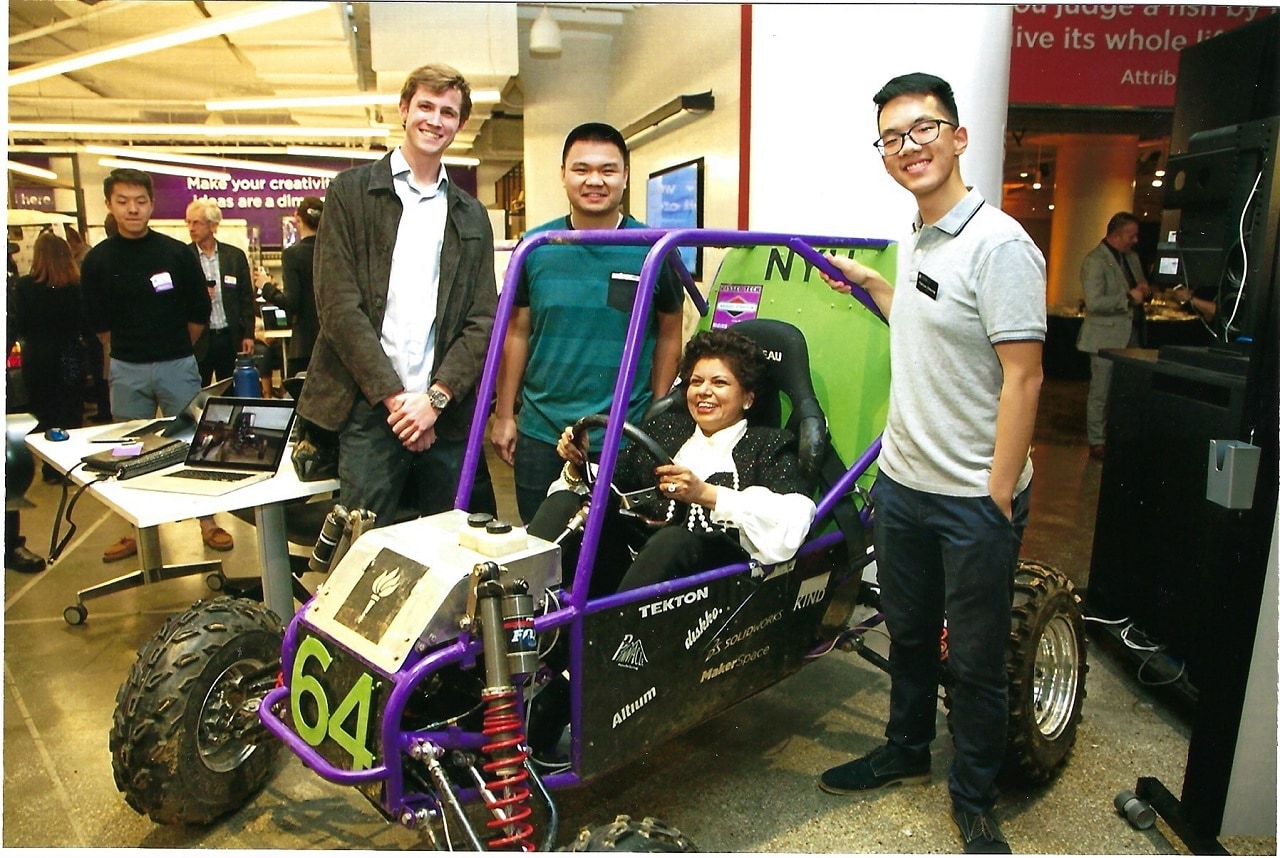 Chandrika Tandon checks out the innovation of students at the School of Engineering.
Tandon is vice-chairman of the Board of Trustees of NYU, chairman of the NYU President’s Global Council, and chairman of the NYU Tandon School of Engineering and serves on the Business School and Medical School/ Hospital Boards. Their commitment to education also extends to leadership faculty chairs they have established at the Harvard Business School, Yale, IIMA and Madras Christian College in India.
In 2009, she received the Walter Nichols Medal from NYU Stern for representing the highest ideals of business, service and integrity - prior recipients include Rockefeller, Greenspan and Welch. In 2016 she was awarded the Gallatin medal, NYU’s highest honour.
Grammy Honour
Yet Tandon is about much more than business or education – she also proves that you can nurture and enrich a God-given talent in the most difficult situations. She grew up in a home that thrived on music but she never got the opportunity to follow that path as she pursued her business education. Yet in spite of time constraints, she managed to find noted gurus and pursued classical music even as she grew her business and nurtured her family.
She is a Grammy-nominated musician. Her fourth album, Shivoham the Quest, is a collaboration of over 275 world-class musicians across four continents, recorded largely in London, and mixed in New York. As she says, “Music is what I am, everything else is what I do.” Chandrika Tandon receives the Gallatin Medal from NYU president Andy Hamilton and chair of the board Bill Berkley.
Tandon is a big believer in intense meditation:  “It took me into the deepest parts of myself and let me experience my own light. Once you even glimpse that place you are on a new journey.” Business, arts and philanthropy can all be accommodated in a balanced lifestyle. Tandon also serves on the Board of Trustees for the Lincoln Center for the Performing Arts and the President’s Advisory Council for the Berklee College of Music. She has opened new musical worlds for students through the Berklee Tandon Global Clinics – many pilots have already occurred in India impacting thousands of students.
Music and spirituality have been the twin graces of Tandon’s life, be it starting the day with pranayama or creating a musical choir for seniors at the Hindu Temple Society of North America. She has also founded the Hindu Community Outreach Initiative for youth and seniors, donating buildings and programme support for after-school classes, health and community building. Justin Trudeau receives honorary degree of laws at NYU, escorted by Chandrika Tandon.
She says, “If I had to rewind my life, I would add more compassion to it. For me, it’s become almost a meditation. I try to apply it in everything I do in my life.  It really changes the way you think about people, how you spend your time. It changes relationships within the family and it changes the relationship with yourself. This feeling of compassion allows you to give completely of yourself.”
This path of service is what transforms life and helps all the pieces to fall into place, like a giant jigsaw puzzle. Life is certainly much more than the next big business deal or the next acquisition. Tandon was the first female partner at McKinsey to give birth and bringing it full circle, her daughter Lita, who also works at McKinsey, gave birth to her first child, making Tandon a recent grandmother.
For Tandon, the joy is in being able to be a mentor to so many young people in the schools and colleges she supports. She points out that NYU Tandon with over 5,200 students, has many students who are from first generation families, a high percentage of students on aid, and many female students: She says: “We are changing not just individual lives but we are changing generations.” 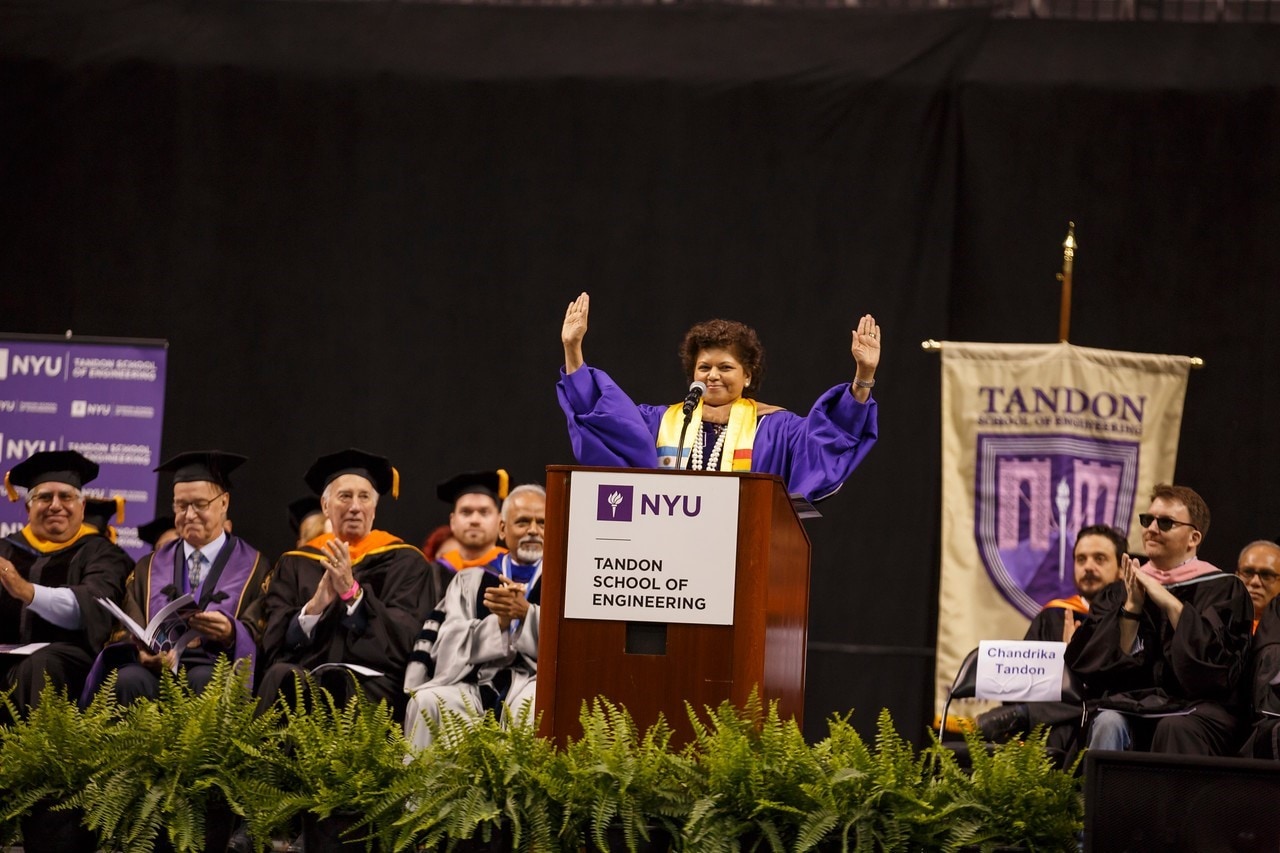 Chandrika Tandon, Chairman, NYU Tandon School of Engineering.
“Ms Tandon defines tenacity and boldness – characteristics that many of our Scholars also embody,” says Terrence J Giroux, executive director, Horatio Alger Association. The organisation is honouring Tandon along with 12 other noted names who have overcome adversity to achieve success. They are great mentors for the young people in its scholarship programme who have critical financial need and have shown determination in overcoming adversity.
Since 1984, the Association has awarded around $159 million in college scholarships to more than 25,000 deserving young people. Tandon and the Member Class of 2019 will be formally inducted into the Association on April 4-6, 2019, during the 72nd Horatio Alger Award Induction Ceremonies in Washington, DC for both mentors and student-scholars.
For Chandrika Tandon, the pieces of the jigsaw puzzle fit perfectly: “We are custodians of the planet and we are here for a very short time.  At the end of the day, we have to make our corner of it much better. That’s our job. ”
Lavina Melwani is a New York-based journalist who blogs at  Lassi with Lavina.
Check out our in-depth Market Coverage, Business News & get real-time Stock Market Updates on CNBC-TV18. Also, Watch our channels CNBC-TV18, CNBC Awaaz and CNBC Bajar Live on-the-go!